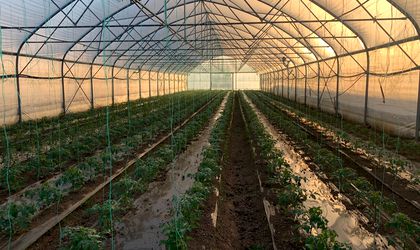 The way we choose our food has always had an important role in maintaining health, and before it was a trend, which first appeared in Western countries and then in our country, the consumption of „bio” products is today a necessity.

Good news in this direction comes from the Ateliere Fără Frontiere Association which, in 2015, launched the “bio&co” social farm project, developed in the Ciocănari village in Niclești (Dâmbovița county). In addition to the fact that several categories of vegetables are produced here – such as tomatoes, cucumbers, peppers, eggplants, lettuce, spinach, pumpkins, green onions or some more special ones: arugula, kale, mustard -, the Association also offers stable jobs for marginalized people, with no real chances to be employed on the labor market.

“Vegetables are grown in Ciocănari by vulnerable people from the village, who, before being part of this project, lived on the edge of poverty due to lack of a job. We created this farm to give them a better life and to grow everything the way it was done in the old days – naturally. All are distributed locally, every Wednesday, in the form of a subscription”, says Andreea Despa, head of the bio&co farm team, currently 12 people being employed at the farm.

Located on five ecologically certified agricultural hectares, of which 4,000 square meters of solariums (for a production 52 weeks a year), the farm obtained ecological certification including for the 80 varieties of cultivated vegetables.

Weekly, the obtained production is distributed to 100 customers in Bucharest and Ilfov, and each basket – ordered on the basis of a subscription – has between four and six varieties of vegetables. In order to encourage the consumption of these particularly important products for maintaining health, the prices vary depending on the type of vegetables the customers opt for and the quantity, from 55 lei to 85 lei for a “Bio&co” basket.

Deliveries are made to the headquarters of companies that have several subscribed employees, but also to 14 delivery points located in the center and in several neighborhoods of the Capital that can be found on the farm’s website.

“We want, most of the time, customers to pick up the products at certain collection points, to reduce the carbon footprint. The local production and distribution of food according to the farm to fork principle reduces the environmental impact by reducing the carbon footprint and ensures the freshness of vegetables, without the need for plastic packaging and the involvement of a distribution chain”, says Damien Thiery, general director of Ateliere Association Without Borders.

It goes without saying that social agricultural farms, as is “bio&co”, represent a real solution for the strategic objectives of Romanian and European agriculture, as well as for those aimed at the sustainable and inclusive development of rural areas, generating jobs , sustainable agriculture and economic growth in the countryside, but also a healthy diet for consumers. Organically certified vegetables are increasingly appreciated and sought after on the local market, in the context where the certification offers a guarantee for the health of the consumer.

According to European Commission data, only 3.5% of Romania’s agricultural area is ecological, and the growth potential is 62% in the next nine years. Moreover, at European level, in this time frame, the objective is to reach a rate of 25% of agricultural land. “One of the goals of the bio&co farm is to educate and sensitize the consumer to create a balance between the amount they consume and the amount they buy. Over time, if food waste is avoided, the cost of food can be reduced and invested in quality vegetables. We really want to produce as much as is necessary to avoid food waste”, adds Lorita Constantinescu, Development Director.

Closely related to this social farm is another pilot project, a pedagogical farm based on healthy food, biodiversity, environmental protection and sensorial discovery for children.

Furthermore, the Ateliere Fără Frontiere Association is in permanent contact with farmers who want to develop projects in organic farming in the hope that, in the coming years, such organically certified farms will develop nationally and thus the number of consumers will increase.