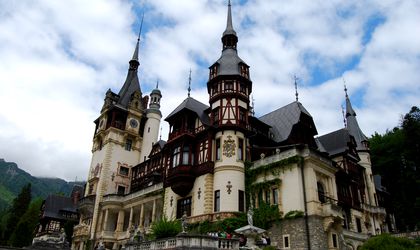 Tucked away in the forests surrounding the Romanian mountain town of Sinaia, Peles Castle is a one-of-a-kind piece of local history. BR takes a look at what this tourist attraction has to offer visitors and the events taking place there this fall.

“The Royal Castle stands amongst other monuments, in an extremely pretty landscape with gardens built on terraces, all at the edge of dense forests. The castle itself is very impressive owing to the riches it has accumulated: old and new canvases, antique furniture, weapons, all sort of curios, and with everything arranged with good taste. We took a long hike in the mountains; afterwards we picnicked on the green grass, surrounded by Gypsy music. We took many pictures, and the atmosphere was extremely pleasant.” So wrote Kaiser Franz Joseph I of Austria in a letter on 2 October 1896, describing a visit to the property. After more than one hundred years, little seems to have changed. People from all around the world come to see the beautiful Neo-Renaissance castle in the Carpathian Mountains, near Sinaia, in Prahova County. Most of them share the same opinion as the Austro-Hungarian emperor, which many voice in online reviews on the most popular travel websites.

Peles Castle was built at the initiative of Romania’s King Carol I, to serve as a summer residence. The most important event hosted by Peles Castle up until the abdication of King Michael I, in December 1947, was the celebration of the semi-centenary of the castle in 1933, according to museum officials.

From January to March 1948, the castle was closed at the order of the communist authorities and its historical assets were inventoried. Most of its paintings, furniture, textiles, decorative artworks and books were transferred to the National Art Museum in Bucharest. That same year, in May, other assets were handed over to various cultural institutions around Romania, in Bucharest, Brasov and Sibiu. Since 1953, the castle has been a National Museum, open to the public, while the other estates making up the Peles domain became boarding houses for writers, artists and musicians approved by the communist regime. These are Pelisor Castle, the private residence of the second royal couple, Ferdinand I and Marie, and Foisor Castle, the former hunting lodge belonging to the first King of Romania and the residence of Kings Carol II and Michael I.

Since 1990 and1993 respectively, Peles and Pelisor castles have been reopened to visitors. In 2007, after five years of negotiations between the Romanian state and the Royal Family, an agreement was reached and the two castles, as well as the entire Peles area, including the former royal outbuildings, officially became King Michael I’s property, but continue to be administered by the state.

Throughout its history, the castle has hosted some major figures, from royalty and politicians to artists. Romanian composer George Enescu, French actress Sarah Bernhardt, French violinist Jacques Thibaud and Romanian writer Vasile Alecsandri visited often as guests of Queen Elizabeth of Romania, also known by the pen name of Carmen Sylva for her writing. In later years, many foreign notables such as US presidents Richard Nixon and Gerald Ford, Libya’s Colonel Muammar al-Gaddafi and Palestinian leader Yasser Arafat were welcomed to the castle.

A lesson in architecture

Peles’ architectural style is a romantically inspired mixture of Neo-Renaissance and Gothic Revival similar to Schloss Neuschwanstein in Bavaria, after Carol I rejected three previous architectural proposals. A Saxon influence can be observed in the interior courtyard facades, which have allegorical hand-painted murals and ornaments in the German style Fachwerk, similar to that seen in northern European alpine architecture. The interior decoration is mostly Baroque influenced, with heavy, carved wood and exquisite fabrics.

Peles Castle has a 3,200-sqm (34,000 sq ft) floor plan with over 170 rooms, many with dedicated themes inspired by world cultures. Rooms vary by use (offices, libraries, armories, art galleries) and by style (Florentine, Turkish, Moorish, French, Imperial). All the rooms are lavishly furnished and decorated to the slightest detail.

The Gustav Klimt and Kunstlerkompanie expo will open at Peles Castle on September 15. The exhibition, which includes works by the young Viennese artists Gustav Klimt, Ernst Klimt and Franz Matsch, done at the request of King Carol I, will be open to the public until December 15. The works currently hosted at the castle were completed between 1883 and 1886 at Kunstler-Compagnie.

Kunstler-Compagnie was a painting studio active between 1879 and 1892. It produced decorative works for private and public buildings inside and outside the Austro-Hungarian Empire.

Peles Castle is the most important host of Gustav Klimt’s works in Romania. These can be grouped into three categories: the King’s Ancestors Gallery, including ancestors from the Hohenzollern House; copies of well known works; and original works which are on display in the castle’s Theater Hall or on the ceiling of the Honor Stairs.

The story of this monastery starts in the 17th century, when Prince Mihai Cantacuzino, impressed by the beauty of an Orthodox monastery in the holy lands, decided to build a monastery named after Mount Sinai. One of the aims of its location was to offer protection to those who traveled the commercial route on the Prahova River Valley. Later, in the 19th century, because of the high number of monks, a new monastery was built, called Curtea Noua (the New Court), which became the first electrically-lit place of worship in Romania.

George Enescu, who made contemporary Romanian music famous worldwide with his amazing Romanian Rhapsodies, has a special connection to Sinaia. The artist enjoyed the support of Queen Elizabeth, who, recognizing the talent of the young musician, put a room at his disposal at Peles Castle, where he could study. The artist was so impressed by the beauty of Sinaia that after a tour of the United States he decided to build a house here, which he designed himself.

Over the following 20 years, until 1946 when Enescu left Romania for good, the musician constantly returned to Sinaia, to spend a least one month a year in the town, a time dedicated to composition, between his tours of Europe and North America. Enescu’s “Glade” Villa in Sinaia ensured him the calm and peace required to create.

In 1947, the great composer donated the mansion to the Romanian state, so it could be used as a place for artists to relax and work, while he was living in Paris.