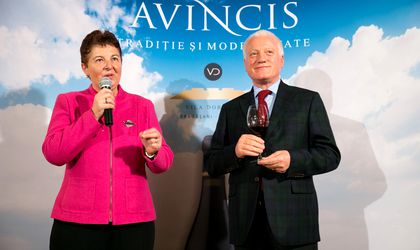 Romanian winery Avincis, owned by Romanian lawyers Valeriu Stoica and Cristiana Stoica, have launched a new wine – Cuvee Grandiflora. It is a coupage of the producer’s cabernet sauvignon and merlot, made by Ghislain Moritz, a Bourgogne wine master. The grapes comes from 2011’s harvest and have been processed using a Bordeaux winemaking method.

The red wine’s name comes from a Romanian novel, whose action takes place near the Avincis wineyard, in Dragasani town, in a famous summer garden named Grandiflora. In the same time, the name suggests a floral flavor, which can be experienced while drinking it.

Situated on the Olt left riverside, the greatest affluent of the Danube, the vineyard of Dragasani has a length of 60 kilometres, stretching between the Getic Sub-Carpathian Hills to the North and Campia Romana to the South. The dominating soils in the vineyard are made of clay with traces of limestone, of sand, of gravel and seldom of shale. The climate of the vineyard is temperate continental, with Mediterranean influences, but its main characteristic is a balanced weather. Due to its position on the Olt valley which performs a regulating influence, the Dragasani vineyard has a good humidity even in the hottest months of summer. Avincis wineyard was inaugurated in June 2011, when the wine production has started at Vila Dobrusa domain.