BR INTERVIEW | Artist Florica Prevenda: I’ve always thought that what matters is the value and not the gender you belong to 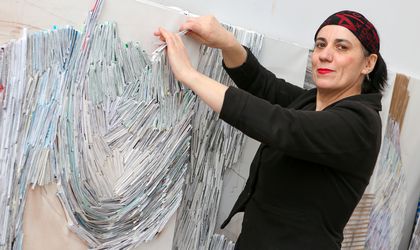 At Colonia Pictorilor / The Painters’ Colony, in Baia-Mare, one of the newest spaces of contemporary art in Romania, the artist Florica Prevenda showcases “Instances”, a celebration of her own work as a 20 years retrospective. The exhibition is part of the 120 years of Baia Mare’s artistic movement.

Please explain the context of 120 years of Baia Mare’s artistic movement and the celebration of your own 20 years retrospective.

The artistic movement in Baia-Mare has been active for 120 years, from 1896 and until now around 4000 European artists have participated in the formation of the concept “The Art School in Baia-Mare”.

Through the exchange of ideas, professional experience, professional debates, the resident artists created the favorable framework for the development of a painting school with international values.

The exhibition “Florica Prevenda – Instances” (Hypostasis), has had the chance to be scheduled during the events dedicated to the 120th anniversary of the Baia Mare school, a place which is opened to the world, to intercultural dialogue, aspects which permanently defined The Painters’ Colony from Baia-Mare.

“Instances” means “Hypostases”, the professional hypostases that marked my professional path in the last 20 years. 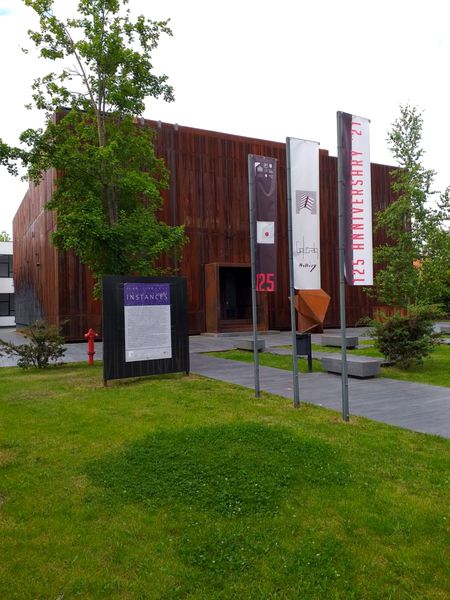 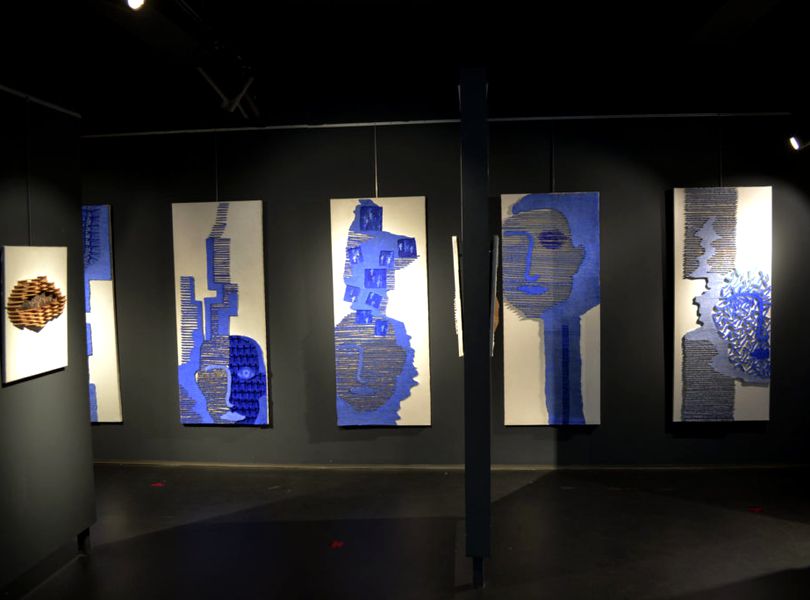 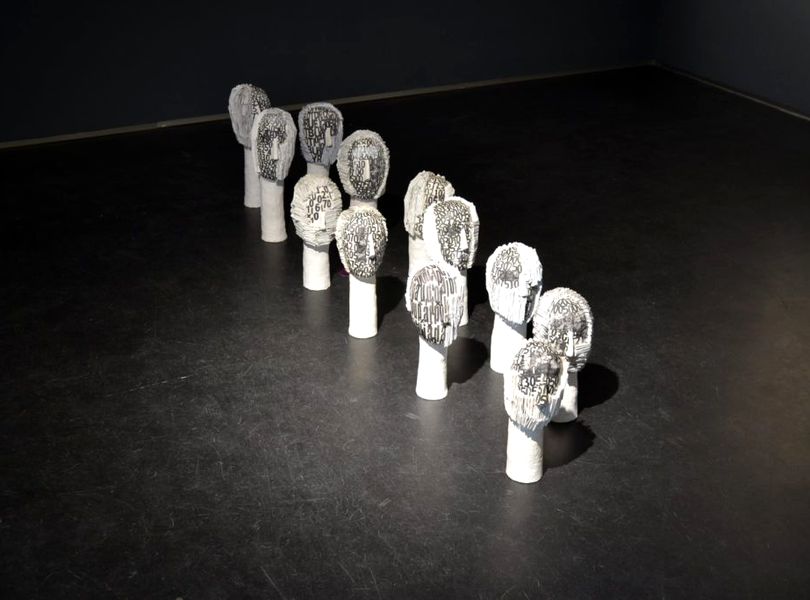 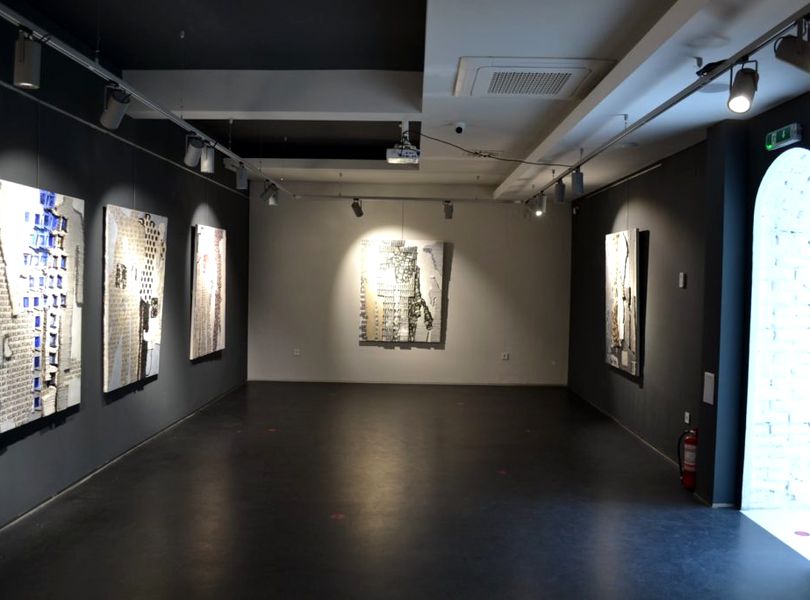 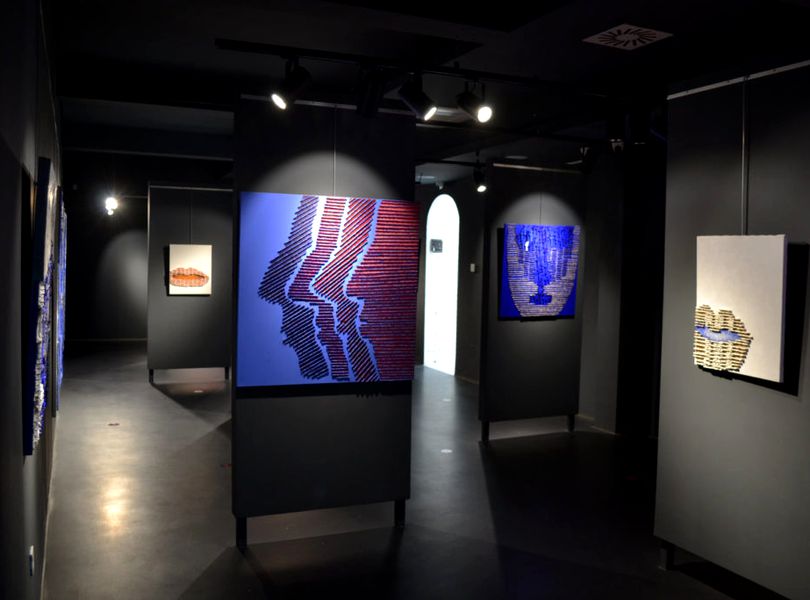 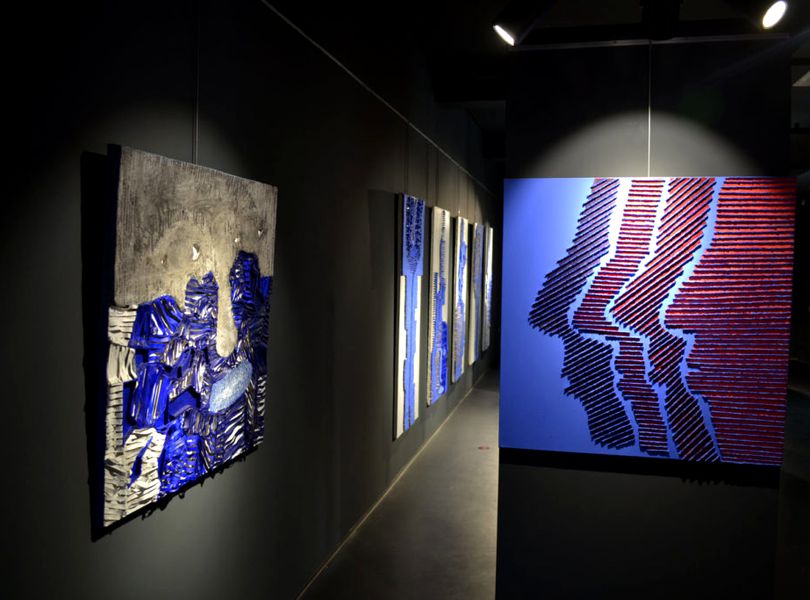 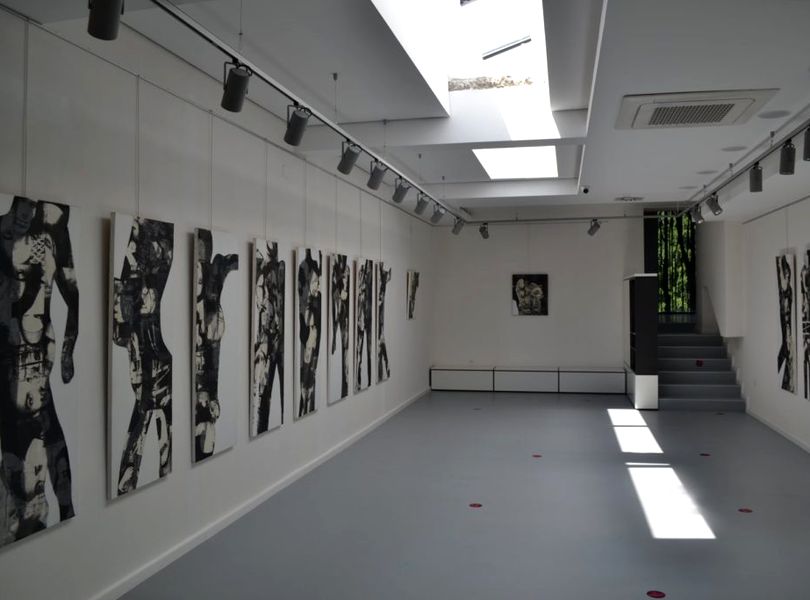 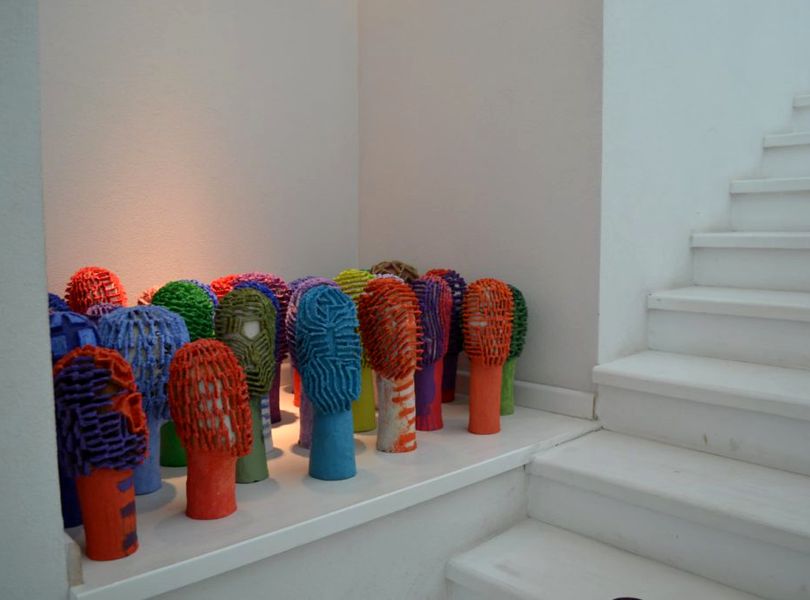 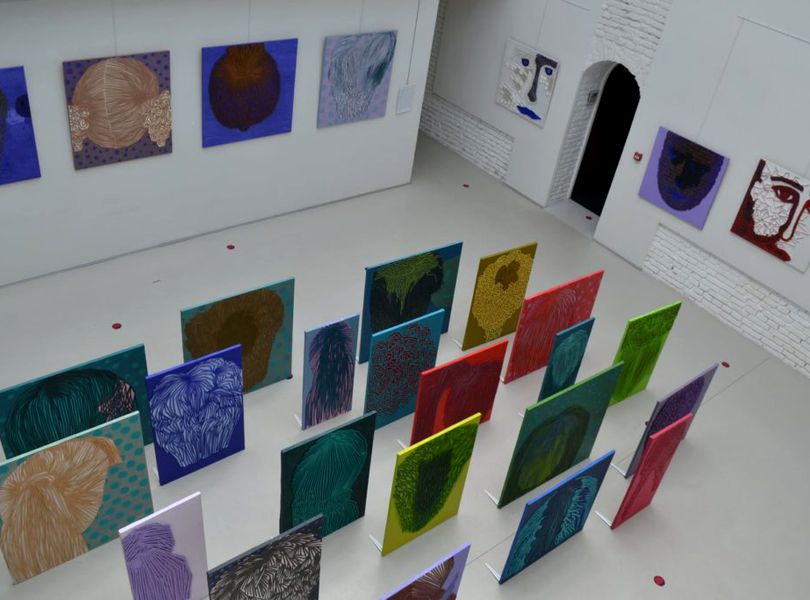 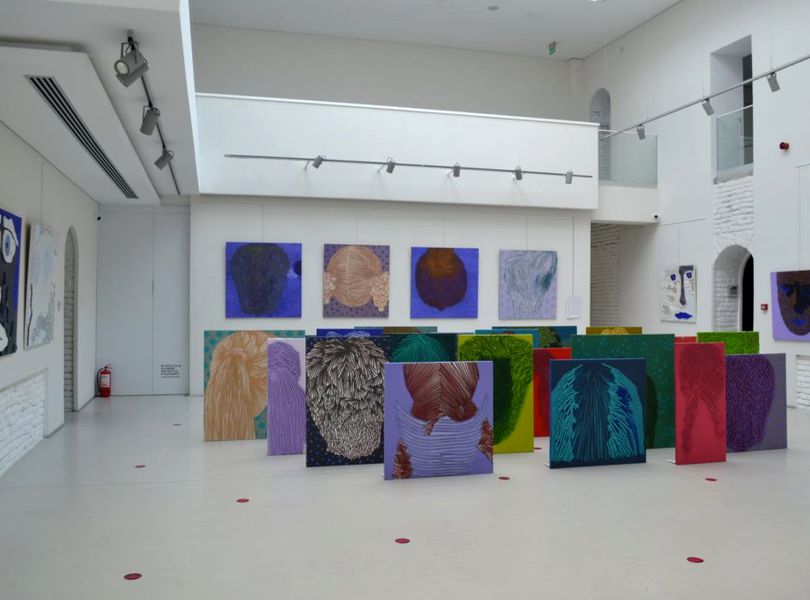 The album represents a dialogue between yourself and some of the art historians and curators. Why did you choose this format?

Because it’s something impermanent. My professional evolution during 20 years in which I tried to understand the dynamism of the world we live in, in an attempt to define it through professional concepts, through technical resolutions.

The album includes critical texts of some art critics and historians who know my professional evolution well, but also a dialogue with one of them, a dialogue in which I tried to answer some biographical curiosities related to childhood, life, and career.

How did you find the space of Colonia Pictorilor / The Painters’ Colony? How can it be described?

This is a slightly longer story. At a 2013 Symposium in Poland, I met Laura Ghinea, my colleague who is the President of the Union of Visual Artists Baia – Mare. The following year she invited me to a symposium in Baia – Mare and it so happened that during that symposium the rehabilitation and renovation project of the Painters’ Colony was launched.

We went to the opening event, where Laura and the architect Ioan Ştefan Paskuczc were present and they introduced the project, officials were there, the press, artists. Many of the artists were against the project. Attending the debate and seeing the lack of support, I decided to intervene, trying to emphasize the importance of the project by giving examples of other similar projects in the world, but also verbally sanctioning the conservative attitude of fellow artists.

Of course, in the following days the debates continued in the press, I continued to participate with the firm conviction that I must support that project. The project was finalized in the following years, but with not much support from local artists but with the belief of those involved to carry it out.

The Painters’ Colony is now a complex of creative spaces (workshops), a gallery, one of the most professional exhibition places in our country, and a large park is hosted in the area where the buildings are located.

The realization of the project is the merit of the perseverance of my colleague Laura Ghinea and of the team she collaborated with. I say this because for the last thirty years never before has such a large location been built to benefit the visual arts from our country.

In your opinion, what role does the artist have in society? What do you hope that others will gain from viewing your art and this exhibition in particular?

The artist’s role is to reflect with its own means, the world in which he lives, its problems, in an attempt to define that world, to leave behind him evidence about that world as it has always happened in history.

As we know, history itself has been reconstructed on the basis of the visual heritage that has been preserved over time.

What’s the most important element in this retrospective?

The exhibition present at the Painters’ Colony reflects the contemporary human transformed by the revolution of the appearance of the internet, by the magnitude and performance of the means of communication, by the refuge, almost totally, in the online environment. It is an interactive approach to some aspects of our current existence.

In contrast to the works in the online area, there are works that address issues that characterize the human being, problems related to memory or child purity.

Exposed in different spaces but making them communicate harmoniously with each other, the presented cycles suggest a balanced presentation of the contemporary human being, in spite of all the challenges to which he is subjected.

Taking into consideration these 20 years you are celebrating with this exhibition, can you describe one artwork or series from your oeuvre that you feel was pivotal in your career?

I could not mention a particular one because each of the stages is the witness of my thinking and feeling, which I cannot deny. It is very difficult to say that you like something, there is a high degree of relativity in this process. For example, I close a professional cycle when I feel that I have said everything about the issues addressed. Then I put the works aside and the reaction is not to see them for a while, but when I return to them, I perceive them differently, from all points of view.

Sometimes, looking at works from other stages, I have a strange feeling that they are not mine. Detachment from works creates the necessary distance in perceiving them as someone from the outside.

I could say, however, that the years in which I created certain periods are dearer to me, this is because those years were perhaps better.

Given that you live and work in Bucharest, but sell your art worldwide, how was this pandemic period for you as an artist?

The pandemic period was good because I worked all the time, there was nothing to take me away from my working time.

Although I am an artist who spends a lot of time in the studio, the idea of not being able to move was repressive, it restricted my freedom to move and I felt it as such. But I agreed with the situation, with the need to respect it.

As an artist, how do you perceive the local art market in the current pandemic context? How about the international art market?

The pandemic has affected to some extent all areas, especially the art market, we know that when there are crises, the art market suffers. But I think it stimulated the effort to find new solutions in the online environment, which has become the medium for art fairs, international art events.

The perpetual adaptation to the new challenges makes all the problems to be alleviated by finding new solutions.

The international market continues its struggles, it continued to exist but at oscillating parameters.

I think it was affected, the gallery owners continued to keep the exhibition spaces open, but in the conditions imposed by the pandemic, the public was reluctant and the market moved to the online environment in a very large proportion.

Are there any lessons that you’ve learned that you could pass on to the younger generation of artists as they begin their journeys?

I tell young people to be curious, to visit many museums, galleries, major international events and to try to digest everything they see. Not to approach with bias, to be daring, to experience knowledge that will help them in finding their own path, despite the fact that it involves a long road sprinkled with many trials.

At the same time, when they think they can knock on a “professional gate” and are rejected, not to be discouraged, always try until what they want to achieve is done. Nothing comes immediately and every failure means an extra experience. The acquired experience will guide their steps towards the deserved place in the hierarchy of values.

There are more and more talks in the public space about the importance of female artists. How has the art world’s relationship with women artists changed since you began your career? How could it still improve?

I think the woman has managed to demolish many of the centuries-old prejudices about her role in society. Of course, there are still geographical areas where religion brutally speaks for the role of women in society, but even in those areas, there is obvious emancipation in recent decades. As we well know both in Europe and especially in the United States, there is a strong feminist movement that has managed to eliminate any discriminatory issues.

As for me, I’ve always thought that what matters is the value and not the gender you belong to. My professional attitude was free of prejudices in this regard and I set out with such an approach.

What exciting projects are you working on right now? Can you share some of the future plans for your artworks?

I am currently working on a new cycle in which I try to capture the “places” that have meant to me, respectively, the places of childhood. Imaginary, I go back in time, I try to see (emotionally) those places that made me believe that there is something beyond the horizon.

I think that towards that indefinite thing I always chose an attempt to define myself as a human being, as an artist. It is a professional experience that makes me look forward in the mornings to get to the workshop and continue the search adventure.