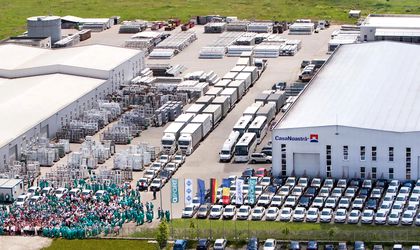 Casa Noastră, the manufacturer of QFort doors and windows and one of the largest manufacturers of insulating carpentry solutions in Central and Eastern Europe (CEE), is investing more than 20 million euros in a new factory near Craiova, Dolj county.

The new production facility is part of a larger investment plan to expand the aluminium profile business, with a total investment of over EUR 20 million. For this project, Casa Noastră has applied for a state aid for investments, regulated by GD 807/2014, of over 9 million euros, successfully managed by the REI team, a group of companies specialized in attracting non-reimbursable financing, among top 3 largest consulting companies in Romania.

The financing agreement for the state aid was obtained by Casa Noastră – QFort at the beginning of 2020, and over the last two years investments have been made in the development of the hall and the purchase of equipment, with the factory due to start full operation next year, after only partial production this year.

Located in Pielești, Dolj county, 6 km away from Craiova, the new production unit, specialising in the manufacture of aluminium carpentry, will generate over 200 new jobs.

“We are pleased to have been able to make this investment and achieve our goal of delivering a complementary product range to the market through the production of aluminium profiles locally, for which we have seen a growing demand in recent years. The investment, which was also made with the contribution of a state aid of about 45% of the total value of the project, will help us to better position our product offer both locally and for export, where we are present with an important part of our production, in markets such as Italy, France, Austria, Germany, Switzerland, the Netherlands, Belgium and Spain“, said Ștefan Cherciu, owner of Casa Noastră – QFort.

According to data provided to REI by Neomar Consulting, a company specialising in the preparation of expert studies on the building materials sector, the market for insulating carpentry reached more than 900 million euros in 2021 and is on a continuous upward trend, with 80% of sales representing PVC profiles and 20% – aluminium carpentry.

REI, a group of companies specialized in consultancy services for attracting non-reimbursable financing, with over 1,000 successfully intermediated projects, a team of over 80 specialists in 13 offices nationwide, has submitted, in recent years, projects totaling over 200 million euros, investments through the financing scheme regulated by GD 807/2014.

“Companies in the building materials manufacturing sector have been among the most active in investing in recent years, especially those in the field of thermal insulation carpentry, with a very high appetite for new developments. The carpentry market has seen growth well above the level of the construction market, due to growing consumption, new construction and renovations, where more and more companies have turned to grant support for investment projects. QFort’s investment project is another example that development plans bring results over time and state aid can be a winning alternative to these projects“, said Roxana Mircea, managing partner of REI Grup.

Out of this amount of more than 200 million euros invested through state aid in the REI portfolio, about 30% was accounted by projects of companies specialising in the production of insulating doors and windows.

State aid scheme regulated by GD 959/2022, the only support measure with an investment component currently available to companies: available budget is over EUR 300 million

The state aid scheme regulated by GD 959/2022 is the only non-reimbursable support financing measure for investments, which is addressed to start-ups, micro-enterprises, SMEs, but also to large companies, whether entrepreneurial or multinational. The funding round is now open, projects can be submitted on a rolling basis and projects can be submitted until December 16, 2022 at the latest.

With a multiannual budget of EUR 300 million for 2022 and 2023, the scheme is aimed in particular at supporting the manufacturing (production) and construction industries and provides up to 80% grant support for investments of at least EUR 3 million. The call opened on 1 November and will remain open until 16 December.

“The business community has been waiting with great interest for the launch of this new funding scheme. We have more than 20 projects in the pipeline on this new funding measure. Companies are requesting support for the construction of warehouses and the purchase of equipment, and the total value of the projects exceeds EUR 300 million“, added Roxana Mircea.

No less than 19 Romanian counties are benefiting from this year from non-reimbursable support of up to 60%, even 80% in the case of small businesses, through projects carried out with state aid, according to a REI analysis.

Thus, Botoșani, Suceava, Neamț, Bacău, Vaslui, Vrancea, Galați, Tulcea, Brăila, Buzău, Prahova, Ialomița, Călărași, Teleorman, Olt, Vâlcea, Gorj, Dolj and Mehedinți are the 19 counties that benefit from allocations of up to 60% in projects carried out through state aid as of this year, while the rest of the country’s counties have allocations of between 30 and 50%.