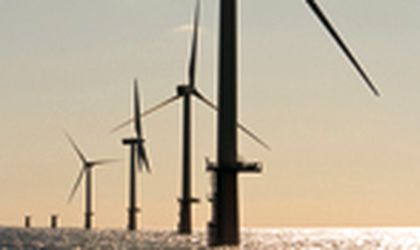 The American giant General Electric is betting on renewable energy. The company has spotted the great business opportunities which come with the dozens of wind power plants set to be developed in Romania and neighboring countries in the next few years. According to Rod Christie, CEO for CEE, Russia & CSI at GE Energy, the American company considers it “vital” to have a wind turbine manufacturer in the region in the near future. “We've looked at different country options which include Romania, Bulgaria and Poland, but a final decision will probably be taken in the next two years,” Christie told Business Review.
He added: “For energy this is the fastest growing region of all the ones where GE Energy has operations, a region where we've reported double digit growth in the past three or four years, meaning 30 up to 40 percent.”
The company official says that the evaluation for the production unit location is not yet finished because other countries in the region are still presenting their conditions for such an investment. “GE will make a final decision taking into account each country's announced advantages. It will most probably be a country that is already part of the European Union structures with a tradition in the technical industry sector, which can cover GE needs regarding suppliers,” said Cristian Colteanu, regional executive for Romania, Bulgaria and the Republic of Moldova.
One argument that will weigh heavily in the final decision is the number of suppliers that GE Energy will reach. Presently, it has nine Romanian supplier companies, such as General Turbo and Popeci, which have GE contracts of some EUR 30 million per year.
“We need suppliers for metal forging, fabrications and high quality machining. We have already identified such suppliers but they have to go through a qualification period and we have to see whether they have the requested capacities, can make the necessary investments, want to work with us and are able to provide the technology transfer,” added Christie.

Market has breezy outlook
For wind power plants Romania has set a target of 2,000 MW by 2010. After this year, according to some estimates, the country's technical potential could reach 4,500 to 5,000 MW. GE Energy wishes to be a significant player on this market.
“GE Energy is interested in projects of more that 50 MW, meaning no fewer than 20 wind turbines, and we are paying attention to all running developments. At the moment we have just one agreement signed with Continental Wind Partners (CWP) – Good Energies for a 200 MW project in the Dobrogea region,” said Carmen Neagu, country executive for Romania, Bulgaria and the Republic of Moldova at GE Energy.
According to her, this partner has four sites, of which just two have already had wind tests and measurements taken, in the past two years.
“We are watching every wind farm project announced on the local market very closely. There are several in the negotiation phase, with the details regarding accessibility to the national system and permits to be finalized. We hope to announce such a project shortly,” added Neagu.
GE Energy production for next year is already reserved. Any discussion with new clients has to cover deliveries from 2010. The total investment for 1 MW of wind energy can surpass EUR 1 million.
“The investment in equipment and the actual building for such a project reaches around 50 percent. Discussions involve locations for such wind farms in less and less accessible areas, which leads to higher transportation costs and a higher total investment,” said Neagu.
In terms of financial results, last year in the region, which includes Romania, Bulgaria and the Republic of Moldova, GE made an investment of USD 500 million and sales of USD 400 million, representing an increase of 200 percent compared with 2006 results.
Of this sum, 80 percent came from investments and sales made in Romania, 19 percent Bulgaria and 1 percent from Moldova, where energy programs have only recently been launched.
“For wind farm projects, Bulgaria has a similar development pace to our country. But, private sector decisions are made more rapidly in Bulgaria than in Romania,” said Colteanu.

Wind of change blows through energy sector
A combined-cycle power plant in Brazi for oil and gas producer Petrom will be the first appliance of GE Energy's 9FB gas turbine in Romania. The Brazi project is Romania's largest investment in the power generation sector since the Cernavoda Unit 2 nuclear project, which began in 1989. “This plant will help us achieve our goal to produce approximately eight to nine percent of the country's electricity by 2012,” said Gerald Kappes, a member of Petrom's executive board.
The new plant will produce some 860 MW, of which 20 percent would be used by Petrom for its own operations, with the remainder sold on the Romanian power grid. Construction is planned to start at the beginning of next year and the plant is expected to begin supplying to the national power network in the second half of 2011.
With a thermal efficiency of more than 57 percent, the facility is intended to be among the most efficient in Eastern Europe. “This level of energy efficiency is attainable with high performance technologies. This means one cubic meter of fuel gives 0.57 MW (57 percent), while with current technologies the same amount of fuel gives 0.33 MW (0.33 percent),” said Neagu.
Gas turbines sales, she says, are not as predictable as wind turbines. “It is difficult to predict exact sales figures for the gas turbines, as
the mixed cycles of more than 800 MW demand will depend on the strategic analysis regarding the national energy system. There are several analyses for such projects for the 9FB technology, but the studies are not completed,” said Neagu.
GE Energy officials foresee a radical change in energy sources. While two decades ago the world relied on coal and after that oil, now the focus will switch to wind and solar energy. Christie predicts that “In the next five years, the cost of solar energy will be reduced substantially and we will play a role in a significant change regarding commercially viable solar technologies.”