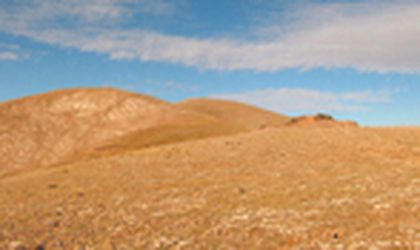 “It is impressive to see a trench indicating a high degree of gold,” said Stacy Quinney, senior vice-president of Valhalla Resources. “Up until now we have two properties that are licensed by the Romanian National Agency for Mineral Resources (ANRM) that we are exploring, at Bratosin Hill and Corbesti-Micanesti. More precisely, we are drilling to see how much mineral is in the ground. We will probably have a picture of what is there by the fall of this year,” Hayes says. It will take a couple of years until the mine is actually built. “If we are lucky it will probably take at least three years to prove the reserves, design the mine and receive all the approvals,” he added.

The IPO
The company's plans need to be supported with solid investments, so Valhalla is looking at raising the necessary funding through an IPO. “Because the results are promising we are going to list the company on the Toronto Stock Exchange (TSX) in the late summer or early fall this year. We estimate the IPO will raise between CAD 3 and 5 million. The money will be invested both in the existing locations and in new ones,” said Hayes. According to him, the company will be submitting requests for new exploration licenses to the ANRM in a month or two and another one in the summer.
“We would like to eventually have at least five or six exploration licenses in Romania,” he says.
Up until now, Valhalla Resources has invested only money from the founders, meaning Hayes, Quinney, Dan Onescu, a Romanian geophysicist and owner of Belevion s.r.l. (an exploration services company to which Valhalla Resources subcontracts the exploration services), and Martin Oczlon, a German geologist,with extensive experience exploring for minerals in Romania.
“Besides the capital that the company founders contributed, we have raised CAD 3.9 million from private investors, primarily from Germany and Switzerland, to finance our projects in Romania,” said Hayes.
“We have also considered the alternatives for when we reach the next phase. So, assuming that we have proven a viable reserve, we would probably go for a joint venture with a global mining company, one of the so called ‘majors.' We will evaluate all of the alternatives on a case-by-case basis regarding each of our properties. We will have talks regarding such a partnership early next month, but we cannot disclose the name of the company,” said Quinney. It will be several years before the founders will recover their investments.
“The exploration business is very atypical compared to a lot of other businesses simply because the first years are all money out and no revenues, very much red ink on the financial statements,” said Hayes.
The development plans of the company do not stop at Romania's borders. “We are also involved in one exploration project in Turkey. We have a joint venture with
Anatolia Minerals, also listed on the TSX. We are looking for an
additional project there,” said Quinney.

The Rosia Montana effect
The plans look good on paper but there is one more problem: Rosia Montana, an issue which has put off many exploration companies that were interested in investing in Romania.
“We are watching the situation very closely. I believe that Gabriel Resources will eventually get their permits because it is a very significant deposit and the Romanian government owns 20 percent of that property and wants to see employment and production in the mining sector. Once the approval is granted, the international community is going to be much more interested in the mining sector in Romania,” said Hayes.
According to him, the decision will be influenced by what happens at the political level.
“The official opinion is that authorities are evaluating the environmental impact report. People that I have talked to privately have all said: ‘look, we want to get this done, we need to see employment in the mining sector.' The attitude is positive but those in political positions have a responsibility to strike a delicate a balance between moving foreword and protecting the country,” said Hayes.
In his opinion, big companies specialized in mining can invest their time and money anywhere in the world. Currently most of them are looking at Romania from a distance, but would rather go to countries that are perceived as being more “mining friendly,” including Bulgaria, Peru, Brazil, Canada and the US. Until the problems of Gabriel Resources are resolved their corporate decision is very simple: wait and see.