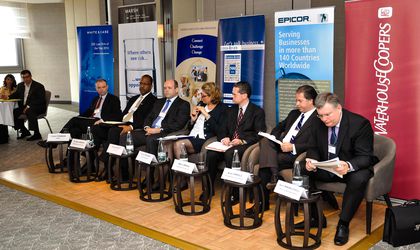 A tax increase in itself is not necessarily a deal breaker for foreign companies considering the Romanian market, but the lack of predictability and transparency weighs heavily when taking up the option to start a business here.

Company representatives attending the second edition of the American Business Forum organized by Business Review last week labeled the government’s decision to raise VAT to 24 percent a very unfortunate measure for the local business environment. And while the move was foreseen and somewhat expected by many businesspeople, the short period between the announcement and the implementation turned out to be a real challenge for local companies. It was recommended that the government should offset some of the negative effects of the VAT hike by implementing additional measures in order to stimulate growth and encourage investments.

The local fiscal system is an attractive one at first sight with fiscal rates still maintaining a reasonable level. However a second glance reveals several issues which have been constantly flagged up by foreign investors. Tax deduction continues to be complicated in Romania and companies often report cases of aggressive and overzealous tax inspectors. Doing business with public authorities remains problematic as long as the government doesn’t simplify the current public private partnerships (PPP) law.

All local industries have the potential to attract American investments in the future, in the attendees’ opinion, but this largely depends on the authorities’ capacity to create a competitive market.

The American Business Forum also featured the presentation of the Year of Romania event organized by Kennesaw State University in Atlanta, Georgia.

The event, which attracted about 90 company officials, was sponsored by Accenture, Asebuss, Marsh, Epicor, PricewaterhouseCoopers and White & Case. More information can be found at www.business-review.ro.