The payment gateway is launched in WELTHEE, the innovative investment platform on volatile markets 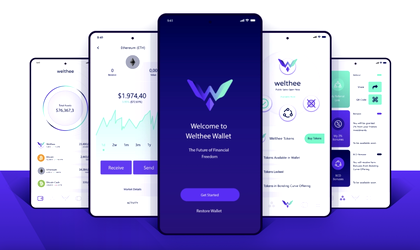 With the launch of the payment gateway in Welthee, the innovative investment platform in volatile markets, anyone can have access to calculated risk investment opportunities. In the application launchpad, the selected startups in the pre-sale stage are already available. These include TOKHIT, the first blockchain-based social network, or Superkoin.

About 5,000 people around the world downloaded the Welthee application in the first 2 months after its launch, three times more than the initial estimates, which demonstrates the extraordinary interest and also confirms the vision of businessman Cristian Voaideș, the founder of Welthee, on financial independence, digitization and decentralization. These investors, from all continents, also participated in the pre-sale round, enjoying the financial opportunities that the product brings. The round will end soon, but by then the cryptocurrency has a one-time cost of $ 0.06, and it will increase to $ 0.1.

Welthee, the Beta version, was launched in 2021, combining a futuristic idea about calculating investment risk and the possibilities brought by web 3.0. The Welthee currency and the digital wallet that the application offers, allowing inter-currency exchange and instant payment, will revolutionize the way each person, experienced investor or at the beginning of the road, will own and deposit money.

“We are at the beginning of a new financial era and Welthee is the ‘train’ to this future. The platform was enthusiastically received in Europe, but also in the rest of the world, and we are delighted with the enthusiasm with which we were greeted in Dubai. We aim to offer financial freedom and full control over the finances of all those who understand and want to enjoy the benefits of decentralized infrastructure, “said Cristian Voaideș, founder of Welthee.

At the end of September, between 20-23 of the month, Cristian Voaideș announced the launch on the Dubai market of WEENVEST, a Real Estate Investment Fund based on the investment technology Welthee> The Future of Financial Freedom < which comes to decentralize real estate investments as we all know them. The launch will take place in December. Its presentation and the announcement have been made during an exclusive event held with Andrei Ureche, founder of TOKHIT, the blockchain-based social network, available through Welthee Launchpad. It was a gala held in the company of dozens of investors, businessmen, celebrities and influencers around the world. The hashtag #welthee has so far garnered 3.5 million views through the content created by those present.

The two revolutionary projects have attracted the attention of investors from Dubai, Saudi Arabia, India, Africa and the USA, so Cristian Voaideș and Andrei Ureche are confident that they can conquer the business market, through the innovative ideas on which the applications are based. If Welthee is a platform dedicated to investments using cryptocurrencies, TOKHIT covers the area of ​​creative industries, being the first social network dedicated to artists and professionals in various fields, with the component of NFT and Blockchain.

Fabulous start for TOKHIT and Welthee, startups with disruptive visions based on blockchain!...