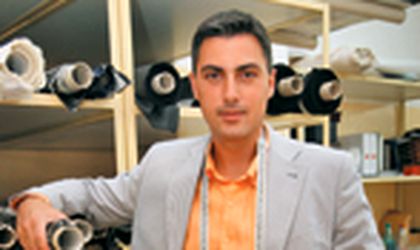 Starting up a business like an atelier, especially a suit tailoring one, is not an easy task. Leaving aside the money, establishing a studio, creating a name and doing the right stuff involves suffering the common problem faced in many industries at this time. “The main problem is finding the right people who know the job,” says Alexandru Ciucu, the owner of the atelier of the same name. While in other industries, people can be quickly trained, and there are jobs when in a couple of weeks you can learn how to speak on the phone or dig a hole in the ground, tailoring requires experience. And the creativity requires even more than this: talent and a bunch of years behind. “You cannot find people to be trained from one day to another and there are few people on the market who have experience of five to ten years,” says Ciucu.
He remembers that five or so years ago, Romania's GIP was represented 30 percent by tailoring and the leather manufacturing and goods industry. Now, when the fashion and industrially-made clothes industry is flourishing, and many factories have established operations in Romania, real artists and real tailors to sew a suit from a vision and design it from the start to the last needle sting, are hard to find. Many leave Romania.
A suit, he says, requires 200 different operations. On a production line, a regular worker performs 5 to 10. But a creative atelier like Alexandru Ciucu's needs artists and the special few who know the job. He smiles, saying that the artistic gift is the milestone in an atelier which doesn't provide creativity just for designing suites, but also for patterns.
Ciucu's atelier was set up in 2006. Ciucu said that at first, he invested EUR 100,000 in the interior design of his atelier and the acquisition of the first fabrics. This sum does not include the machines, recruitment costs or the purchase of the operational spaces, since these already existed within the Samric factory. Ciucu comes from a family with a tradition in tailoring: his grandmother and father worked at the Apaca textile centralized factories, mostly known as an exclusive branch industry of the communist years. “As a child, I remember this crowded place filled with 25,000 textile workers. Now, you barely find 2,000.”
After the revolution, Apaca started to get privatized, wing by wing and section by section, and Ciucu senior started the business of Tata & Fiul together with his son. The suit chain now consists of five shops, three in Bucharest and one each in in Brasov and Iasi. Father and son are also partners in the three Samric factory shops, the factory within Apaca.
Ciucu junior looks at the business from three perspectives. “Samric addresses the average to low price segment, Tata & Fiul the medium, while Alexandru Ciucu Atelier looks to the premium slice of the market. We lack the high end segment, where the strapping battle is running but we will get there,” says Ciucu.
He was about 24 when he got involved in Samric and Tata & Fiul, but he wanted more. After six years creating and developing Tata & Fiul, he opened his own atelier. Ending the first operational year in August 2007, Ciucu said that the first turnover was EUR 100,000. For this year, he hopes to reach EUR 250,000. “We are pioneering this business, it is a niche where we struggle to make a market,” says Ciucu.
He knows two more such equivalent businesses in Bucharest and within such a petite market everybody know everyone enough to avoid intersecting the businesses and creating problems for each other. He doesn't count the small “convenience” tailoring shops, the remains of the communist years and which now find a market for low-price tailoring, sewing or repairing shoes. Ciucu describes his business, which hires 25 tailors or artists as he likes to call them, “the most complex bespoke suit-making atelier”. “In a workshop for ladies' clothes, there are around five workers, for instance,” he compares.
The typical customer for Alexandru Ciucu atelier is not necessarily high net worth. “Some of them are very rich indeed, but we serve customers on average budgets as well,” Ciucu says. The difference comes from the social understanding of choosing a suit when it comes to a key moment. For instance, a man would choose to have a new suit made when something important occurs in his life, a wedding or a promotion. And for such events, everyone seems prepared to dig deep in their pockets. A classic ceremony suit, involving the complete outfit, costs from EUR 1,200-EUR 1,300 at the atelier. The price depends on the textile chosen, Ciucu explains. For a business suit, prices would range from EUR 800 to EUR 1,000, or reduced to EUR 600 if the customer bought in bulk.
In the first operational year, Ciucu invested around EUR 30,000 in buying the fabrics from Italy, the sole market where he sources supplies, and for this year, he expects to exceed EUR 70,000. Depending on demand, the atelier renews supplies every one or two months.
Such a business is also very much related to seasons and business schedules. For instance, Ciucu registered the highest demand – 100 – in one month this year owing to more weddings. Since July and August see little business, social events balance the lack of demand.
For now, Ciucu is reinvesting all the money in advertising the workshop and brand, being present everywhere, running a media campaign, and increasing its presence at exhibitions and fairs. Most of the advertising comes from the personal relations with customers. The human touch is key.
He doesn't make a profit right now but says, “I hope to get really happy within two years”. But he doesn't expect the market to have a lot of competition. Ciucu doesn't fear competitors, because, the common effort of creating the market for bespoke suites would help everyone, including himself.