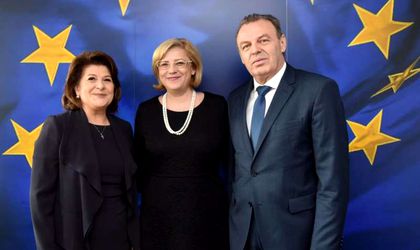 Transport minister Lucian Sova and EU Funds minister Rovana Plumb met on Thursday with Corina Cretu, the European commissioner for Regional Policy, and discussed the European Commission’s financing of the M6 subway line in Bucharest that would link the city to the Henri Coanda International Airport in Otopeni.

“Discussions were constructive and both parties agreed to follow the high standard implementation of the project. The European Commission will soon send a response to Bucharest authorities on the clarifications presented by the Romanian side,” according to EC representatives.

In March, the EC had requested clarifications from Metrorex regarding the financing request for the M6 subway line. Yesterday’s talks provided details about the route options, the value of the project compared to other similar projects in Bucharest, the impact on traffic during constructions, the impact on the building of the second Otopeni terminal, and the implementation calendar.

The talks also touched upon a possible rapid traffic link between Transylvania and Moldova. The aim is for the preparing studies for the implementation of this link to be done in the current financing period, and the route will be established so as to bring economic benefits for both Romania and the EU.