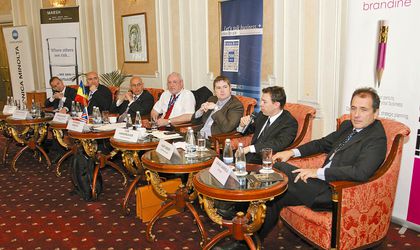 Romania is experiencing the impact of the economic crisis alongside all the other European economies but some of the country’s specific and unfortunately deep-rooted problems seem to be slowing down its recovery process. Representatives of the British business community in Romania agreed that although companies are facing hard times, there are lessons to be learned and changes to be made which in the long run will have a positive impact on the economy.

Cash flow has become the name of the game and companies have been forced to become more efficient and rethink their strategies. Many of the businesspeople present at the event argued that the crisis is a test of maturity for the local economy that will bring a sense of normality both for the private and public sector.

A good example cited was real estate and construction. Whereas before the crisis buildings of any sort were built fast and sold even faster for ever increasing prices that didn’t reflect the building’s value, now the situation has changed dramatically. With the credit freeze and companies and consumers readjusting their costs, there has appeared the demand for energy-efficient buildings which are rather scarce on the market.

Many of the country’s competitive advantages such as a skilled workforce and the size of the internal market are still there, but will not be enough to attract future investments if taxes increase and the local authorities don’t address the economy’s existing issues.

The event, which gathered about 90 company officials, was organized with the support of the British Romanian Chamber of Commerce (BRCC) and sponsored by Schneider Electric, Horvath & Partners and Marsh. More information can be found at www.business-review.ro.