BlaBlaCar takes path to profitability, with 75 percent of revenue coming from foreign markets 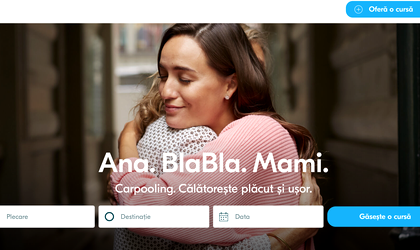 French ride-sharing startup BlaBlaCar, whose services are popular with Romanian users, has reached profitability, figures on the revenue between January 2018 and today show.

According to the the company, whose most recent valuation stands at USD 85 million, 50 million people will book a ride using its marketplace for long-distance rides in 2018, representing a 40 percent year-on-year increase.

The ride-sharing platform currently has 65 million registered users. In France, its local market, the figure stands at 15 million. Out of those the biggest segment of users are aged between 18 and 35. As the company is reaching saturation on this particular segment, TechCrunch writes, the next growth opportunity comes from the elderly people segment, which is the fastest growing segment.

BlaBlaCar is present on 22 markets, and 75 percent of its revenues come from foreign markets. In Romania, 8 percent of those who use ride-sharing services use BlaBlaCar.

A total of 8 out of 10 Romanians have heard of at least one ride-sharing service, according to a study by iSense Solutions, carried out online. Almost half of Romanians (47 percent) who have heard of car sharing in the cities where these types of services are available have also used them. The study shows that 40 percent of respondents have used Uber, 10 percent have used Taxify, 8 percent have used BlaBlaCar and 3 percent Black Cab.