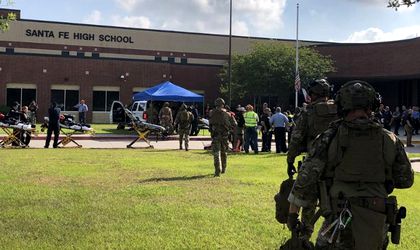 The 17-year-old student charged with killing 10 people when he opened fire in an art class at his Houston-area high school appeared “weirdly nonemotional” on the morning after the rampage, one of his lawyers said on Saturday, according to Reuters.

The teenager, identified by law enforcement as Dimitrios Pagourtzis, has been charged with capital murder and is being held without bail in Santa Fe, Texas, where authorities said he went on a shooting spree shortly before 8 a.m. CDT on Friday.

Nicholas Poehl, one of two lawyers hired by the suspect’s parents to represent him, told Reuters he had spent a total of one hour with Pagourtzis on Friday night and Saturday morning.

While authorities have given no indication why he apparently targeted the art class, a mother of one of the victims told the Los Angeles Times that her daughter, Shana Fisher, 16, had rejected four months of aggressive advances from Pagourtzis.

Fisher finally stood up to him and embarrassed him in class, the newspaper quoted her mother Sadie Rodriguez as writing in a private message to the Times.

“A week later he opens fire on everyone he didn’t like,” she said. “Shana being the first one.”

Rodriguez did not say how she knew her daughter was the first victim, according to the newspaper.

Pagourtzis’ family said in a statement they were “saddened and dismayed” by the shooting and “as shocked as anyone else” by the events. They said they are cooperating with authorities.

“While we remain mostly in the dark about the specifics of (Friday’s) tragedy, what we have learned from media reports seems incompatible with the boy we love,” the family said.

Investigators had seen a photo of a T-shirt that read “Born to Kill” on the suspect’s Facebook page and authorities were examining his journal, Texas Governor Greg Abbott told reporters, but there were no outward signs he had been planning an attack.

Pagourtzis waived his right to remain silent and made a statement to authorities admitting to the shooting, according to an affidavit ahead of his arrest.

Asked if Pagourtzis had provided authorities with information about the shootings, Poehl said: “Honestly because of his emotional state, I don’t have a lot on that.”