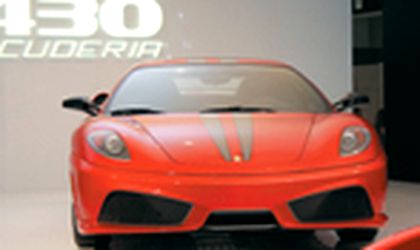 In the last couple of years, hundreds of thousands of cars have joined Romania's roads, as the market sky-rocketed. But the new car tax that was introduced put a brake on new car sales and opened the door to the second-hand car market, which has reported a consistent increase. Surprisingly, however, the luxury car segment has continued to increase, with Romania's top earners the target market.
For instance, the most expensive car sold on the local market in the first half of this year was a Mercedes-Benz CL 65 AMG, at EUR 290,000, according to information from the importer. With state-of-the-art machinery, equipped with a powerful engine of 6,000 cubic meters and V12 cylinders, the German car can easily reach 250 km per hour.
In second place a Ferrari 430 Scuderia went for EUR 260,000 and third came a Mercedes-Benz SL 63 AMG with a price tag of EUR 243,000. Audi A8, Porsche 911Turbo Cabriolet, Maserati Quattroporte Collezione, BMW Series 7 and BMW M6 models have also been driven off showroom forecourts, leaving their new owners between EUR 200,000 and EUR 140,000 worse off.
Market specialists think that the luxury car market will continue to grow. “The luxury car market is increasing moderately at around 10 percent, but at a higher rate than the general trend of the local car market. It is premature to talk at this point of reaching saturation point,” George Sanduleac, brand manager of Porsche, told Business Review.
Mercedes-Benz representatives also have high expectations. “On the luxury car segment, new car sales are up by 10 percent. The car segment in our portfolio which is in direct competition with other brands has seen an increase in the first eight months of 20 percent,” said Valeriu Zaharia, sales & marketing manager at Mercedes-Benz Cars.

Targets for exclusivity
The Romanian importer of Ferrari, Forza Rossa, has set for this year a sales target of 10 to 15 units. “In Romania there are 60 Ferraris in circulation to which will be added up to 15 cars, the number of units that Ferrari has set for the local market,” said Roxana Valcu, communication manager at Forza Rossa, at the company grand opening.
Meanwhile, competitor Porsche Romania said it aims to sell 35 cars from the new 911 series this year, which would be 22 units more than last year.
“This year we sold 140 Porsches, of which 40 were sports models like the 911, Cayman and Boxster and the rest SUV Cayennes. The Cayenne contributes two thirds of the total annual sales volume for the brand,” said Sanduleac.
However, the future is more difficult to predict. “The factors which could influence the car market next year, such as market evolution, macroeconomic parameters and new laws are not clear yet,” he added.
Regarding expansion plans Sanduleac said: “Currently, we have a Porsche showroom and a service unit in Bucharest, but in the future we plan to expand to other parts of the country as well.”
Mercedes-Benz Romania officials estimate for this year a sales increase of 30 percent, to 4,000 units. By the end of the year, the firm says it will launch the Mercedes GLK, the latest SUV from Mercedes-Benz.
Zaharia said that the car division of Mercedes-Benz expects to end this year with a turnover of EUR 155 million, which represents 31 percent of the total turnover, and has solid expansion plans.
“Compared with last year when we had 13 dealers, this year we plan to end with a total network of 21 authorized centers in the country, including the large Mercedes-Benz sales and service center in Baia Mare. Next year's expansion plans are similar to this year's,” said the sales & marketing manager.

Newcomers take the stage
In February 2009, the AutoItalia Group will start marketing the Japanese car brand Infiniti in a new showroom. “The contract with the Japanese was signed and the local operations will begin in the second month of next year. The new showroom will be developed north of Bucharest,” said Cristi Milea, the dealers network manager at AutoItalia.
Meanwhile, the British carmaker of hand-built luxury sports cars, Bentley Motors, will open its latest dealership in Romania's capital city. Owner Porsche Romania, will run the dealership, which will have a surface area of 368 sqm for the brand. It is anticipated that the facility will open for business in the second quarter of 2009.
The Bentley dealership will be a part of a larger showroom which will also include brands such as Lamborghini, Porsche and Audi. The total investment in this facility is estimated to reach EUR 15 million. “For the Porsche showroom of 533 sqm, where 14 cars will be on display, and the 784-sqm service unit, the estimated value of the investment reaches EUR 6 million,” said the Porsche brand manager.
The investments from these car market players come after Forza Rossa, the Romanian market distributor of luxury sport cars Ferrari, opened the company's new showroom, an investment of EUR 5 million, in the Otopeni area.