Local businessmen tip wind energy to whip up a profit 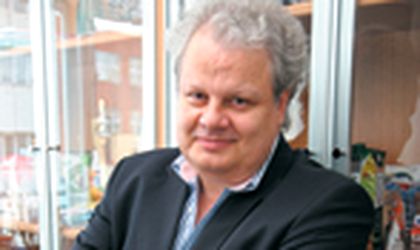 One of the names most recently entered on the list of local business people interested in wind farm projects is that of local businessman Dorinel Umbrarescu, the owner of Spedition UMB. The construction company he owns is known to have signed several contracts with the state for the construction of national roads, much commented on by the media.
Umbrarescu has made some progress in this new project. He asked Electrica for the permits to install wind turbines in Corbita, Vrancea County. Here he has leased some 3,000 hectares and in the next weeks his company Energycum W will start operations here.
“I intend to become an energy producer. It is three years since I started this project. I will finance it with a bank loan. The papers and authorizations are almost finalized,” said Umbrarescu.
He added: “I am in talks with several companies for the import of the wind turbines. The first turbine will be delivered by a Dutch company in the following two or three weeks.”
Although the businessman declined to offer specific details about the estimated capacity of the wind farm, Emil Tacu, mayor of Corbita, said that taking into consideration the amount of land leased by Umbrarescu the wind power plant could be formed of 25 turbines.

Tulcea, a new target for wind farm developers
Gheorghe Tripon, a local businessman from Cluj, is involved through Green Energy Group in three wind power plant projects, two situated in Tulcea and one in Constanta. “We currently have three turbines in production and we are in the middle of the installation process of another six. These will all be second hand, but the next turbines will be new ones. We cannot give exact terms and data on the delivery because this depends
on the negotiations with producers which have orders for the
next three or four years,” said Tripon.
The investment in the wind farm, which will have an installed capacity of 70MW in some 30 turbines, is estimated to reach EUR 100 million.
“We have the funds assured just for the first phase of the project,” added Tripon.
Tulcea is also targeted by EnergoBit, a Cluj company planning to build a wind farm. The investment budget for this project is EUR 50 million. The company has leased 67 hectares of land in Tulcea for the next 47 years. Company officials expect to recover the investment in the next 8 to 12 years. “We estimate that after we complete this investment company turnover could rise by 30 percent,” said Stefan Gadola, vice-president of EnergoBit.
The works are planned to start next year and are expected to be completed in 2011.
The company is considering developing wind farms in other regions throughout the country as well, and is analyzing locations such as Cluj and Satu-Mare.
Grivco and ButanGas turn to wind energy
Numbers seven and ten in the top 300 richest Romanians, the Voiculescu and Dragan families, are also confident in the profitability of the wind energy business and plan to invest millions of euros.
The energy trader, Grivco, part of the business portfolio of Dan Voiculescu, has set as its target to start the production of renewable energy by 2010. The company has already acquired land in Dobrogea for a wind farm of some 50 MW. “We have bought the fields for the future wind power plant. The investment will be several hundreds of thousands of euros,” said Ion Bebi, responsible for wind energy at Grivco.
According to him, the energy trader is now in the process of obtaining the authorizations and turbine acquisition. Grivco has a EUR 75 million budget to start the wind farm project.
Similar plans are also on the table at ButanGas, which is controlled by the Dragan family. Company officials have announced their plan to invest for starters EUR 15 million to develop a wind farm. “We are interested in wind power plants and we have already established two locations for this project. Most probably, at the beginning, we will develop a wind farm of some 12 MW to 15 MW. The energy will be delivered into the national transportation system and sold,” said Florin Preda, GM of ButanGas. He added that the company has not yet decided if the wind farm will be managed by ButanGas or by a new, specialized company within the group.

Milking renewable energy
After recently signing off on the sale of LaDorna Lactate with French group Lactalis, Jean Valvis, a businessman with Swiss and Greek citizenship, is looking ahead towards entering the renewable energy business. Businessman Valvis, president of the LaDorna Group, who brought the brand on the local market, plans to invest several million euros in wind and solar farms in Romania.
“The renewable energy project is in the analysis stage. I think this is a segment where we can run a healthy business. I don't count biodiesel in this, because I think there will be a huge conflict regarding this fuel, due to the general crises of raw materials in the food industry and the limited agricultural land,” Valvis told Business Review.
According to him, the investments in such energy-producing units will result from a partnership with a foreign strategic operator. “We will start to work on this project in two months' time,” said Valvis.
LaDorna registered a EUR 40 million turnover in 2007. It runs eight production units in Romania, while the French group posted a EUR 9.6 billion turnover in European markets such as Serbia, Moldova, Ukraine and Greece.
By Dana Ciuraru