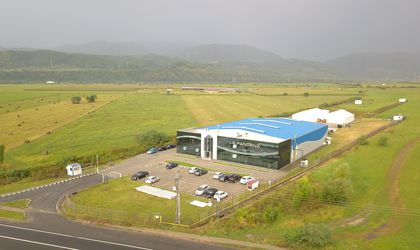 The company announces a major technology upgrade at its water bottling plant in Sibiu County, shortly after it recently opened production in the new factory at Şeştina, (Mureș County) where, following an extensive project, the group will bottle premium mineral water.

La Fântâna, leader on the B2B market of bottled water in Romania – a company owned by Swedish investment fund Oresa Ventures along with Romanian entrepreneur Cristian Amza – has inaugurated a fully automated bottling line at its factory in Tălmaciu, near Sibiu.

The EUR 2M investment will streamline the bottling process of spring water in 19-litres containers (used with watercooler systems) and spring water in reusable 8-litre bottles. The new production line is fully automated and eases the process by managing the loading and offloading containers, which was previously done with human help.

In 2021, La Fântâna had a turnover of EUR 48M, up from the EUR 44M recorded the previous year. The development of the company facilitates, from year to year, investments in sustainable projects, based on high-performance technologies, in order to make operational processes more efficient. The financing of the project was made, moreover, from its own resources – a fact that proves that La Fântâna not only understands the need for radical changes, but also takes steps in this direction.

The new bottling line leverages advanced technology, such as a “sniffer” robot that checks each reusable bottle before it is washed and disinfected. The “sniffer” can detect 19 foreign smells and has an infrared detection system capable of recognizing possible foreign bodies, impurities, and cracks down to 0.4 millimetres in size. Besides more efficient washing devices, the line ensures high safety standards, reducing the human physical effort that this process previously required. Instead of physically exhausting activities, employees will take the task of overseeing the operational flow and preparing the loading and unloading of bottles.

The new bottling line, produced by the Italian company Bardi, will have two robots, and will also double the bottling capacity for water packaged in reusable 8 litres bottles. It will also increase with 40% the bottling for 19-litres. The bottling line can be efficiently reconfigured for the two types of packaging. With minor changes to the components on the same line and with a special software, both 8-litres glass-bottles and 19-litres bottles can be bottled alternatively. The configuration allows an efficient management of human resources, in both time and energy.

“The investment at Tălmaciu is in line with the sustainable business decisions of La Fântâna. The new technology is ensuring increased, more efficient production with similar energy consumption, as well as a safe and more comfortable working environment for employees”, said Cristian Amza, CEO La Fântâna Romania. ”This new line is an acquired objective in the group’s wider growth strategy that includes major investments in both people and technology in order to satisfy our customers’ expectations as well as talking in superlatives when referring to La Fântâna’s safety, performance, efficiency and governance”, he added.

La Fântâna introduced sustainable systems not only at production lines but also in distribution and energy consumption. The 8 and 19 litres packages are part of water delivery services that involve reusing the containers, thus reducing the amount of single-use plastic consumed for a vital need such as drinking water. The company aims at the proper reuse and recycling of bottles, but also at facilitating the supply of spring water nationwide.

The bottling line provides the necessary production capacity, supporting the company’s growth plans. La Fântâna is already market leader in B2B water services and continues to grow in the bottled water market for companies, particularly in this timeframe defined by a return of water consumption to almost pre-pandemic volumes. The company also entered the household consumer segment, with dedicated products and services such as the reusable 8-litres bottle, which La Fântâna delivers anywhere in the country with its own fleet upon ordering on the company’s online store.