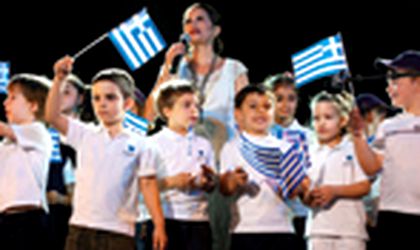 The Greek School of Bucharest Athena caters to the some 2,500 registered Greek expats working in Bucharest and 8,000-10,000 Greeks who go in and out of Romania (on business) yearly. It was established in 2008, with the support of the Hellenic Ministry of Education, and under the auspices of the Embassy of the Hellenic Republic in Romania, in response to demand from the large Greek companies operating in Romania. In the first year, the school was open only to Greek and Cypriot pupils, as well as mixed families with at least one Greek/Cypriot citizen, but from the next academic year (2009-2010), it will also accept Romanian and international pupils.
A total of 55 pupils, from Greek or mixed families, registered for the school last year. “This year, we expect the number to increase, as there is more awareness about the school and the fact that we can now enroll Romanian children as well,” say school representatives.
Teachers are appointed by the Hellenic Ministry of Education after a rigorous selection process. Most of them have between 20 and 30 years of experience teaching in Greece and other countries. Annual tuition fees amount to EUR 3,500. For an additional sum, the school also provides bus transportation to/from school and other benefits. The registration period has already started and will end in September, once all classes are filled.
For the academic year 2009-2010, the Greek School of Bucharest will award three scholarships, based on a selection procedure conducted by a special evaluation commission comprising representatives of the Hellenic Ministry of Education and the Hellenic Embassy in Romania, as well as the president of the Greek Parents' Association. The Greek School is run by the GPA, a non-profit organization. Tuition fees are primarily meant to cover the running expenses and to accomplish the long term goal, which is to extend the school's capacity and educational grades up to 12, as well as operate in its own building.
The International School of Bucharest (ISB) has around 600 children enrolled. “We have approximately 40 different nationalities so far for the new school year starting in September,” say school representatives. Approximately 25 percent of the children are Romanian, while the rest come from various countries such as Greece, China, Turkey, Argentina, Portugal, Lebanon, Syria, the USA, Nigeria, Iran, Spanish, Switzerland, India, Hungary, Canada, Bulgaria, Italy, the UK, South Korea, Iraq, Jordan, France, Indonesia, Serbia, Croatia, Slovakia, Poland and Vietnam. Last year, the ISB had 580 pupils. Fees are EUR 4,450 or EUR 5,450 for Early Years foundation, EUR 7,500 for primary school, EUR 8,000 for secondary school and EUR 8,950 for high school.
The school is run as a non-profit educational institution, under the SC Lumina Institutii de Invatamant SA, which runs other well known educational institutions in Romania. It was founded in 1996 to meet the needs of the English-speaking community, using a rented building and teaching just 17 pupils. “In order to serve an increasingly mobile international community, the curriculum gradually absorbed the practices and requirements of a number of different systems,” say school representatives.
In 2001 the school became a CIE Exam center to run the IGCSE Examinations. “This step and the school offering an IGCSE and AS/A level Program has further influenced the multicultural outlook of teachers and pupils,” said school representatives.
Despite moving the primary school to a new campus in 2003, rapid expansion saw enrollment grow to around 350 pupils by 2004, necessitating new premises. “Many different locations were considered before Pantelimon was finally chosen for the construction of a new purpose built site,” added the reps.
But will the number of pupils decrease as a result of the financial crisis? “We do not think that the number of pupils will fall, but we may not reach the number we were expecting. This is because many international companies are delaying their projects due to the recession,” say ISB representatives.
Recently, the company invested EUR 12 million in its new purpose built campus near Pantelimon Lake. The school offers a school environment on 19,000 sqm (11,000 sqm closed area), on-site sports facilities and a conference hall as well as a cafeteria.
The ISB has approximately 85 teaching staff. The majority are native English speakers who have a recognized teaching qualification from a UK university. Teachers need to have experience in teaching the National Curriculum for England and Wales and often come with either an EAL qualification, or international experience teaching English as an additional language. Romanian teachers are trained in teaching the National Curriculum for England and Wales and have a Romanian teaching qualification. They are also highly proficient in English, according to school representatives.
The American International School of Bucharest teaches from three-year-olds to 12th graders. “Our enrollment last year was approximately 710. We had around 150 new pupils register during the year,” says Lynn Wells, admission & advancement director at the AISB. There are 50 nationalities represented. Approximately 20 percent of students are Romanian, 14 percent American and the others come from a variety of countries such as Israel, the UK, Germany, the Netherlands and Korea.
Fees range between EUR 13,300 and 18,605 per year. This includes after-school activities and books and a high level of instruction from qualified teachers. Pupils may join throughout the year if places are available.
“We have around 100 people in our teaching faculty. They come from approximately 12 different countries around the world including the US, Canada, the UK, New Zealand and Romania. They are recruited primarily through international recruitment services and at international job fairs,” says Wells.
The school was founded in 1962 by the US Embassy in Bucharest. “It is a private, non-profit educational institution and therefore does not have individual owners. The AISB is a non-profit foundation governed by a board of directors and the chairperson of the board is the Deputy Chief of Mission of the US Embassy in Bucharest,” says Wells.