Giants lose out to mini models 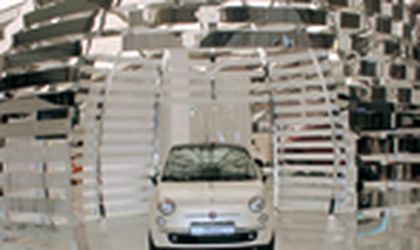 Maddening traffic conditions and the increase in diesel fuel prices compared to gasoline are just two of the reasons behind the increasing demand for small town cars. “In Romania the most popular segment is the compact one, followed by B segment. We can see a trend on the local car market for customers to orientate towards small cars, which are more practical in traffic and economical in terms of fuel consumption,” Dragos Grapinoiu, Mazda marketing coordinator, told Business Review. “Currently, besides consumption, all the advantages lie with gasoline-powered cars: price, performance, fuel cost, interior noise and fuel quality.”
Already, the largest carmakers on the local market have launched, or announced they will launch, models ranging from mini, small and compact by the end of this year.
After the launch of the long awaited mini model Fiat 500, created by Dante Giacosa, and Suzuki Splash, a fairly small model, Ford has prepared the super-mini model Ford Ka. According to market information, the car is to be revealed at the Paris Auto Show.
Mazda, a recent entry on the local market, has pinned its hopes this year on the Mazda2, but also expects results from the latest models launched such as CX-7 SUV crossover and Mazda6. “For this year we have set the sales target for Mazda2 at 500 units,” said Grapinoiu. “For CX-7 the figure stands at 250 cars and 400 units for Mazda6. In the first five months of this year Mazda sold in Romania 1,109 cars, already surpassing last year's sales. The target of 2,000 cars to be sold by the end of the year has been revised and the new goal is to sell 2,500 Mazda cars.” Grapinoiu added that from the beginning of this year 352 Mazda2 and 158 CX-7 have been sold but Mazda3 remains a leader with 374 units sold.
This is largely because prices start at approximately EUR 10,000, which is a “reasonable” price for the market. More exactly, the Mazda2 starts at EUR 9,990, the Mazda6 at EUR 19,900 and the CX-7 model from EUR 30,300.
The Romanian representatives of Audi have announced no fewer than five new roll outs by the end of the year. “We plan to launch the Audi A4 Avant, A3 facelift, S3, A6 facelift and new Audi Q5. But let's not forget about the already launched ones: the new Audi A4, Audi A3 Cabriolet, Audi TT TDI and Audi TTS,” said Audi officials. According to company information, since the beginning of this year the A4 has dominated sales and has reported a “reasonable profit”.
Minis continue to see robust sales, reporting a 60 percent increase compared with the same period last year, company officials told Business Review. The competition between the mini and small cars will continue to hot up given the slew of announcements by carmakers. For instance, Chevrolet, a brand of General Motors, plans to launch no fewer than three town cars, including the Beat model, which will replace the present Spark/Matiz. All three models will be presented next month at the Paris Auto Show.

Niche models at the starting gate
The need for small town cars instead of road ‘giants' will continue to increase, but specialists believe that niche segments like pick-ups will develop in the near future. “We are heading for a mature car market in which price will not be a decisive factor, but rather the models' benefits and needs. Segments B and C will continue to have a significant weight on the market as the cars can be used both in town and for traveling. I believe that we will assist in the development of the niche segments such as pick-ups and SUVs,” said Grapinoiu. He added that Mazda is planning to develop a car distribution and services network this year. He noted: “Our target for this year is to have 20 showrooms across the country. The company currently has nine dealerships with 11 sales points in Romania. We plan to open showrooms in Galati, Bacau, Craiova, Ploiesti and Brasov.”
Meanwhile, Renault has launched the new Renault Laguna, D segment and the new Kangoo and Kangoo Express. The carmaker is also set to unveil by the end of the year a new model, Koleos, the first crossover 4×4 by Renault.
“For Laguna we have set a target of 900 cars to be sold this year but we expect to surpass easily this figure because Romanians already appreciate this model as has been seen elsewhere in Eastern Europe,” said Jacques Daniel, commercial manager at Renault. “In Romania the Laguna is for sale at a price starting from EUR 17,900 including VAT.”
This year Automobile Bavaria dealers launched during the BMW Efficient Dynamics at the end of last month two models: BMW Series 1 Cabrio and BMW X6. According to company information, by the end of the year the company will launch two other models on the local market: BMW Series 3 and the new BMW Series 7. “The new models will contribute to reaching this year's sales target. The Series 1 Cabrio is a seasonal car which will have a limited influence within one year in terms of sales, but we expect that the BMW X6 will have a longer-term impact. The new technologies used by BMW allow increases in engine power and lower fuel consumption and CO2 emissions. In our opinion the decision to buy a car takes into consideration personal and comfort factors,” said Automobile Bavaria Group officials. The BMW X5 continues to register the most sales within the group's portfolio, but the company also expects positive results from the newcomers. Moreover, this year, Automobile Bavaria opened two new locations at a cost of EUR 4 million each. The group is also about to complete works at a new Automobile Bavaria showroom in Sibiu.
A couple of years ago, SUV and off-road cars were the heavy hitters on the local market and importers were raking in profits from the sales of these ‘giants'. But now the market has set off on a new course towards small, low consumption cars that are easier to navigate through heavy traffic.