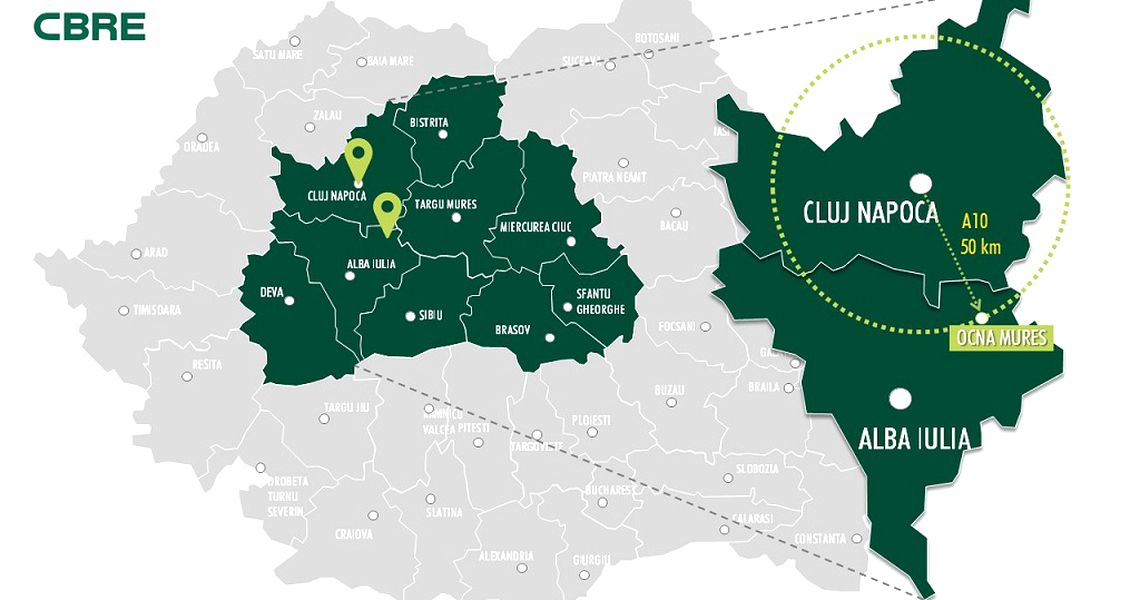 Cluj County has become a landmark in the region in terms of economic and real estate development. Recently,  investors’ interest has also extended to nearby cities, within a radius of about 50 kilometers, according to real estate consultancy CBRE Romania. A 26-hectare land, classified as an industrial park, has been put up for sale in Ocna Mures, and CBRE has obtained an exclusive mandate to develop the retail and industrial area.

The land is located in the north of Ocna Mures, near residential district Malinului, on the site of the former Soda Factory in Ocna Mures, Alba county. In close proximity to the land, the newest salt bath treatment facility is also being built and will be completed by next year. Additionally, a recreational area is scheduled to be set up nearby.

“The future project in Ocna Mures is an investment-competitive alternative to cities such as Turda, Cluj-Napoca or Targu Mures, considering its location, only 8 km away from the A10 motorway junction and about 50 km away from Cluj-Napoca, as well as the existing infrastructure and utilities available,” said Valentin Popescu, senior consultant within the Land Development department of CBRE Romania.

The land comprises a total area of 26 ha and a for part of it, CBRE Romania is negotiating with several food operators, since modern retail in Ocna Mures is currently poorly developed.

“The lack of a modern retail offer compells the city’s inhabitants and those from the neighborhood to shop in Cluj, Turda or even Alba Iulia. Ocna Mures has specialized workforce, which is one of the project’s major assets. Attracting an investment in the retail sector as well will prevent inhabitants from moving to other cities,” added Ion Dinu, senior consultant within the Land Development department of CBRE Romania.

Ion Dinu and Valentin Popescu joined the CBRE team in April, within the Land Development department, having 15, respectively 5 years of experience in developing projects in the retail, food and industrial fields. Enlarging the CBRE Land Development team is part of the company’s strategy to provide investors and developers with an integrated product portfolio, implemented together with the retail department, as well as with office and industrial space.

About one million square meters of land were traded on the Romanian market in the first half of 2019, only 33 percent of this area being located in Bucharest, according to the most recent CBRE Research report. Investors were mainly interested in land for industrial (49 percent of the traded area) and retail (45 percent of the total area) developments.

Nationally, in the first half of 2019, retail developers invested about EUR 45 million in the purchase of a total area of 460,000 sqm, the most representative transaction being the acquisition by Auchan of a 220,000 sqm land in Resita, Caras Severin county.

One of the most important land transactions in the first semester, in the industrial sector, was the acquisition of a 12ha area in Craiova by local company Element Industrial. Furthermore, one of the prominent developers on the local market, VGP, chose in turn the connection with the A3 motorway, securing a 20ha land located near the junction of the Capital Ringroad with A3. According to CBRE Research data, additional land transactions for large industrial areas of more than 10 ha are expected to be completed by the end of the year.

Tiberiu Teleanu (Auchan) will be a speaker at re:FOCUS on eCommerce, Retail &...

Tudor Iuga (CBRE) will be a speaker at re:FOCUS on eCommerce, Retail &...