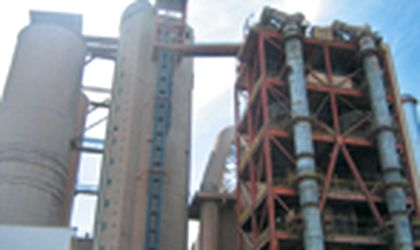 Cement producer threatens to relocate outside the EU
Carpatcement could relocate its production if producers have to buy emissions certificates, Mihai Rohan, general manager of Carpatcement Holding, said recently. According to the cement producer, the production of a ton of cement requires 0.8 to 0.9 such certificates, with prices at EUR 30 to EUR 35 per certificate.
Following the European Union's proposal, the costs of producing a ton of cement will increase by 60 to 80 percent, not including the price of other utilities such as electrical power, according to Carpatcement officials.
The cement producer said the related costs cannot all be automatically passed onto the buyer, which will affect the profitability of the entire cement industry. The companies that have operations in this industry – especially those active in Romania, which is at the border of the European Union – are considering importing cement from countries outside the economic area, where producers are not forced to buy the emissions certificates.
According to Carpatcement, Romania has reported 10 times bigger cement imports in 2008 compared with the last year, buying cement in from countries such as Ukraine, Turkey, Serbia and China. Carpatcement, which asked for but received fewer emissions certificates following the National Allocation Plan approved by the Romanian government, went to court with the local authorities because the certificate allocation has been carried out unfairly, according to the producer. If certificates allocation is based on auctions, as the EU has proposed, Carpatcement said that national production would reach zero.
This would have immediate consequences: the loss of 5,000 jobs in the cement industry and another 15,000 in related activities, the loss of EUR 350 million per year in contributions to the state budget, imports of cement clinker estimated at 20 millions tons yearly, which would cost EUR 1.2 billion to EUR 1.6 billion per year, a halt to waste-processing services delivered by the cement industry and a brake on infrastructure works, Carpatcement representatives have said.
Cement producers see an urgent need for their industry to be defined as one of the sectors with a maximum risk of relocation and thus, “carbon leakage.”
Therefore, Carpatcement officials are calling for 100 percent free allocations of CO2 emissions from 2013 to 2020 and the extension from three to five years of the revision period for listing the sectors at risk of relocation, to provide the necessary foresight for development strategies in this industry.
Meanwhile, last month, the European Cement Association (CEMBUREAU) released a statement quoting a study highlighting the impact of the 2013-2020 EU Emission Trading Scheme (ETS) proposal on the European cement industry. This study, requested by CEMBUREAU and carried out by the Boston Consulting Group (BCG), concludes that “clinker and cement production in the EU will be seriously affected by carbon leakage.”
As a consequence, the relocation of clinker production to countries with no carbon constraints will accelerate from 2013 and will continue in the following years, the study says.
“The results of this study highlight the point which we have been making all along: that the European cement industry is vulnerable to carbon leakage. Recognition of this fact is urgently needed as delay is already impeding investment decisions in the European Union. In order to assess the risk, we need to take a pragmatic approach, that of a good, reasonable businessman looking at the future” said Jean-Marie Chandelle, chief executive of CEMBUREAU. He added that with full auctioning at a price above EUR 35 per ton of CO2, integrated cement production (meaning cement and clinker) would be wiped out in the EU. BCG stresses that, even without auctioning in the EU-ETS, the proposed cap would still affect one third of the European cement industry.
In addition, if the entire CO2 cost were to be passed on to consumers – an unrealistic hypothesis as cement and clinker are already exposed to international competition – the European cement industry would still be vulnerable to
carbon leakage, according to Chandelle.
The move would damage the international competitiveness of the European cement industry, it is argued. Moreover, the study indicates that the relocation of the European cement industry would have a negative impact on global emissions. The results of the study have been presented to all concerned stakeholders, including EU authorities, national governments, their
permanent representatives in the EU, as well as trade unions representing workers in the cement industry.

Cement industry under spotlight, EU suspects cartel tactics
Recently, according to the international wire, the competition authorities of the European Union have started an investigation into the world's largest cement producers operating a wide number of facilities in Europe, such as Monterrey-based Cemex, French Lafarge, Swiss-based Holcim, German building materials company Dyckerhoff and HeidelbergCement.
According to the wire, the companies under investigation said they had been searched. Dyckerhoff AG said that it had not breached anti-trust rules, while HeidelbergCement also said its offices had been searched.
“European Union Competition Authority representatives have conducted a search in Cemex's offices in Germany and the United Kingdom,” Cemex said in a brief statement at the beginning of last week, quoted by the newswire. Meanwhile Lafarge and Holcim have also acknowledged in the international media that they have been searched by the EU authorities.
The last such major investigation was conducted in 1994 and resulted in fines for running a cartel. One of the incriminated companies was Lafarge, which was found to have been operating as a cartel, dividing up the cement markets and sharing information.
In Romania, Holcim currently runs three production cement plants in Turda, Campulung and Alesd, besides 16 environmentally-friendly concrete stations and five aggregates units.
At the beginning of 2008, the company announced it would assign EUR 12.5 million to building five environmentally-friendly concrete stations in Bucharest, Cluj, Timis and Iasi.
According to the company's estimates, Holcim Romania expected to make EUR 135 million worth of investment compared to the EUR 123 million it made in 2007 in modernizing and the construction of two new cement production facilities, as well as building a power unit designed for internal consumption, a plan it hoped to complete within five years.
In June, the aggregate materials and concrete division of French group Lafarge in Romania announced it was in talks over the takeover of three local producers, with one of them to be finalized this year. The announcement was made by Bruno Roux, the president and general manager of the division, according to a newswire.
The acquisitions will be made with the budget of the development investment division, which amounts to EUR 25 million.
The division comprises companies Lafarge Agregate Betoane, Lafarge Comnord, Lafarge Betoane and Cariere Plus, which acquired the company GHM Mixbeton Cluj-Napoca, specialized in concrete production.