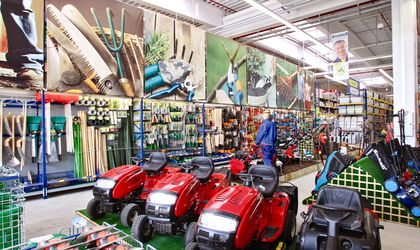 A market drop of 20 percent, an increase in VAT and belt-tightening consumers have not scared away DIY newcomers. Business Review finds out why.

It is said that Romanians love to believe that they all have craftsmen’s skills. And this belief has brought investments by seven of the biggest European do-it-yourself (DIY) retailers, making it the most overcrowded market in Central Europe, says Nicola Szekely, country manager of bauMax Romania.

BauMax, Bricostore, Hornbach, Obi, Praktiker, Mr. Bricolage and the latest entry Leroy Merlin have all spotted the potential of the EUR 1.3 billion market, a figure recorded in 2010 after a 20 percent drop year on year. “There are two important needs in Romania: the need to save money and the need and desire for people to do work by themselves,” adds Szekely.

And as the country’s 1.2 million public sector workers and 5.4 million pensioners have seen their incomes drop considerably, DIY stores seem to have found the right niche market. The lack of subsidies for heating Romanian households and the high cost of energy will push citizens to look for new methods to reduce consumption, say players, and the subsequent investing in new heating systems or thermal insulation for their own flats will manifest as new investments in DIY products.

In addition, as the number of middle class buyers who can afford a mortgage has fallen, interest in repairing and modernizing existing homes has increased. “Almost 80 percent of Romanian citizens plan to improve their homes in the next five years, through renovation or major repairs,” says Alexandru Ciobanu, president of BCR Banca pentru LocuinÅ£e. His view has support from the bauMax representative: “In Romania consumers’ plans to improve their current homes over the next 12 months have held up better than their intentions to purchase a home. Moreover, household consumption is still very low, but the consumer confidence indicator has shown some improvements over recent months.”

The great expectations of DIY retailers for the coming period also reflect the improvements in the living standards of Romanian citizens likely to come during the elections. This should boost expenditure on renovating homes, rather than buying new ones.

Moreover, according to the housing bank BCR Banca pentru LocuinÅ£e, the home loan saving system has increased its number of clients from 265,000 in 2009, to 390,000 in 2010. Around 70 percent of the people now putting money into such a system – which encourages saving, supports refinance loans and the improvement of the building fund, and gives home state premiums of 25 percent of the annual saved amount – plan to use the money they have saved plus a loan to modernize, refurbish and carry out major repairs on their current homes in three or four years. This, once again, is good news for DIY sales.

Prices take a hammering
These good perspectives have brought a new competitor onto the shrinking market of the past two years, one keen to become leader of its field. French retailer Leroy Merlin has opened a 16,500-sqm store in Bucharest after investing EUR 28 million, with the motto: “Amazing prices for a comfortable home”. “We didn’t pursue the company or ask Leroy Merlin to come to our retail park. The company came to us and decided that the area and our project were both perfect for its store in Romania,” says Panico Panayi, president of Nova Imobiliare, the developer of retail center Colosseum.

“Despite the obvious drop in sales on the DIY segment, the French retailer decided to enter because it believes in the Romanian construction market.
The shop’s results will determine the next investments. But, like Leroy Merlin, we also believe in the potential of this market,” comments Daniel Guzu, founder of paint producer Fabyo and general manager of Duraziv, the producer of paints and adhesives for construction, whose products have recently found their way onto Leroy Merlin shelves.

The firm is entering the most competitive market in Central Europe, so its strategy is to offer the best prices on the market. “On average our prices are 20-30 percent lower than the next lowest market price,” said Philippe Hauville, managing director of Leroy Merlin Romania, adding that the store will have almost 300-400 products on promotion every month.

It is a similar story elsewhere. “We also have a great sales team which investigates the best price offers and tries to obtain from producers the lowest prices on the market,” says Szekely of bauMax.
Which invites the question: how can Leroy Merlin’s single shop achieve its promised amazing prices? According to company representatives, this is a matter of strategy. No other DIY retailer has 90 percent local suppliers, like Leroy Merlin does, the company says. These suppliers are ready to suffer to be on Leroy Merlin shelves, and in fact those of any other DIY store.

The number of residential building permits issued fell 5.6 percent to 27,167 in the first eight months of 2011 from the same period of last year, according to the National Statistics Institute (INS). Also, from January to July the volume of new construction works dropped by 4.2 percent and maintenance works by 1.7 percent, while repairs increased by 10 percent. Against this background, it is no secret that suppliers’ interest in DIY is growing stronger and stronger.

“We believe that Romanian producers were pressed to reduce their prices so much by the Leroy Merlin sales team. But there is an issue. Although, initially, customers will come, attracted by the low selling prices, they will also look for other services, services which for example they can find at Dedeman and Hornbach. So, as Leroy Merlin is present in the market just with one shop, I don’t know how the firm will manage to keep the prices lower than the rest of its competitors,” says Ileana Nicolae, general manager of Sika Romania, local subsidiary of Swiss group Sika, a producer of specialist building chemicals.

Although the company’s products are specialized, during the crisis it has been one of many firms that have reoriented some sales from a niche market to a wider one, that of DIY. And figures show that this decision was a positive one as Sika’s DIY sales as a percentage of total sales doubled in 2010 in comparison with 2009, to reach 20 percent.

“DIY stores are and will continue to be very attractive for suppliers thanks to the advantageous exposure of products, the great number of ways in which you can promote your products, thanks to the national coverage, and, an essential element in this period, the secure income they bring,” said Guzu.

Writing on the wall?
Although suppliers are showing great interest in the DIY scene, in 2010 the market dropped by 20-30 percent, and expectations are that it will remain at last year’s level in 2011.

The drop was felt differently by players. According to the Ministry of Finance the most profitable DIY network doesn’t belong to a foreign retailer as might be expected, but to a homegrown one. In 2010 Dedeman posted, throughout its 21 units, profit of over EUR 36 million thanks to its aggressive expansion campaign, which has continued in 2011 with another three stores. Today its network consists of 24 outlets, and by 2015 the number should exceed 40. The management of Bricostore and Hornbach’s stores have made them into the second and third most profitable companies in their field, posting EUR 4 million and EUR 3.3 million in profit
respectively.

While Praktiker’s high brand awareness has made it the leading name in the sector, the firm was in the red last year, recording a EUR 7.4 million loss in 2010. Obi’s seven stores have continued to see income fall since 2009, and figures show that it has lost over EUR 18.3 million in 2011.

BauMax and Mr. Bricolage have also reported losses of EUR 3.9 million and EUR 2.2 million respectively. Looked at on a per-outlet basis, Obi is currently faring worst, with an average per-store loss of EUR 2.6 million, while for Praktiker the average loss per outlet is EUR 273,000. And even though the market’s potential is high and retailers are trying to keep prices low, the end-consumer generates a process of natural selection.

“In three years there will be fewer competitors than now. I would not be surprised if the number of stores fell in the next period,” says Nicola Szekely, admitting that the Romanian DIY market is no promised land for investors.