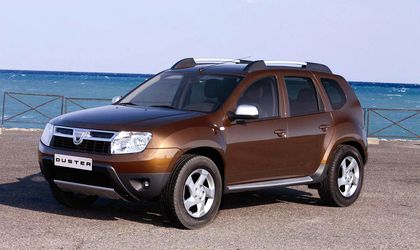 Despite the stalling local car market, Dacia keeps accelerating its sales, with the main engine for growth being the Duster and the increased demand from European markets the new model is enjoying.

After the solid results Dacia registered last year thanks to increasing exports – especially to Germany, which had a car renewal program in progress – Dacia officials have now found a new goose to lay it some golden eggs: the Duster. Salvation is taking the form of exports: some 20,000 orders came for the model from France in the first six weeks of its launch.

Meanwhile, in Spain, the Mioveni-made brand sold 1,668 units last month alone, up 231 percent from the same period last year, according to the Spanish Car Importers Association.

The car was launched on the local market on March 18, while in France it was presented to the public on April 8, with a starting price of EUR 11,900.

“To ensure this price, we used existing components within the

Renault-Nissan alliance, many made for the Sandero. For example, the 4×4 drive comes from Nissan 4X4 transmission. We avoided creating new spare parts, which allowed us to build a robust car at an unbeatable price,” said Vincent Carre, marketing manager at Dacia.

Business Review has road-tested the vehicle between Bucharest and Ramnicu-Valcea, and has observed how the car behaves in the city, on the highway, on bends and off-road. The conclusion is that the car delivers a surprisingly good performance and fully merits its price tag, although before the road-test it seemed a little expensive.

The model could reach at least last year’s level in sales volume. In 2009 Dacia sold 311,282 units, a 20.5 percent increase on the previous year. Of this figure, 269,420 cars were sold in European countries and the rest on the local market.

According to company information, Dacia invested EUR 290 million in developing the Duster model at its Mioveni factory, in the new gearbox and the Euro 4 and 5 motorizations. Of this sum, about EUR 70 million was invested in the factory.

Moreover, Renault Technologie Roumanie (RTR) officials told BR that the test center in Titu will be finished in September this year, after a EUR 100 million investment. The facility joins test centers in Aubevoye and Lardy (France).

“The Titu center will not merge the RTR teams in Bucharest and Mioveni, but complements them, with the testing of vehicles and spare parts, which has not existed until now. By the end Titu will create about 300 new jobs,” Anca Oreviceanu, communication manager at RTR, told BR.

She added that the Titu center will include test banks for complete vehicles and for components (engines, components, subassemblies). They will be able to recreate extreme operating conditions, with a testing facility for resistance to cold, a sun simulator and rain cabin.

The company is not resting on its laurels and has continued focusing on its internal resources, with internal mobility being a goal. Also, the carmaker has announced that in order to keep costs under control it has recruited the necessary personnel for certain projects: entry-level positions, specialists and middle management.

Currently, Renault Group in Romania has 17,478 employees, of whom 15,329 work at the Mioveni platform.

Dacia’s plans do not stop here. According to foreign media reports, the carmaker intends to launch a new small class model at a price of less than EUR 5,000, which will be called Dacia City. Likely competitors include the Fiat Panda, Hyundai i10, Smart for two and the new Toyota iQ.