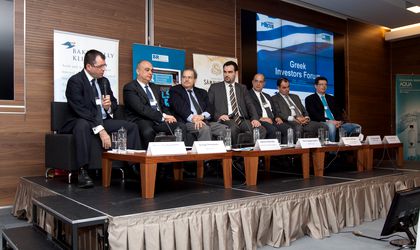 What hot domains are poised to attract investors onto the local market? What changes that could benefit investors in Romania have been implemented by the authorities? Why have projects in the wind and agricultural sectors not caught the eye of a private equity fund? Businesspeople who attended the Greek Investors Forum organized by Business Review tackled these and other pressing issues.

One of the sectors on which prospective Greek investors are pinning their hopes is farming. “Greek investors interested in coming to Romania are looking at the acquisition of big plots for agricultural purposes,” said Vasilis Ioannou, member of the board at the Hellenic Romanian Chamber of Commerce and Industry. Another very attractive domain is renewable energy. “There is a lot of interest in agriculture and energy. Some funds selectively want to invest in these two sectors as well as in operational buy-out – where funds participate as majority shareholders in companies where they conduct normal commercial activity. And in real estate, we are seeing some minor activity in commercial spaces,” said Mamas Koutsoyiannis, managing director, Baker Tilly Klitou and Partners. Still on the energy theme, Georgios Tsitsas, GM of Edrasis C. Psallidas, added, “It is estimated that from Dobrogea to Moldova, there will be a capacity of 15 Gigawatts in the coming years. At the moment in Romania we have 1 Gigawatt installed and other locations are starting to appear.”

However, for a private equity fund, agriculture and energy may prove not to be the right choices. Theodore Kiakidis, partner at Global Finance, outlined the fund’s experiences. “I dare say that wind doesn’t seem very attractive from a private equity point of view. The reasons are that the pricing is very complex and subject to regulations. Also, two thirds of the revenues come from green certificates which have an artificial price here in Romania. There is an over-supply of energy projects but it remains to be seen how many of them will be carried out and have returns. Overall it is a risk-return equation that does not make sense from our perspective. As for solar and hydro energy, we do not have a final position on it yet because we are still studying the possibilities,” he said. Moving to agriculture, Kiakidis sees it as “a very fashionable area” but that is all. “We looked at that as well but it seems the returns do not work out for private equity,” he said.

Over time, Global Finance has shifted focus between various domains. While in the past, the fund was more interested in healthcare, financial services and food retail, its attention is now directed towards manufacturing. “Romania is a very good country for manufacturing – both for local consumption and export, and in that category you can include anything from food, pharmaceuticals, building materials and industrial goods,” said Kiakidis.

Another attractive domain is business services, where Global Finance has already invested in two companies. A recent interest of the fund is recycling. “We have just completed a EUR 23 million investment in Green Group, a sizable Romanian company in recycling,” said Kiakidis. From the point of view of banks, the same domains stick out. “If you want to establish a healthier economy and banking climate, you have to establish a system based on new lending criteria and focus on segments that are promising for the country. We think that agriculture, the food industry and energy are promising – but based on certain criteria, because we do not want energy to become the country’s new real estate,” urged George Pentaliotis, head of corporate banking at Bancpost.

Construction is another sector that is picking up after a dramatic downturn. “In the construction industry in Romania, we had a very difficult period from 2008 to the end of 2010. In 2011 we started to see improvement. The cement industry was reported to have shown a 5 percent improvement,” said Tsitsas.

According to the BNR, Greece is in fifth position with investments of more than EUR 3 billion. However, the Greek Embassy, represented by Ioannis Paschalis, minister counselor for economic & commercial affairs, estimates it ranks “fourth or even third” since embassy data show Greek investments in Romania have surpassed the EUR 4 billion mark. “Countries like the US or UK rank much lower than Greece among the top foreign investors in Romania. This shows the significant contribution of Greece to the Romanian economy in recent years,” he said.

Greece is represented across most sectors by firms with a local footprint. Telecommunications, where it has OTE, which controls Cosmote and Romtelecom, and the six Greek banks on the market are the most conspicuous but there are more. “Greek investments cover almost everything – construction, commerce, the food industry, aluminum. The Greek presence is everywhere,” said Ioannou. He mentioned investors such as dairy firm Olympus, food firm Chipita, Alumil in the aluminum business, constructor Octagon and Roberto Jewelry in the luxury field as important investors in the past year.

Since last year, the fiscal framework has undergone several significant changes. Among these, Koutsoyiannis mentioned the unification of the social security contribution and the automatic de-registration from VAT for inactive companies of six months and above. “A lot of investors who invested in real estate and have long-term inactivity have to be careful because if there is any VAT to be claimed they might lose it forever if their company is automatically de-registered,” he warned. “Of course, the procedure provides steps to re-register.”

Thirdly, starting this year, there are stricter taxation rules for non-residents in Romania. Non-residents who stay in Romania for over six months must complete a special form and documentation that have to be filed with the Romanian tax authorities, Koutsoyiannis explained.

Moreover, major changes have been taking place in the legal framework. In the spring of 2011, the new Labor Code was adopted, simplifying procedures.