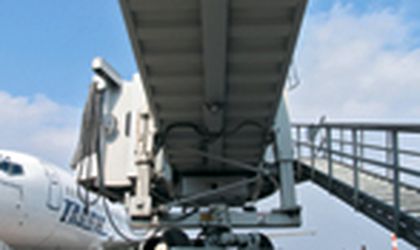 Bacau County Council and the authority operating the George Enescu Airport have decided to modernize the airport through a concession contract granted to a private investor. The City Council started the procedures one and a half years ago when the fate of the airport was linked to the modernization project.
This is the first time that a regional authority has tried to grant a concession for the modernization and operation of a regional airport of this size. As such, it is a pilot project, not only for Romania. “Bacau County is trying an innovative scheme to accelerate the economic and social development of the region. We are supporting them with our expertise and experience on previous airport concessions in the region. Since there are currently more airport concessions on the market, Bacau is competing with cities like Skopje and St. Petersburg which are trying to do the same thing. Investors will have to make choices,” Bernard Nauta, director for PPPs at Deloitte Central Europe, told Business Review.
Studies completed by the consortium made up of Iptana (technical component), Deloitte (financial consultant) and Bostina and Associates (legal consultant) found that the best way to attract the minimum EUR 44.13 million investment was to lease the airport for 35 years to a private investor.
“The runway should be upgraded from a PCN (Pavement Classification Number, which refers to the strength of the runway) of 19 to a PCN of 65 so it can handle bigger planes. It does not need to be longer than the current 2,500m. The new passenger terminal should be around 7,000 sqm to be able to handle 450 passengers per hour during peak hours,” said Nauta.
Studies predict that at the end of the concession period the airport traffic will reach 1.2 million passengers annually. Cargo traffic is estimated to have an annual growth rate of 0.5 percent from 2009-2020 and 4 percent by 2039.
The actual bidding will be organized on June 12 and so far five companies have bought the documents. “There are three companies from Romania and two foreign firms interested in participating. One of the conditions to do so is to have had relevant experience in airport administration,” Dragos Benea, Bacau County Council president, told Business Review.
According to him, one of the key aspects of the lease is the sum that will be paid by the winner to the County Council. “We will lease the works which will be done at the airport. The investor will have to give a certain percentage of the profit or a fixed sum to the County Council but there is no limit imposed through the contract,” said Benea.
The Deloitte official addressed the risks that the lease involves. “Nobody can predict for sure how the airport will develop in the next 35 years. Forecasting future passenger numbers is a bit like forecasting the weather. One thing is sure: the investor will first have to invest a lot of money to modernize the airport. It has in total 35 years to recover the investment and realize a return on it. After that, it will have to give the airport back to the regional authority in a good state. Therefore, the investor takes a lot of risks,” said Nauta.

The stake
George Enescu Airport in Bacau is one of the most important infrastructure facilities in north east Romania. It is one of the region's main connections to Western Europe, especially for Romanians who work abroad. Currently, the airport operates routes to various destinations mostly in Italy and Germany. In the long term it could also become a driver for tourism in the region. Passenger numbers have soared in the last five years, from 12,643 in 2002 to 114,323 last year. The loaded and uploaded cargo tonnage went from 75 to 433 tons over the same period. For many years, the military has been a user of the airport and the average number of take-offs and landings of military aircraft reaches 4,000 per year.
In 2001-2002 there was only one contracted airline that operated regular flights from George Enescu Airport: Carpatair. From 2003, the Italian company Club Air also started using the airport. Subsequently, the facility also signed up Tarom, the Romanian national airline, and Blue Air joined on February 1, 2008 with one flight per day. Currently, there are scheduled flights between George Enescu Airport and two destinations in Romania and twelve destinations in other European countries.
“Another four flight operators have shown interest in using George Enescu Airport but without the necessary investments we cannot manage this level of traffic,” said Radu Bondar, GM of George Enescu Airport. According to airport officials consistent investments are required if the airport is to cater to more airlines. Several facilities need refurbishment and so, in the short and mid-term, modernization of the airport is essential.
The financial consultant says that if the tender is successful such concessions could be alternatives for other regional airports in Romania as well. Bigger airports like Otopeni and Baneasa are already feasible options.
Concessions can be a means to obtain private financing for necessary short-term investments without depleting the public budget, and to increase the efficiency of airport operations. Nauta added: “One alternative is privatization, but then the authority loses practically all control and does not get the airport back again. Another alternative is for the public authority to remain owner and operator. In that case investments have to be paid from the public budget, and therefore by taxpayers, which is often a problem and can lead to huge delays. Furthermore, the management of airports by public authorities is not always very efficient.”