Trump, after meeting Kim Jong Un: “There is no longer a nuclear threat from North Korea” 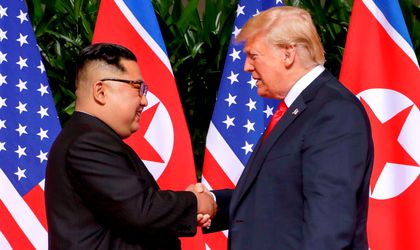 US president Donald Trump said there is no longer a nuclear threat from North Korea, on his return from a summit in Singapore with North Korean leader Kim Jong Un.

The summit was the first between a sitting U.S. president and a North Korean leader.

“Everybody can now feel much safer than the day I took office,” Trump said on Twitter.

“There is no longer a nuclear threat from North Korea. Meeting with Kim Jong Un was an interesting and very positive experience. North Korea has great potential for the future!”

Kim and Trump invited each other to their respective countries and both leaders “gladly accepted,” said the North’s Korean Central News Agency (KCNA).