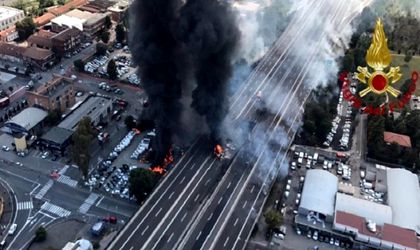 The Romanian Ministry of Foreign Affairs (MAE) says that one Romanian was injured in the blast that hit the outskirts of northern Italian city of Bologna.

The fire and explosion were recorded on the highway near the airport after the accident between a tanker and a lorry. One died and 68 were injured in the incident.

The MAE said that the injured Romanian was a driver in one of the trucks that was queuing on the motorway. He suffered minor injuries and was released from hospital after a few hours.

The accident happened on the Casalecchio junction that connects the A1 to the A14.

Many of the injured were hit by debris and broken glass from the explosion, Italian media reported, according to the BBC.