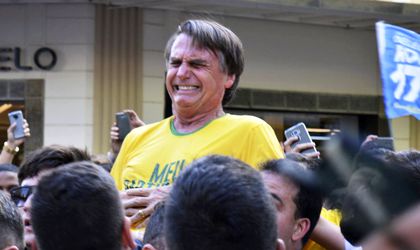 Jair Bolsonaro, the Brazil’s candidate for the presidential position, called “Tropical Trump”, had been stabbed while campaigning and it is in a serious condition. He was rushed to the hospital in Juiz de Fora, about 200 km north of Rio de Janeiro.

According to the doctors, the trajectory of the wound provoked various injuries. The knife cut a vein in his abdomen and caused injuries in the intestines.

Initially, the wound were described as superficial, but later the candidate was said to arrive at the hospital almost dead. Bolsonaro will be in the hospital for at least a week or ten days.

Video from social media showed the moment when he was attacked as he was carried on the shoulders of supporters. He was wearing a bulletproof vest, but he was stabbed just below it.

The alleged attacker is Adelio Bispo de Oliveira and he is in custody after being also beatn by the supporters.

Political violence is on the rise in Brazil. In the spring, Marielle Franco, a Rio de Janeiro city council was murdered along with her driver Anderson Gomes, a crime that is yet to be solved. In the same month, in March, two buses in a campaign for former president Luiz Inacio Lula de Silva were hit by gunshots.

Bolsonaro has polarized public opinion with homophobic comments, calls for looser gun laws, attacks on the left and praise for the 1964-1985 military dictatorship. He is also facing trial before supreme court for speech that incited to hate and rape.