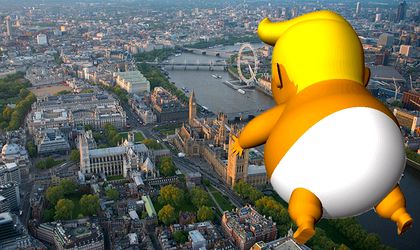 A giant blimp called “Trump baby” has been given the green light to fly near the UK parliament during Donald Trump’s visit on July 13. The Greater London Authority approved the request after thousands signed a petition and donated to a crowdfunding campaign that raised more than GBP 16,000 – more than three times the original target – to get the inflatable Trump off the ground, Sky News reports.

The balloon will be tethered to the ground and restricted from going higher than 30 meters. It will fly between 9.30 am and 11.30 am on July 13, the day of the US president’s visit to the UK and a “Stop Trump” march in central London.

A spokesperson for the Mayor of London, Sadiq Khan, said: “The Mayor supports the right to peaceful protest and understands that this can take many different forms.”

The group behind the idea call themselves anti-fascist, and say that the point of the stunt is to show that fascists are not welcome in the UK. One activist involved in the project told Sky News that initially the Mayor’s office didn’t recognize the six-meter inflatable Trump Baby as a legitimate form of protest, but after a surge in public support the City Hall gave in to the requests. He added that the balloon is “an obscene mutant clone of the president”, and said that it will “hold up a huge mirror of truth to the world.”