Democrats Abroad: The attack on the Capitol on the afternoon of January 6 may be the most dangerous moment in US history since the Civil War 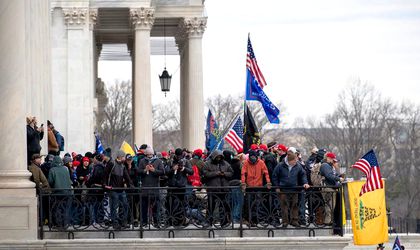 Democrats Abroad, the official Democratic Party arm for the millions of Americans living outside the United States, issued a press statement regarding yesterday’s violent protests on Capitol Hill. Read the statement, in full, as well as a reaction from Radu Florescu, Committee Country Chair of Democrats Abroad Romania.

“This attempted disruption of Congressional certification of the election is the culmination of years of Donald Trump and his Republican enablers that have promoted white supremacy and racial discord, feeding them with lies and falsehoods, and preparing them for violence.

While Democrats Abroad supports the right of all Americans, including pro-Trump demonstrators, to express their views, we demand prosecution to the fullest extent of the law of those who would use force to overthrow our elected government. Illegal protests that use violence and vandalism should be treated as such. The color of their skin should not allow them to walk away without ramifications. We believe the racial injustice on evidence here is deafening.

We are grateful to our Congressional Representatives and Senators who were, as Senator Amy Klobuchar (MN) has said, committed to reconvening and finishing the job that they started today. Anarchy will not prevail. Democracy will.”

Radu Florescu, Committee Country Chair of Democrats Abroad Romania, said: “What took place in Washington yesterday was a stain on the US standing both at home and abroad. The falsehoods and lies that have been streaming from the Trump administration has culminated into violence at Capitol Hill unprecedented in our nation’s history. Despite these acts of violence, our country will prevail under a new leadership that will work to unite our nation and bring our allies into the fold. After the certification process by Congress, we look forward to the incoming Biden administration and a new beginning for America.”