UPDATED. Celebrities and personalities that got infected with the new Coronavirus 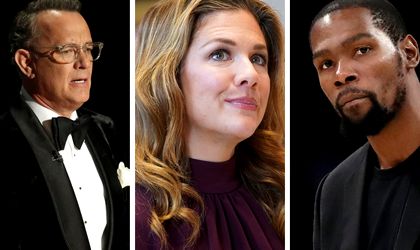 Being a celebrity or an important politician doesn’t make one immune to a global pandemic, a reality proven unfortunately more often these days. BR created a list of the personalities that so far have been infected with the covid-19 and have communicated about it.

Possibly the most shocking piece of news was received today when we found out that Prince Charles, 71, is displaying mild symptoms “but otherwise remains in good health”, a spokesman quoted by BBC said, adding that the Duchess of Cornwall, 72, has been tested, but does not have the virus. Charles and Camilla are now self-isolating at Balmoral.

He joins another Royalty, as Prince Albert II of Monaco was reported ill on Thursday. The 62-year-old reigning monarch confirmed he had tested positive for the virus, but he is not is a worrying state and continues to work from his home office in the palace, being in constant contact with members of his government.

Rand Paul, US Republican Senator from the State of Kentucky was the first member of the upper house of the United States Congress to be tested positive with Coronavirus.

The European Union’s chief Brexit negotiator, Michel Barnier, announced in a tweet that he has contracted the virus.

Jeremy Issacharoff, the Israeli ambassador in Germany tested positive for the novel coronavirus, the Israeli Foreign Ministry announced in a statement March 17.

Franck Riester, the French Minister of Culture announced he is self-isolating in his Paris home after contracting the virus.

The Mayor of Miami City, Francis Suarez confirmed, on March 13, that he has contracted COVID-19.

The worldwide famous opera star Plácido Domingo disclosed on Sunday that he tested positive for the coronavirus. 79 years old,  Domingo was in Mexico and shared the news in a post on Facebook. According to New York Times, he said that he and his family were in self-isolation “for as long as it is deemed medically necessary” and that he decided to get tested because he had been experiencing symptoms of a fever and cough.

According to Rolling Stone and USA Today, Bon Jovi’s keyboard player David Bryan took to Instagram on Saturday to tell fans that he tested positive for COVID-19 and said “I’ve been sick for a week and feeling better each day. Please don’t be afraid!!!”

On March 12th, Tom Hanks and Rita Wilson, both 63, confirmed they had tested positive and are in quarantine.

Kristofer Hivju from Game of Thrones who played the wildling warrior Tormund Giantsbane, self-isolated with his family after contracting the illness and declared on Instagram that he is feeling good, only having mild symptoms of a cold.

Mark Prendergast, Kodaline’s guitarist, tested positive and believes he caught coronavirus while at Heathrow Airport. The musician told Irish radio station RTE 2fm he had a “very, very dry cough” while he was at his parents’ house.

Singer Charlotte Lawrence tested positive for COVID-19 and confirmed it on her Instagram post on March 17th.

Lucian Grainge, the 60-year-old chairman and CEO of Universal Music, has been hospitalized after testing positive for the novel coronavirus, multiple sources have confirmed to Billboard and The Hollywood Reporter.

The 29 years old music producer Andrew Watt tested positive for the novel coronavirus, according to his Instagram post on March 16th.

The British actor Idris Elba was confirmed will on March 17th and declared he felt fine and had no symptoms, but had been isolated since he found out that he may have been exposed to the virus.

Daniel Dae Kim, known for his roles as Jin-Soo Kwon in Lost, Chin Ho Kelly in Hawaii Five-0, Gavin Park in Angel, and Johnny Gat in the Saints Row series of video games learned that he tested positive for COVID-19 and shared his diagnosis in an Instagram video, explaining that he’s been in isolation in his home in Hawaii since last Sunday.  His Instagram video update shows that he is doing fine.

Olga Kurylenko, a 40-year-old Ukranian-born actress, who starred alongside Daniel Craig in “Quantum of Solace,” shared a photo of her window at home along with the news of her diagnosis, on March 15th.

Rachel Matthews, Honeymaren’s voice in “Frozen 2,″ tested positive for the novel coronavirus and took the news to her Instagram story on March 16th.

According to playbill.com, Moulin Rouge!’s star Aaron Tveit shared March 23 that he and his partner Chad Kimball have been diagnosed, noting that he has been in self-quarantine since Broadway theatres went dark March 12. He says his symptoms have been mild—similar to a cold with no fever—and that he had lost his sense of taste and smell, which has been a sign of the virus for some people.

Bad news came from Cy Tucker, singer, 77, who died on Tuesday after falling ill with the symptoms of Covid-19 a week before, the Liverpool Echo reported. The Liverpool musician was part of the city’s Merseybeat scene and performed in the pubs and clubs in the city for about 60 years. With band Earl Preston and the TTs, he played on line-ups alongside the Beatles in the 1960s.

Best-selling Chillean writer Luis Sepulveda, who lives in Northern Spain, announced he is infected with the virus.

Romanian writer and anti-communist dissident Paul Goma, died on March 25 after being admitted on March 18 in a Parisian hospital, being infected with Coronavirus.

The co-writer and original singer of I Love Rock ‘N’ Roll, Alan Merrill, has died after contracting coronavirus.

His daughter Laura shared the news, saying the 69-year-old had been healthy enough to play shows a few weeks ago. I Love Rock ‘N’ Roll became a global hit for Joan Jett in 1982 and has been covered by artists ranging from Britney Spears to Weird Al Yankovic.

Coronavirus also claimed the life of country singer Joe Diffie over the weekend, while the family of Nashville legend John Prine said he was critically ill on a ventilator and being treated for Covid-19 symptoms.

Tony-winning playwright Terrence McNally died at 81 due to coronavirus complications, while Lucia Bosè, an Italian actress noted for her performances in films from the 1950s died at 89.

According to Fox News, Maria Mercader, a CBS News producer, passed away at 54 due to COVID-19.

Japanese comedian Ken Shimura, who had been hospitalised after being infected with the coronavirus, died late on Sunday, becoming the first Japanese celebrity to die of the virus, reported www.straitstimes.com. Shimura, 70, one of Japan’s best-known comedians with a career dating back to the early 1970s, reportedly had lung-cancer surgery in 2016. He developed a fever and respiratory problems on March 19 and was hospitalised, media said.

NBA star Kevin Durant and three other players on the Brooklyn Nets tested positive for the coronavirus. Prior to their diagnosis, they played the Los Angeles Lakers on March 10 before the NBA canceled their 2019-2020 season.

The game between the Utah Jazz and the Oklahoma City Thunder was postponed on March 11 after the Jazz’s center Rudy Gobert tested positive for the coronavirus, as reported by ESPN and quoted by insider.com. The 27-year-old athlete was reportedly in Oklahoma City but wasn’t present at the arena for the game. Now, both teams were quarantined in Chesapeake Energy Arena. Gobert was followed by his teammate, Donovan Mitchell, the second one to be diagnosed with COVID-19.

Christian Wood, a 24-year old center on the Detroit Pistons, was another NBA player to test positive for the novel coronavirus, as reported by The Athletic’s Shams Charania and also quoted by insider.com. Charania reported that Wood has shown no symptoms and “is doing well.”

NBA side Brooklyn Nets announced that 4 of its players were tested positive with COVID-19.

Another football club, Italian side Sampdoria, announced that 5 players and the team doctor have contracted the virus.

Marouane Fellaini, the former Manchester United footballer, currently playing in the Chinese Super League, announced on Instagram that he has been tested positive with Coronavirus.