Brunei approves death by stoning for gay sex and adultery 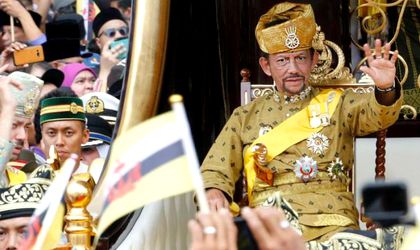 New Islamic criminal laws that punish gay sex and adultery by stoning offenders to death, have triggered an outcry from countries, rights groups and celebrities far beyond the tiny Southeast Asian nation’s shores.

The penalties were provided for under new sections of Brunei’s Shariah Penal Code. Sultan Hassanal Bolkiah instituted the code in 2014 to bolster the influence of Islam in the oil-rich monarchy of around 430,000 people, two-thirds of whom are Muslim.

Even before 2014, homosexuality was already punishable in Brunei by a jail term of up to 10 years. The first stage of the Shariah Penal Code included fines or jail for offenses such as pregnancy out of wedlock or failing to pray on Fridays.

But under the new laws — which apply to children and foreigners, even if they are not Muslim — those found guilty of gay sex could be stoned to death or whipped. Adulterers risk death by stoning too, while thieves face amputation of a right hand on their first offense and a left foot on their second.

“Living in Brunei, we already knew that our sexual identity is taboo and should not be expressed. We already felt belittled before the law came to place,” said a 23-year-old member of the LGBTQ community who wanted to be identified only as Kun out of fear of reprisal from the authorities.

“Now with it, we feel even smaller and the ones who could potentially oppress us have more opportunity to harass us to say and do what they want,” he said.

Celebrities including George Clooney, Elton John and Ellen DeGeneres have voiced opposition to the new laws, and have rallied a boycott of nine hotels in the U.S. and Europe with ties to Hassanal, who is still sultan.