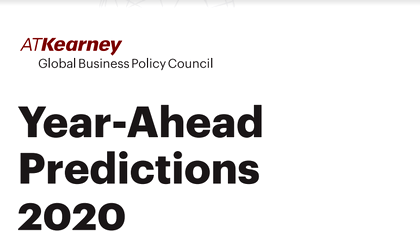 A.T. Kearney Global Business Policy Council released its Year-Ahead Predicitions 2020, 10 significant trends and events that will shape the coming year. Looking at demography, economy, environment, geopolitics, governance, resources and technology, the study reveals possible near-term developments to which businesses should pay close attention to and prepare accordingly. It is the fourth consecutive year in which A.T. Kearney releases such predictions, last year 6 of the 10 predictions ranking as 100% correct, 3 as 75% correct and 1 as 50% correct, according to this year’s assessment by the Council. Let’s have a look at the 2020 predictions:

Generational wars will heat up as battle lines are drawn.

A wave of water crises will spur innovation.

Floods, water scarcity, and unclean drinking water, are becoming real threats for more than a third of the world’s population. This should spur governments to pass laws and introduce campaigns such as Cape Town’s Water Day Zero, in order to tackle these crises. Also, a string of innovative start-ups might emerge as the private sector will look to capitalize on these urgent needs.

The evolution of cities will accelerate to meet infrastructure and climate challenges.

Housing shortages, food insecurity, poor transportation systems, and pollution are only a few pressing issues for cities around the world. All these problems are closely related with two main problems: inequality and climate change. Also, the rapid expansion of urban hubs is resulting in a loss of farmland. Governments and the private sector should start working together in order to combat inequality and climate change.

A new disaster economy will emerge as catastrophes become more frequent and severe.

Start-ups have already started to sprung up as natural disaster relief services. This will continue in 2020 as catastrophes, both natural and man-made, are inevitable – resulting in a new disaster relief sector in the global economy. International organizations will start relying on these private entities to offer relief to affected areas. New relief and prevention technologies will be deployed, as more and more investments will be allocated by start-ups and established companies alike.

25% of the global population follows the Muslim faith and this represents a huge portion of the global consumer market. Muslims have spent an estimated USD 2.1 trillion in 2017 alone, so there’s a big opportunity for businesses in the halal market. Along with food, which represents 62% of the total halal market, there are a few other fast growing sectors for halal products and services such as: fashion, media and recreation, travel, pharma and cosmetics. In 2020 the halal market is expected to exceed USD 2.5 trillion.

The United States will encounter challenges in the race to 5G.

China has announced its intention to make 5G a priority, with Huawei and ZTE already releasing 5G compatible products in the Chinese market. Other Asian countries such as South Korea, Japan or Singapore, and the EU are also in the race for 5G deployment. This will exacerbate the competition, as US based companies will face new challenges in the run for 5G.

Countries all over the world will adopt new data privacy laws in 2020 as companies face more and more scrutiny from both the public and politicians. The EU’s GDPR will become the standard template for such laws and companies worldwide will encounter more pressure to ensure compliance with the new regulations.

Northeast Asia will become an even more profound geopolitical hotspot.

While not currently a full-fledged hotbed like the Middle-East or Latin America, Northeast Asia is surely starting to look like one, with Japan and South Korea currently embroiled in a trade spat, China and Russia unveiling their new hyper-sonic weapons, North Korea’s reveal of a new submarine-capable missile and the massive protests in Hong Kong and Taiwan. Tensions will only escalate in 2020, with tensions between Beijing, Hong Kong and Taipei rising each day, just like the Japan-South Korea bitterness, or the North Korean ambitions.

US dollar appreciation will continue.

The USD has remained strong in 2019, despite interest rate cuts by the Federal Reserve. It will remain strong throughout 2020, potentially even gaining momentum against other major currencies.

Commercial and national interests will collide in a more crowded outer space.

Just like the exploration of our own planet in previous centuries, when state organized expeditions paved the way for private venture, with the two ultimately clashing each other, space exploration will see a heightened competition between national and private interests. Regulatory issues for outer space will become a main talking point at multilateral gatherings, while more countries and private companies prepare for their own space missions. Most likely efforts to regulate space exploration will be fruitless in 2020, due to rising geopolitical tensions.