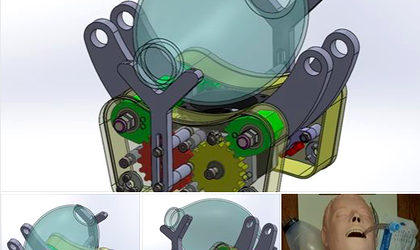 More and more companies around the world are changing their production lines in order to help out with the creation of ventilators, which are so much needed all over the globe due to the high number of coronavirus infections. The initiative group VentilaTM from Timisoara is working on a prototype of ventilators, made with 3D printed components.

The entire progress of their attempt can be seen on their Facebook page, VentilaTM. Short time ago, one of the team members announced their four prototype enters into production, after improving their work up until the doctors approved the mechanism.

According to www.start-up.ro, the project was initiated by Radu Ticiu, and a design team made up of specialists from Symme3D, led by Călin Brandabur (the Timisoara startup has created  3 years ago a 3D bio-printer that can print live tissue). The prototyped versions of the ventilator were tested with doctors from the “Pius Branzeu” Center of UMFT by spirometry methods but also on animals from the biobase of the center.

Same source mentions that The Symme3D founder stated that the production price of the device will not exceed EUR 200 euros, “and we will offer them free of charge with the help of several foundations including eMAG, BMW and many more (the list is very long) in hospitals in Romania and beyond”.

VentilaTM team is also looking for 3D printers owners who want to help out with this project. You can notice them using this form.

Moreover, up until now, in Timisoara, the team behind VentilaTM has developed a separation flow and decontamination area for medical personnel entering and leaving the patient care section of the ICU section of the Orthopedics department of the County Hospital, and also a quick wiring for the installation of a Centralized Patient Monitoring System in the same section.