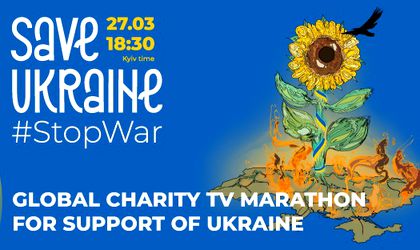 An International Charity Concert-Marathon aimed at supporting Ukraine and named Save Ukraine – #StopWar will be happening on the basis of TVP, a Polish TV channel, on Sunday, 27 March, at 17:30 CET (18:30 Kiev time) and will take place in Warsaw.

Among the key messages of the project are #StopWarInUkraine, #StandWithUkraine. Musicians, artists, civic activists, thought leaders, actors, athletes, volunteers from around the world will be supporting Ukraine during the 2-hour broadcasting, which will be rebroadcasted by the TV channels from about 20 countries in Europe and the world, as well as by streaming platforms and social networks. At the same time, funds to address humanitarian issues caused by the russian military invasion of Ukraine will be raised before, during and after the broadcasting.

It will also be possible to watch the broadcasting on the 1+1 YouTube channel and on 1+1 International, ICTV Ukraine, Inter+, Ukraine24 and others for the viewers all over the world.

The hosts of the event include Ukraine’s Timur Miroshnychenko and Masha Efrosinina.

The world-famous bands and artists such as Imagine Dragons, Nothing But Thieves, Fatboy Slim, Craig David, the Eurovision winners Salvador Sobral and Netta, and others are also among the invited guests to address a multimillion audience. The Ukrainian artists Dakha Brakha, Ruslana, THE HARDKISS, Jamala, Go_A, MONATIK, Alyona Alyona and others will participate in the telethon too.

In addition, for the occasion of the event, there are several fan zones to be organized in many cities globally in order to watch the telethon.

“The entire media community of Ukraine is focused on several crucial tasks – to convey a message that Ukraine is a shield from Russia for the whole civilized world now, and that we require prompt support. Ukraine is in huge need of help given the impending humanitarian crisis. Thus, we are talking about it out loud, we will keep talking about it in the future. [Talking] with the help of journalism, with the help of music, with the help of hundreds of thousands of people united all over the world,” – Yaroslav Pakholchuk, CEO at 1+1 media and co-owner at Atlas Festival says.

“The war destroys our cities, but it will never destroy our will and desire to live in a free country. National resistance has united Ukrainians and the entire democratic world in a common goal – protect innocent people. Military, volunteers, doctors, civilians who host migrants in their homes or march with Ukrainian flags in temporarily occupied cities, our technicians who even work in danger to set reconnection – all of us are heroes. We need much stronger support from the Western partners and the entire civilized world to finally win. Kyivstar will call for this in all possible ways – by supporting such fundraising concerts, working with the media and with our partners globally,” –  Tetiana Lukynyuk, B2C Director at Kyivstar says.

The graphic symbol of the telethon, which serves as a foundation for all its visual communication, is a sunflower created by Daniel Skrypnyk, a Ukrainian artist. The organizers of the event say that such collaboration can reach out to a larger audience as Daniel’s works are admired by people in many countries all over the world.

“Now, a sunflower symbolizes the whole of Ukraine. I’ve included personal symbols and emotions into it. The sunflower is an observer of various events happening around. It is a sensor of emotions. It visualizes everyone who has encountered side views. The sunflower has been growing in various aspects, and, right now, the sunflower has opened up in this most terrible and emotional situation. It asks to be noticed by the whole world being the one who is looking at Ukraine, feeling every Ukrainian. It asks for the light,” –  the artist Daniel Skripnik describes.

The organizers emphasize the fact that fundraising is to be implemented with the use of the official accounts of the National Bank of Ukraine and Ministry of Social Policy of Ukraine. The funds will go to meet food needs and to accommodate refugees and citizens who left their homes due to hostilities, to provide them with clothing and footwear, medicines and medical equipment; to provide the population with some basic necessities, one-time financial assistance, to meet other priority human needs, etc.

28 million users responded to the Save Ukraine – #StopWar telemarathon