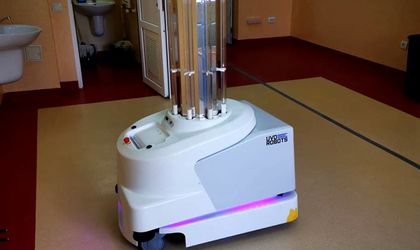 “On 19.03.2020, Bucharest Robots and Asociatia Suport made available to the National Institute of Infectious Diseases “Professor Doctor Matei Balș” an autonomous disinfection robot with UVC light for disinfecting large and crowded spaces that are very difficult to disinfect with traditional methods”, informed the State Department of Emergencies.

According to them, the UVD Robot technology is effective in fighting bacteria, viruses, fungi and other pathogens.
The robot that uses the UVC light spectrum is completely autonomous, works without human intervention and can disinfect several salons or operating rooms alone, having a much higher productivity and thus protecting the medical staff in hospitals.

The solution developed in Denmark was also chosen by China for disinfection, already ordering over 200 pieces, but also in hospitals in Taiwan, Italy, United Kingdom, Denmark, Japan, United Arab Emirates and others.