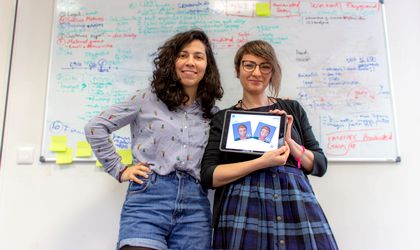 A Romanian entrepreneur turned her doctoral thesis in computer science at the University of Grenoble Alpes in France into a startup that developed an innovative technology with a real impact on the lives of those facing difficulties in social interactions, such as children with autism. After two years of testing in France, the Emoface Play & Learn Emotions app which allows users to interact with 3D avatars capable of expressing emotions in a social context is available in Romania starting April.

“The concept of the Emoface app was created with the help of my partner, Mayra Lima, UI / UX designer, whose sister is autistic and who knows the daily routine and specific needs of families with neuroatypical children. I was initially inspired by a study conducted by psychology researcher Simon Baron-Cohen, who used videos with people expressing emotions to train emotion recognition for adults with autism. I realized that the same way of learning could be more effective if it used easily controllable visual content that could be adapted to the users’ needs. We presented a simple prototype for an emotion recognition test using 3D animations generated during the studies and we received positive feedback from parents and doctors who propose such therapies”, says Adela Bărbulescu, computer researcher and Emoface founder.

The main beneficiaries of Emoface are therapists and patients who train their social skills. In the long run, users will become more autonomous, their communication will improve and they will be able to manage their emotions better, especially in moments of frustration and annoyance. Also, the progress through the app, using seamless interaction, leads to better self-confidence which, in turn, leads to better mental health and improved social inclusion.

“To teach children a new emotion, specialists usually use icons, printed images or photos showing people who express joy, for example, or fear, but there is a gap with what happens in real life, where everything is very fast and there is a lot of information to process. Therefore, professionals need dynamic, controllable materials with complex content, which will allow them to simulate what happens in real life. Emoface responds to this need through playful activities that allow interaction with 3D avatars. We are practically offering a new, stimulating work methodology, which basically uses avatars piloted by artificial intelligence to generate facial gestures and expressions so that the interaction is as natural as possible”, the Emoface’s founder explains.

The first developed app contains over 150 exercises, and all the content of 3D animations with expressive avatars, which reproduce facial expressions, is generated randomly, which prevents memorizing answers in tests used to recognize emotions, for example. The platform was financially supported by Emoface’s team members, but also through incubation programs such as SATT Linksium (2017-2019), foundations and national development programs (BPIFrance) or Innovators for Children (2020-2021). The estimated investment required for the development of the next Emoface apps by 2023 exceeds half a million euros. For now, the first app, which works on basic emotions, has 600 beta users in 5 countries and is set to be launched in Romanian at the beginning of April.

Emoface is one of the five projects that are part of the second edition of the Innovators for Children accelerator, a program developed by Impact Hub Bucharest, in partnership with Impact Hub Basel and Fondation Botnar, through which startups and NGOs receive mentoring, resources and funding to develop tech solutions that contribute to children’s wellbeing.