Romania’s waters and their shores should not look like landfills 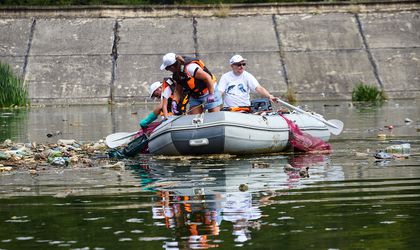 The Romanian rivers and riverbanks shouldn’t have to look like landfills. The country needs urgent measures to be taken by the local and central authorities in order to stop the ecological disaster that the waste disposal is causing to the rivers and waters of Romania. A real partnership between the public and the private sector, as well as the civil society is also necessary to identify and implement the best solutions to prevent and fight the water pollution.

Act for Tomorrow, with the support of Kaufland Romania have organized a river cleanup event within the “Act for water” program, which took place on Saturday, the 29th August 2020. Over 75 volunteers from Vâlcea, Sibiu and Argeș counties have mobilized to clean up the waste around the Olt riverbank.  The main conclusions reached after the cleaning event are the following:

The volunteers have hauled 1500 kg of trash in over 200 bags during five hours, not just from the Olt riverbanks, but as well as from other waters of the basin. The volunteers have removed the litter with the help of over 20 pneumatic boats and kayaks in one of the most affected areas of the Olt river, where tons of PETs and other waste flows on the water surface. A lot of it represents abandoned litter by either tourists or fishermen, but it is also brought by the waters. PETs, lids, bags of chips and seeds, casseroles, disposable cutlery, building materials, shoes, cigarette butts, dead animals, all of them can be found on the riverbanks of Romania.

The situation met on Saturday in the gorge of Olt is outrageous, even if it is far from being a singular event met on our waters. This is why we urge the public local and central authorities to treat the water pollution issue with priority and to adopt the necessary measures for solving it. One of the first steps that needs to be taken is for the local authorities to implement the legal framework for assuring the local infrastructure of collective waste management, both in the urban and rural sectors. Another point would be to create education campaigns for citizens, so that the waste pollution can be prevented. At central institutional level we consider necessary to organize a group of representatives reuniting public institutions, the private sector and the civil society, who are able to identify the best solutions for tackling this problem.

We remind that at the beginning of July 2020, the president of Hungary, János Áder, has sent a letter to the president of Romania, Klaus Iohannis, through which he urged Romania to adopt immediate measures to prevent the water pollution problem of our country, in the context in which significant amounts of waste are flowing in the waters of Someș and Tisa rivers.

The abandoned waste found in the waterways is endangering the lives of the fishes, but also our own health. They resist a long time after the death of wild animals and humans. One dose of aluminum lasts 200 years in nature, a PET lasts on the water surface for around 450 years, one abandoned bag of chips has a bigger longevity than some humans- 75 years and a bottle up to a million years, which means that it remains there forever. According to most studies of specialty, one person is ingesting at least 50.000 of particles of plastic and inhales a similar quantity over a year’s time and during a week 5 grams of plastic end up in the human body- the equivalent of a credit card. The microplastics pollution is especially generated by the plastic waste disintegration and it is omnipresent around the planet. The scientists have found microplastic in every medium: in the air, soil, rivers and in the deepest oceans of our world, but also in the tap water, bottled water, in seafood, beer and in the human fecal samples, proof that we ingest plastic.

“The cleanup of the Olt river held on Saturday has showed us once again that the problem of the waste water pollution can no longer be ignored. Romania needs a set of education programs for the citizens, adequate waste collection infrastructure and national programs for collecting and recovering  the waste from our waters. Our country risks new pandemics if we don’t protect the waters from our territory”, said Andrei Coșuleanu, the president of Act for Tomorrow.

Through the 2020 edition of the program “Act for water”, under the “Stop wastes from waters” umbrella we have proposed to mobilize the communities to get involved in the prevention of water pollution in Romania and to bring this subject on the public agenda, so that specific measures will get adopted to handle this problem which endangers the lives of aquatic animals, as well as our own.

The ecological A.P.A program is part of Reset Plastic- the Integrated International Anti-plastic Strategy of the Schwarz Group, which includes Kaufland Romania.

The Schwarz Group, to which Kaufland Romania belongs to, is one of the biggest international commercial societies which knows and assumes its responsibilities towards the environment at global level. It has elaborated an integrated international strategy through REset Plastic, which includes five areas of action: to reduce the quantity of plastics from packagings, to rethink their design, to recycle and remove completely the plastic and to innovate and educate in this field. The vision “Less plastic- closed circuits” becomes a reality. For more information about the REset Plastic please visit kaufland.ro/resetplastic.