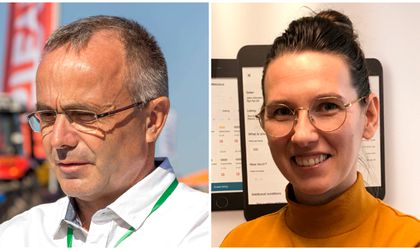 Romania has farmers who are shouldering the task of creating a better climate context for the future generations by adapting their tillage and cultivation techniques and making the transition to conservation agriculture. Commoditrader, the digital trading platform for agricultural commodities, supports farmers in the transition process, rewarding them by selling carbon certificates on the international market. Farmers can earn an additional 45-105 euro/ha/year, by capturing in the soil 3-7 tons of CO2e/ha/year, while implementing practices of conservation agriculture.

Arnaud Perrein, vice-president of the Romanian Corn Producers Association with 28 years’ experience in the Romanian agriculture industry, cultivates 4,000 ha in Ialomița County, at Sopema Farm. For several years, he has adopted a set of measures that contribute to the improvement of his cultivated soil, so that it is more productive and profitable.

“Currently we only plow 200 ha of the 4,000 we cultivate. We decided to make the transition from traditional to conservation agriculture primarily out of personal beliefs, because we want to leave something good behind for future generations and then because, personally, I am open to experimenting, losing or gaining through agriculture I practice”, said Arnaud Perrein.

The farmer says that on the surfaces he works he has hard and clay soil, worked deep, which forced him to do less tillage. However, he also has surfaces with very light, sandy lands, where he encounters problems due to wind erosion. This forced him to change the way he is farming, adopting new techniques.

“We do conservation agriculture, we evolve on all sides – spraying, paying attention to the fertilizers used and the cultivated varieties, we leave the land as little uncovered between two crops and then we get a complete result of several measures taken. We expect these actions to lead to positive results in the medium and long term. Every year we have better, and better productions and we are even better, we earn more per hectare. We hope that the green crops we have will help us in time to develop the qualities of the soil and to cultivate these lands more easily.”

Farmers get real benefits from the transition to conservation agriculture

The transition to conservation agriculture favors biodiversity, generating a richer biological activity. Moreover, by adopting this type of agriculture, greenhouse gases and CO2e can be stored, and this can be quantified, verified and transformed into carbon certificates that can bring financial benefits to farmers.

Globally, farmers are becoming aware of the impact of their activity on the environment, through CO2 emissions, influencing soil quality and thus the crops obtained. More and more of them are starting to adopt conservation agriculture, changing their traditional practices with more sustainable ones.

Private initiatives have begun to emerge to remunerate and stimulate those eager to get involved and make a difference for future generations. Through carbon certificate issuance programs, farmers get an additional crop at the end of the season, receiving payment for the certificates obtained.

One such program is CommodiCarbon, launched a few weeks ago by Commoditrader, the digital trading platform for agricultural commodities, through which farmers can obtain additional financial support.

“We are aware that our program brings novelties in terms of agricultural techniques that farmers have practiced for years. Our goal is to encourage more sustainable and efficient agricultural production for farmers. Our initiative is private and voluntary, we issue voluntary carbon certificates to farmers who enroll in the program and who are eager to convert to conservation agriculture. Subsequently, we financially reward them for their efforts in selling these certificates to international companies that want to reduce emissions globally. The demand for carbon certificates is constantly growing worldwide and is becoming increasingly important in combating climate change”, says Alexandra Suciu Sørensen, Commoditrader Market Development Romania.

Arnaud Perrein, who has been practicing conservation agriculture for several years, says he does it out of conviction and he experiments a lot.

“I follow my faith even if I can lose money to experiment on a certain culture or technology. We tried to calculate how much CO2 we use and how much CO2 we capture so as to improve this ratio. We are trying to have the basics, calculation protocols, because we will need benchmarks to be able to compensate each ton of carbon consumed, not only by the agricultural production obtained, but also by methods such as the digester and methane production, photovoltaics etc. That is at least the goal I set for myself.

Furthermore, Commoditrader helps us to grow towards a more consistent absorption of carbon and GHG in the soil in order to improve it over time. The good part is that we can capitalize on this through carbon certificates. It is a difficult road, the landmarks in France or Denmark may not be the best adapted here in the south of Romania. If we do nothing, we will not gain experience in this field. We will have to work hard to find ways to capture more carbon and quantify it correctly and responsibly.”

Regarding the remuneration part, Arnaud Perrein appreciates that it is a good incentive for farmers.

“Through CommodiCarbon we can capture somewhere between 3-7 tons of CO2e/ha/year, meaning an additional gain of about 45-105 euro/ha each year, when the certificates are sold in the market. Of course, the earnings can vary from farm to farm, but it’s very good that there is a remuneration – it’s a start and it will help us, the farmers, to accelerate the steps towards a better knowledge of the soil we work and in at the same time to participate in reducing global warming.”

Commoditrader is organizing the first educational webinars of this year, on 19th and 21st of January, speaking about conservation agriculture concept, the technical conditions of practice, also challenges and benefits in the short and medium term will be explained. Information will also be provided on the CommodiCarbon program – the applicability of carbon certificates and the benefits to farmers. Farmers and all those interested in the subject can register at the e-mail address info@commoditrader.com.

Conservation agriculture in the context of European norms

Conservation agriculture, or carbon farming, has already been included among the main measures included in the Common Agricultural Policy (CAP), included in the European strategic plan to be defined by the end of 2021. It is also included in the strategy for the development of the sector, medium and long term agri-food, for the horizon 2020 – 2030, of the Ministry of Agriculture and Rural Development.

The European model of agriculture for the coming years aims at sustainable development and greater care for the environment. The Common Agricultural Policy maintains the first pillar of subsidies, but tries to bring attention to the integrated development of the rural economy and the protection of the environment, through the second pillar.

At present, the CAP does not make it a real obligation for the Member States of the European Union, but by the early implementation of sustainable practices, farmers can be financially rewarded for their efforts and involvement.