Romania: face to face with marine litter: A visually striking campaign and the first waste disposal infrastructure in the form of gigantic marine animals on the Black Sea coast 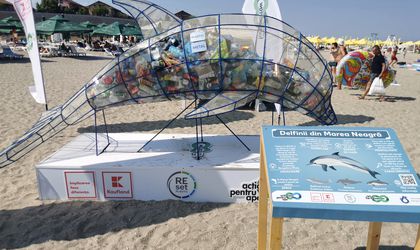 Every hour, each of the rivers flowing into the Black Sea brings between 6 and 50 pieces of litter into the sea and endanger the sea life. On average, around 85% of the litter found in the Black Sea is plastic. Of the most common types of litter that is brought into the Black Sea from rivers, around 20% are plastic bottles, while plastic bags and containers, two other key polluters, account for 10% and 9% respectively. 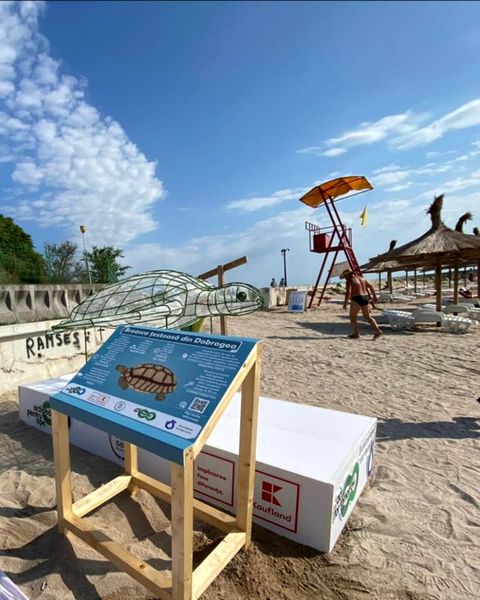 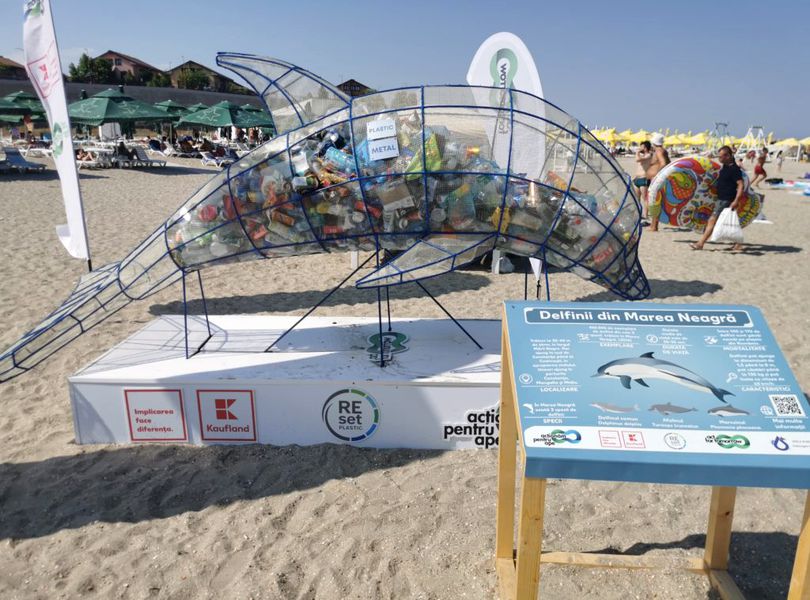 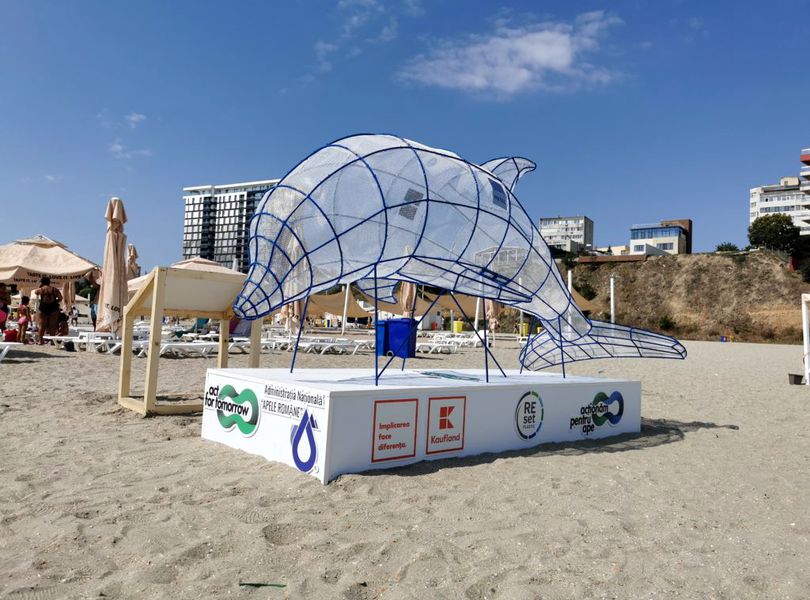 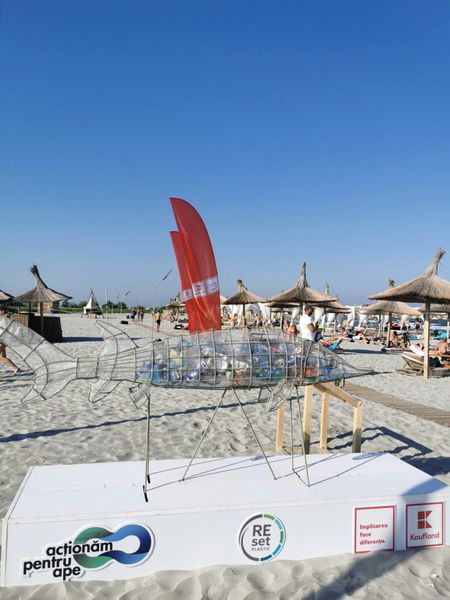 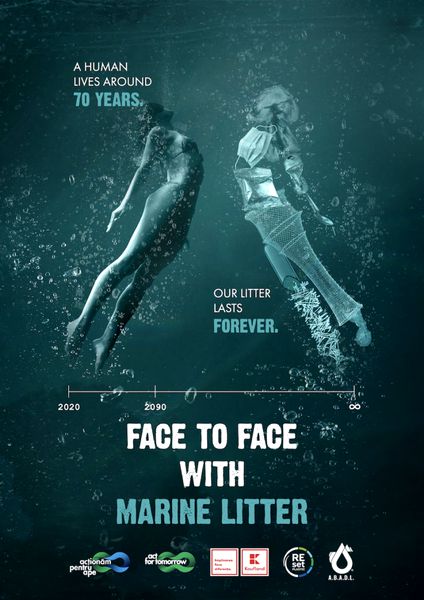 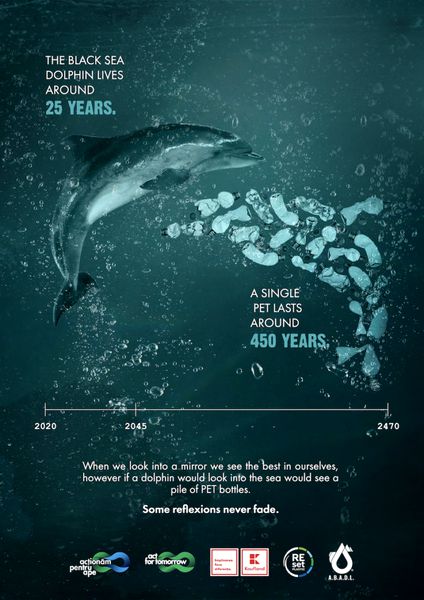 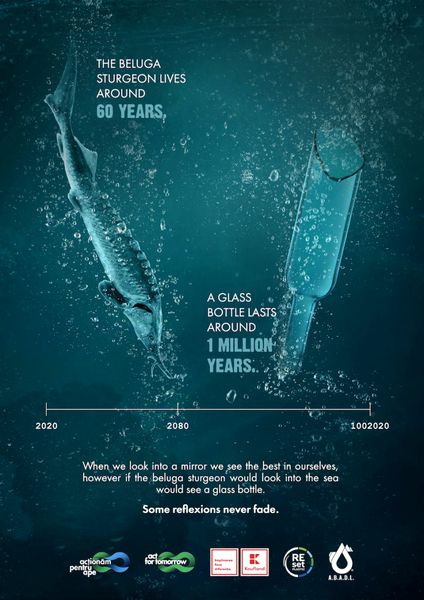 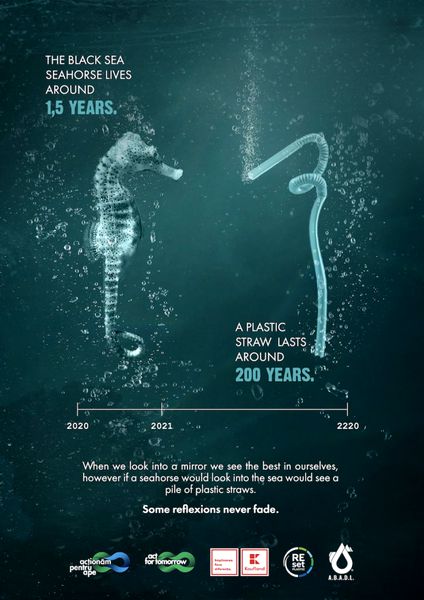 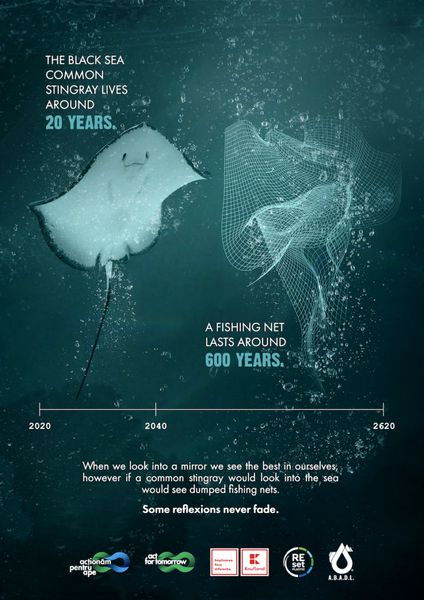 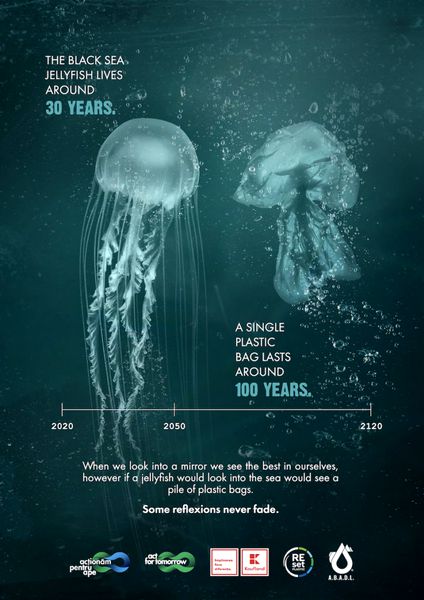 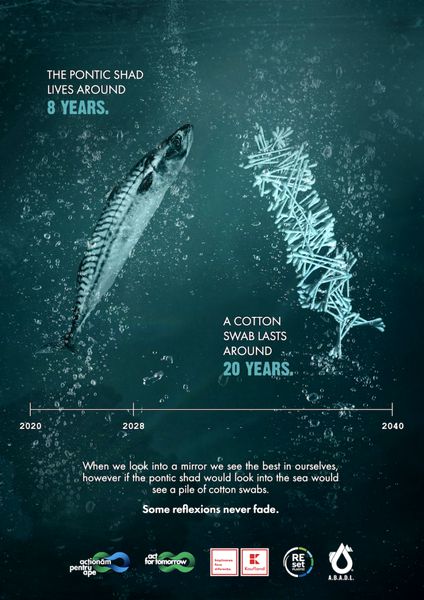 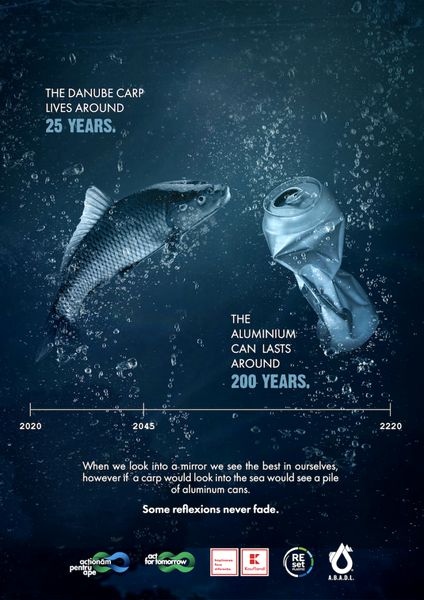 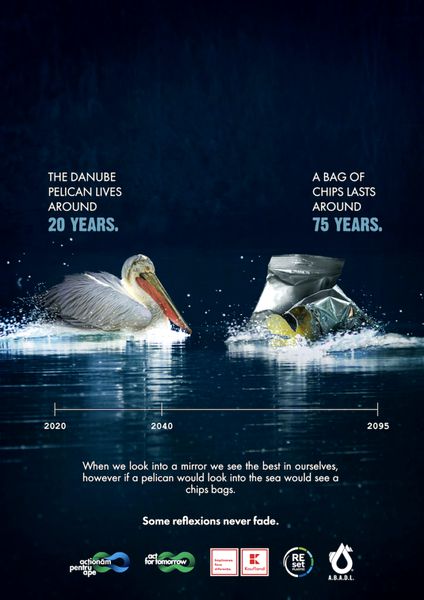 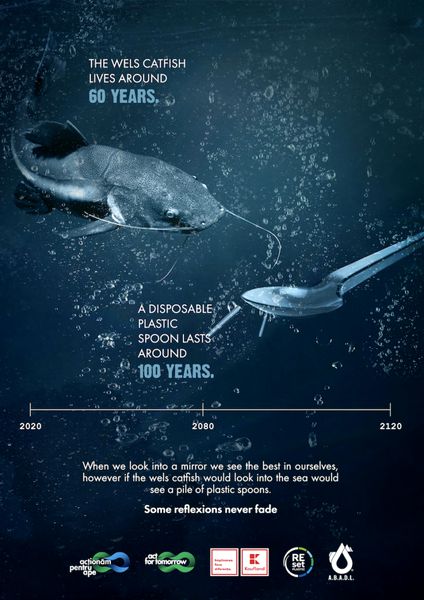 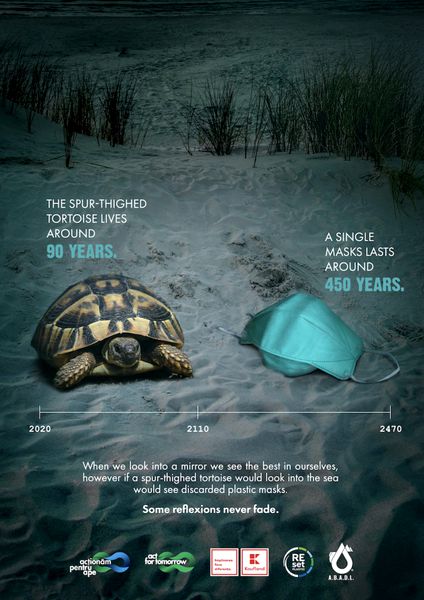 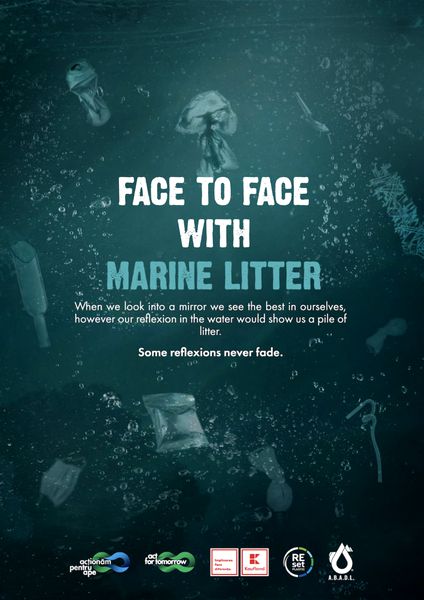 Act for Tomorrow (an environmental non-governmental organization from Romania) together with Kaufland Romania with the support of  The Dobrogea-Litoral Romanian Waters Association has launched the awareness campaign “Face to face with marine litter”.

Apart from running awareness-raising and education activities, Act for Tomorrow NGO initiatives are significant in terms of political awareness and action on water pollution issues and cleanup operations.

Romanians are put face to face with waste that threatens the lives of marine animals. Dolphins, seabirds, fish, crabs, and many other animals are dying and becoming sick because of this deadly environmental concern.

The campaign uses visually impactful images: mirrors the most important threatened and endangered species in the Black Sea, Danube, and Dobrogea, with the most encountered waste in Romanian waters.

The campaign consists of 11 visually impactful images that mirror the most important threatened and endangered species in the Black Sea, Danube, and Dobrogea, with the most encountered waste in Romanian waters. The posters will be part of a touring exhibition that will be displayed on multiple beaches and Kaufland stores to raise awareness about the impact of marine litter.

Also part of the “Face to face with marine litter” campaign, Romania has the first enormous animal shaped trash cans on most popular beaches, in hopes to also reduce the amount of plastic waste. These 4 giant structures represent the most known protected and endangered species in Romanian waters and are placed on three of the most important beaches of the Romanian resorts: Reyna Beach in Constanța, Nomad Beach in Năvodari, and Eminescu Beach in Mangalia.

The 4 gigantic systems representing two dolphins, a sturgeon and a turtle have the role to alert everyone of the impact that waste has on aquatic animals.

In the specially designed infrastructure only recyclable waste will be collected, plastic and metal waste such as soft drinks bottles and soda cans. These will then be sent to sorting stations, after which they will be recycled and turned into new products.

Through the „Act for Water” program the tourists are urged and made responsible to throw away their trash in specially equipped premises and not on the beaches. This approach increases the collection rate, offering a pleasant experience to both children and adults who can learn new basic information on environmental protection, in a nice environment, on the seashore.

The Black Sea coastline is also heavily polluted with plastic; 14% of the waste that contaminates its beaches consists of plastic bottle caps, 6% wrappers, 5% bottles, and 2% straws and stirrers. These findings result from marine litter monitoring carried out with support from the European Union.

Over 220 million tons of plastic are produced each year. Once discarded, plastics are weathered and eroded into very small fragments known as microplastics. These together with plastic pellets are already found in most beaches around the world.

Plastic debris causes the deaths of more than a million seabirds every year, as well as more than 100,000 marine mammals as per the United Nations.

“The Black Sea is one of Europe’s most important natural resources and, at the same time, the second most polluted sea. From the position of a European and Romanian company, we must protect it. Through the ReSet Plastic strategy, we are doing everything we can to reduce the amount of plastic, even by collecting and recycling, as the Act for Water program does.” Says Katharina Scheidereiter, CSR Manager Kaufland Romania.

“Through the Act for Water program, together with Kaufland Romania, we have planned to encourage people to change their behavior and attitude towards waste through creative and innovative approaches for Romania and to make them choose not to throw away trash on the beaches and in the water, but to collect selectively. On most Romanian beaches there is no collective selection infrastructure and there is a lack of information campaigns targeting tourists. We are convinced that through this new proposed approach we will have a real impact on all people, no matter their age and they will think twice before throwing trash out of the bins.” Adds Andrei Coșuleanu, Act for Tomorrow President.

The visual campaign and the waste disposal infrastructure are both launched as part of the „Act for Water– A.P.A” program, initiated by the Act for Tomorrow Association together with Kaufland Romania. The program is carried out with the support of The Dobrogea-Litoral Romanian Waters Association.

The 2020 edition of the APA program plans to mobilize communities, under the “Stop plastic waste in waters” umbrella, to prevent and fight plastic pollution of the Romanian waters and to bring up this subject on the public agenda.

Established in 2018, the REset Plastic strategy is the next big step towards a world without waste. The Schwarz Group is resolutely pursuing its sustainable path. As a global player, the group that owns the Lidl and Kaufland brands has an obligation to protect the environment. This makes the vision of “less plastic – closed cycles” a reality.