#RecyclingBreeze | A shield against waste. A new campaign against littering at the seaside 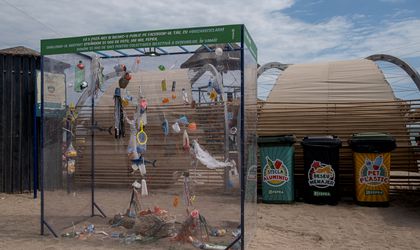 Each year, more than 33,000 individual pieces of waste are dumped by tourists on the beaches of the Romanian seaside, while every day, 4.2 tonnes of plastic waste are discharged into the Black Sea by the waters of the Danube. A new awareness campaign aims to gather as many pictures with the #BrizaRecilarii (#RecyclingBreeze) photo frame, in an attempt to end the waste problem on the Romanian beaches.

The #RecyclingBreeze campaign is organized by FEPRA International, together with Asociatia Planeta Verde (Green Planet Association) and Miscarea pentru Reciclare (The Movement for Recycling), and will run for a full month, between August 20 and September 20. Besides the Facebook photo frame available on the FEPRA Facebook page, the campaign also has a physical component, on the Amphora beach in Vama Veche, where an impressive “waste aquarium” was installed.

During the period of the campaign, the organizes will try to raise the waste issue into public discussion, by creating a Facebook photo frame. The goal is that by the end of the campaign, at least 35,000 people, as many as the number of waste discharged by tourists on the seaside, to use and share the frame. Each frame, the organizers say, will mean a new call for acknowledgement of the waste issue and a tribute for each piece of litter thrown on the Romanian beaches. As a manifest and encouragement for people to remember that the sea and beaches are taken over by waste, a phenomenon which must be stopped at all costs, FEPRA will donate 35,000 selective waste collection bags.

FEPRA representatives also shared some stats, according to which Romania has some of the most littered beaches in Europe, while in the Black Sea there’s two times more waste compared to other seas in Europe. Romania only reached a 13-14% recycling level, according to the same source, even though the target for this year was at 50%.

“All the waste thrown at random are the result of people’s inappropriate actions. We want to give waste a face, so that people will remember it and the responsibility they have, but more importantly, to think after reading the numbers, that waste is not a fictional character, but it’s born from our own actions. It’s a challenge we launch for every Romanian citizen, personalities and every day persons alike, who are aware of the importance of selective waste collection, and who, like us, want to stop the waste dumping phenomenon in places in which we visit to reconnect with nature. Because of the current pandemic context, we decided to organize this campaign mainly online. We consider that each photo can change mentalities and behaviors, and 35,000 photos, one for every piece of waste, will have a stronger echo. It’s a massive call to action, made with emotion and coming from the desire to change, because both us and the future generations deserve to live in a clean and healthy environment.” Says Sorina Banica, Marketing and Communications Director, FEPRA International.