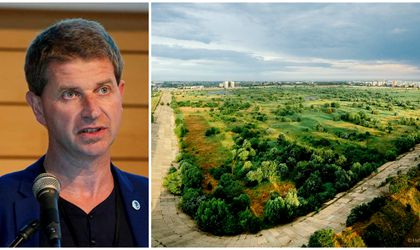 In a conversation about nature and the city, Ignace Schops, a Belgian environmentalist, will talk on May 18, in Bucharest, with the representatives of Parcul Natural Vacaresti Association about climate change and how urban parks can help out. Business Review already underlined the importance of the nature in the urban areas, in a conversation regarding sustainable living.

Ignace Schops is the Director of the Belgian NGO Regionaal Landschap Kempen en Maasland (RLKM), President of EUROPARC federation –  the largest network on natural heritage in Europe –  full member of the EU chapter of the Club of Rome and full member of the Rewilding Europe Circle. He was awarded with the Goldman Environmental Prize in 2008, better known as the Green Nobel Prize.

Since 2008 he was selected as Ashoka fellow, a world leading social entrepreneur. Due to his international work on biodiversity and social entrepreneurship he became an Honorary Doctor at the Hasselt University in 2011. In 2013 he became a member of the Climate Leadership Corps of Al Gore and later that year he was decorated as the “Commander of the Order of the Crown” by the Belgian King Filip.

Read also: #RisingCities: Sustainable Living to underline the importance of community and how the pandemic changed the needs of urban life

In June 2021, Brussel’s court of first instance found that the Belgian authorities’ failure to prevent the “detrimental” effects of climate change was in violation of its civil and human rights obligations, an initiative where Ignace Schops is one of the masterminds for the seven-year effort.

What new economic models can we use to curve the impact of climate change?

There are some good new models that can curve the impact such as:

At the country policy level: calculating the carbon impact and taxing it (polluter pays principle) – Canada is interesting to follow because they redistribute the collected taxes with a social correction.

At the global level: incorporation of the System of Environmental-Economic Accounting – Ecosystem Accounting (SEEA EA). Ecosystem accounting involves a connected framework to help organise data that relates to habitats and landscapes, measures ecosystem services, tracks changes in ecosystem assets and then links this information to human cultural, economic, social and political activity.

At the company level: companies become more and more aware they need to shift to climate neutrality because of the environmental impact and because the economic benefit rates are higher.

More and more global companies are taking action on climate change. How can we convince small entrepreneurs or local companies which don’t necessarily have an interest in climate change to configure their business in this direction?

The first step is to start the conversation with empathy for the problems they have. Often the ideas are built on perception. A dialogue based on science and translated to the local situation can help to give insight and give evidence of the entrepreneurial benefits. It is about translating climate change into a language they can understand and on equality. Every small business has the right to start the process towards sustainability.

How would you recommend framing climate change messages as an NGO? But for communicating with SMEs and entrepreneurs?

We need to change the climate before the climate changes us. We are all in this together, and we collectively need to find the answers for the future generations (and all living creatures living on our planet). This decade is decisive. So, as a start an open invitation to finding solutions. And be firm and fair in the way we move on. This means looking into the back planning of policies of companies and governments. If we agreed to become carbon neutral by 2050, what is the objective for 2030 and 2040 and work towards these goals …

The best solution for tackeling climater change is to invest the natural ecosystems, by restoring and enlarging the space for nature. We cannot survive – by far – with only technical solutions. Urban national parks have so much advantages: for the local economy, for the health of its inhabitants and visitors, to make visible what was unvisible. Investing one euro in natural ecosystems like urban national parks benefits the local economy by 10.

Which are the advantages and disadvantages of the way these parks transcend urban and remote boundaries?

We need to change the story of separation into (Re)connection. Nature starts at your flowering pot at home, not in protected areas. And we are part of it (we are nature!). We seem to have forgotten the advantages of our inner connection with nature. So with urban national parks, we cannot only focus on the border of the park but focus wider, urban areas included. Visitor facilities need to be developed in the city-centre, it is all part of the (Re)connection Model I developed (editor’s note: this model (Re)connects society with the natural heritage and is used in several countries in the world).

How can companies and entrepreneurs be involved in developing urban parks? Do you have any examples of successes and failures?

By starting the conversations.  In many similar projects, the local entrepreneurs increase their economic activities and benefits when authorities invested in developing urban parks.

How can authorities – both local and national, benefit more from an urban park? Which are the main arguments for convincing authorities to conserve, protect, and support this kind of natural area?

Simply said, we as conservationists need to translate biodiversity and nature into a language decision-makers understand. In essence, it is about love, love for life, love for each other and love for all species that exist. And be aware we need each other to survive. There is no business on a dead planet. Like I said, we are nature and we need to renew the concept of solidarity. That’s why I like the South African “Ubuntu” philosophy: “I am because we are”!