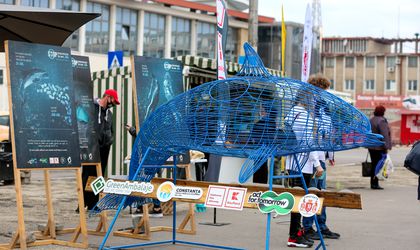 The “Swap plastic for a free ride” campaign, a unique initiative in Romania, through which residents and tourists are able to travel by public means of transport, paying for their ticket with PET bottles and aluminum cans, was launched on Friday, 21 May, in Constanța, the largest Romanian city located on the Black Sea coast.

The campaign was very well received by the public. 615 people participated in the pilot edition that took place on Friday. In just 10 hours, they brought a total of 220 kg of PET bottles and 15 kg of aluminum cans to the collection points situated in 5 bus stops.

Another unique aspect of the campaign is the separate waste collection infrastructure, in the shape of giant marine animals, representing well-known protected species from Romanian waters. The 4 giant systems, representing two dolphins, a sturgeon and a turtle, draw attention on the impact that waste has on aquatic animals. The campaign takes place at the Black Sea, which is the second most polluted sea in Europe. After the western part of the Mediterranean Sea, the Black Sea contains the highest density of man-made garbage that has reached the EU’s marine environment. Plastic makes up 90% of waste produced by humans and discovered in the marine environment. 85% of these are plastic bottles (PET) and disposable bags, both categories of objects representing two of the main marine pollutants

Citizens welcomed with great enthusiasm the opportunity of recycling at the collection points. On the day of the campaign’s launch, the collection infrastructure was filled with waste even before 12:00. This reiterated the need to implement an accessible waste collection system, but also showed the desire of the population to contribute to a cleaner and healthier environment. 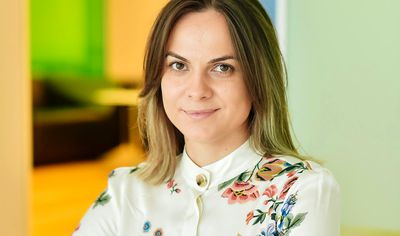 “Swap plastic for a free ride” is a campaign launched by Act for Tomorrow Association and Constanța City Hall, with the support of the Federation of Non-Governmental Youth Organizations from Constanta, Kaufland Romania, Green Ambalaje, and the Ministry of the Environment.

The initiative is a first for Romania, having two main objectives: it encourages the use of public transport and it promotes waste collection and recycling which, in addition to being transformed into new resources, also facilitates access to public transport, in this context. At the same time, the campaign has a social objective, that of making public transport more accessible. Every passenger who chooses to travel by public transport, at the expense of personal car, consumes 114 grams less carbon dioxide per kilometer traveled. Thus, last Friday the carbon footprint of the 615 people who participated in the campaign decreased by over 70 kg per km traveled.

Similar campaigns were carried out in other major cities around the world, such as Rome (Italy), Istanbul (Turkey), Beijing (China) and Surabaya (Indonesia) and registered extremely good results. For example, in Istanbul, in the first year of the campaign, 4.1 million PET bottles were collected, the equivalent of 75,000 kg of plastic.

The initiative enjoyed many positive echoes at national level, and the organizers, together with the private partners of the campaign, are looking for solutions to replicate it in as many cities across the country.

The campaign “Swap plastic for a free ride”, through which the inhabitants of Constanța can travel by public transport, paying in exchange for their ticket with waste, will continue every Friday of the entire month of June. Those willing to participate will have to bring 5 plastic bottles or aluminum cans and in return they will receive a bus ticket, with two trips, available on any transport line. The campaign will take place at the collection points in the form of giant marine animals, located in 5 of the busiest bus stations in Constanța.

In addition, residents will be able to collect waste every day of the week, at the recycling machines in the parking lots of all Kaufland stores located in Constanța. In exchange for the 5 collected waste items (PET bottles, aluminum cans, glass) they will receive a voucher, with which they can present themselves every Friday until the end of June at the above-mentioned stations, in order to receive a free bus ticket. Also, the vouchers issued by the recycling machines from the Kaufland stores in Constanța will offer discounts on certain products according to the weekly promotions.

Following the evaluation of the results from the first month of the campaign, the organizers will decide on whether they will be expanding it in Constanța during the entire summer season. Both for the pilot edition and for the next editions, the full cost of the tickets is borne by the private partners of the action, Kaufland Romania and Green Ambalaje. All PET bottles collected during the campaign will be sent to Green Ambalaje recycling plants, where they will be transformed into new resources.

The “Swap plastic for a free ride” campaign is part of the “Act for Water” programme, developed by Act for Tomorrow Association and Kaufland Romania, in partnership with Constanța City Hall, in which extensive water protection actions have been carried out since 2019, at the level of both the municipality and other resorts on the coast. In 2020, the “Act for Water” Program won the first place, in the middle category, within the Romanian PR Awards, the most important PR competition in Romania.

The president of the Act for Tomorrow Association, Andrei Coșuleanu: The success of the pilot edition of the “Swap plastic for a free ride” campaign makes us happy and motivates us to look for solutions to continue this project, to develop it and to replicate it. The campaign enjoyed positive feedback from citizens, local and national public authorities, as well as from the private sector. We strongly believe that this campaign is a real solution to the acute environmental problems that Romanian cities currently have and we hope to find support for this campaign to be launched in as many cities as possible throughout the country.

The mayor of Constanța, Vergil Chițac: The positive reactions that we received from the people of Constanța for this campaign determine us to continue to support this unique approach in Romania. Constanța needs such initiatives, which have a real positive impact on the environment, while involving citizens and transforming them into active participants in the community life. We want to build together a greener and cleaner city, which we can all enjoy.