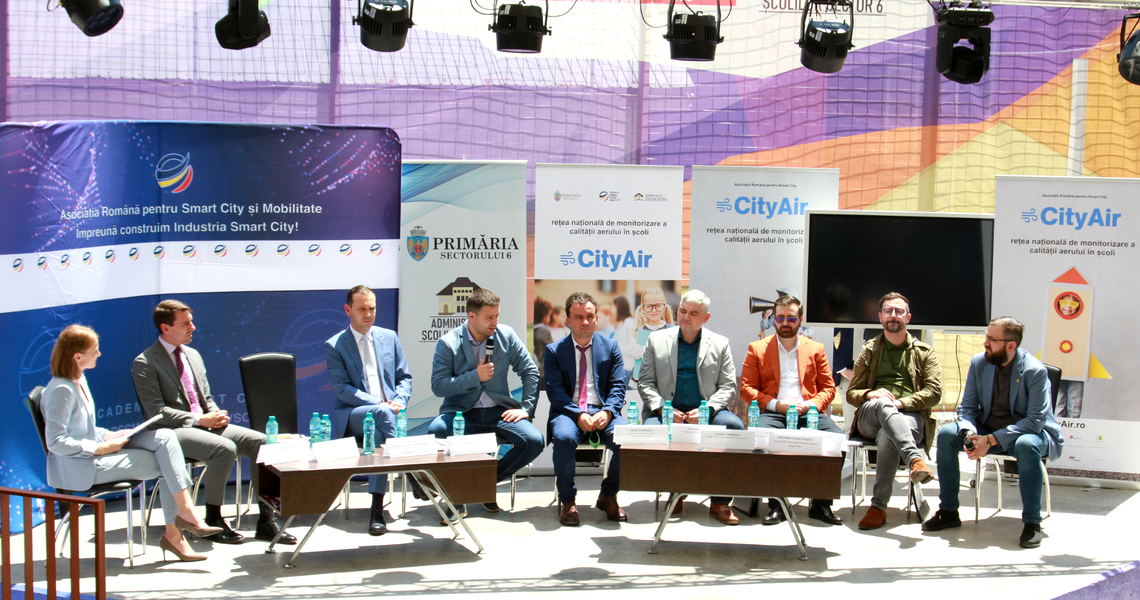 The pilot project started in Bucharest on June 8, when 60 stations that measure pollution were installed in 30 schools, inside and outside the buildings.

We are in the phase where we test stations, we test technologies, we go into the middle of the community and learn together. We cannot talk about urban development if we do not understand what problems pollution brings. Just as when we feel bad, we go to the doctor so we can get a diagnosis and do investigations, in the same way we have to act when it comes to pollution. That is why City Air is an infrastructure  available for central and local authorities, civil society and all those interested in finding solutions. Only in a collaborative environment we can make this platform work and achieve its purpose. — Eduard Dumitrașcu, president of The Romanian Association for Smart City 600.000 children die every year due to air pollution

Why is it important to measure air quality in schools? Air pollution is a harmful phenomenon, which affects vulnerable groups, children and the elderly. According to the World Health Organization, 600,000 children die each year globally from indoor and outdoor pollution.  Our goal is to see the real image in schools and to create the necessary infrastructure to show an up-to-date x-ray of the situation.

Unfortunately, pollution kills us and kills those who come after us. It is a silent phenomenon, because it does not hurt, does not create any kind of panic, but acts tacitly on our health. Air pollution causes the appearance of chronic lung diseases, which affect our quality of life and work capacity. It increases the risk of cancer in all areas, and if we talk about future generations, pollution increases the susceptibility of children to develop respiratory allergies, allergies that mean a predisposition to develop chronic pathologies in adulthood. — Radu Țincu, ICU specialist at Floreasca Hospital

Our data is open and can be accessed by everyone on the map.cityair.ro platform. Air quality is described for the public with the indicators: ”good”, ”average”, ”bad”, so that users can easily understand the data collected by the stations. The complete data is stored and, periodically, reports will be issued showing how the air quality has evolved over a longer period of time. We searched for a solution that is used in the most important markets in the world and in Europe, which has a higher accuracy and which completes the data of the stations used by the state institutions. We feel the need to get involved, to invest, because we want to make people aware of how important this subject is. — Cristian Croitor, managing Director Claritech

The map.cityair.ro platform is composed of several modules: the security module, the sensor data collection module and the interactive map module. We have implemented systems that prevent data corruption. We are also planning a mobile version, which will allow monitoring through a notification system of all schools. — Andrei Zamfirescu, Head of Development TNT Computers

Based on these data, we want to collaborate with local and central authorities, civil society, parents, teachers and students, in order to create a set of recommendations that can be implemented in order to reduce pollution.

The sensors help us to be aware of the problem and then together with the Local Police, we have to intervene. If we find, for example, a local source of pollution, such as a construction site, we will suspend the activity until the necessary measures are taken. In case a boulevard is very crowded, the Capital City Hall is supposed to close the traffic on that artery. These smart city elements need to help prioritize decisions and budgets. — Ciprian Ciucu – Mayor of 6th Sector in Bucharest

We hope that the City Air network, the first program for monitoring school air quality will be as extensive as possible. We will also expand the national network in Bucharest with 3 more monitoring stations by the end of the year and we will take 24 more analyzers for PM10. – George Gârbacea, President of National Agency for Environmental Protection

I have also installed a sensor in front of a school in Bucharest, because the parents’ habit was to keep the engine running for half an hour, when they came to pick up their kids, which produced an unbearable smell. When we have a source of gas or smoke in a block of flats, the pollution stays for hours. Maybe this is something that we can change, to explain to parents why they should stop doing this. I believe that City Air will explain the phenomenon. — Octavian Berceanu, General Commissioner – National Environmental Guard

The City Air program also has an educational component. We want to explain to students from the schools enrolled in the project how pollution works, what are the long-term effects and how they can reduce it.

We think that information and education are the key points when it comes to changing mentalities. Environmental education should be a priority in Romania, given the fact that we struggle with severe phenomena. Only when we can understand that every action counts, we will be able to change something. — Teodora Iacob, President of Nature Talks NGO