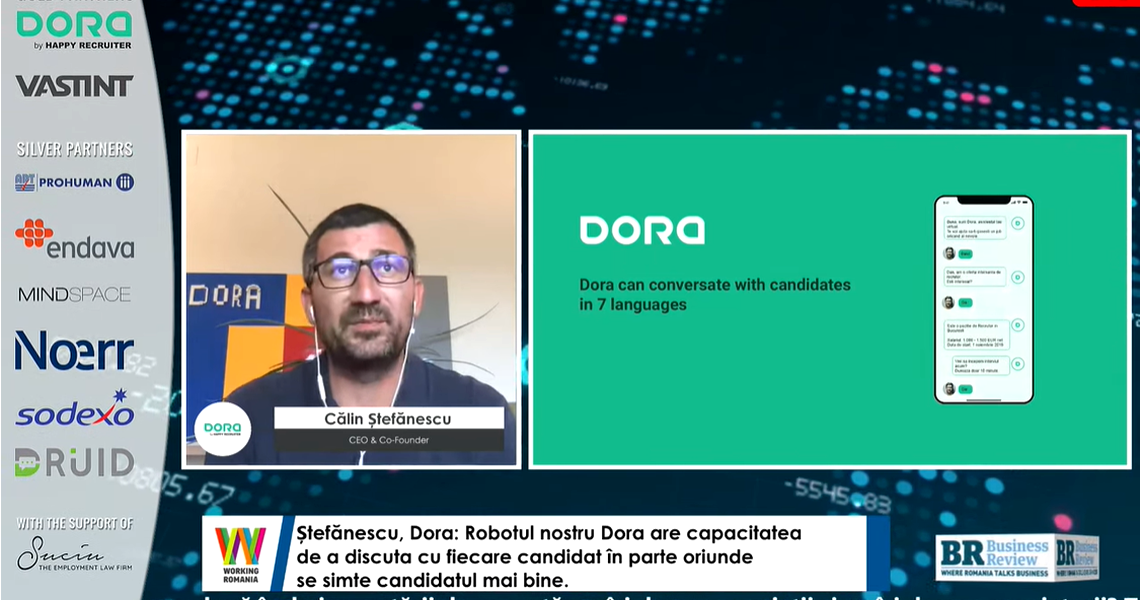 A speaker in the first panel of Working Romania, the biggest HR online conference, Calin Stefanescu, the CEO & co-founder of Dora, The Happy Recruiter, talked us through how the company managed to stay on top of the recent events. Another main point of Stefanescu’s intervention was the release of the most recent Dora study of the Romanian workforce, in exclusivity for Working Romania!

The Happy Recruiter company, the developer of Dora the Recruitment Robot, is a digital company, used to working from home. However, they were affected by the state of emergency caused by the COVID-19 pandemic, as Calin Stefanescu, CEO & co-founder at Dora The Happy Recruiter said at Business Review’s Working Romania event.

„We took advantage of the situation to better organize things. Our level of activity has decreased, but not as much as we anticipated at the beginning. So, we had time to reflect and analyze what and how we do in the future,” said Stefanescu.

All Happy Recruiter employees have been working in the digital are for a long time, each in different fields. The development of a robot that can take on the job of first-stages recruiting started about a year and a half ago. ”We built a robot, Dora, which is very dynamic and adapts to any need of the employer. Mainly, she has the ability to talk to each candidate in the environment in which he is used to working, such as Facebook Messenger,” said Stefanescu.

Dora can also follow up with the candidate in the same way a recruiter does and lead them up to the point where is taken by the employers team. The robot will search for the right candidate internally or externally and get in touch to ask the right questions. ”We realized that currently about 70-80 percent of employees are on social media, Facebook, Instagram, WhatsApp or others. Those are the places where you find the available labor force in Romania regardless of the field of activity,” says Stefanescu.

Happy Recruiter found that one of the challenges companies have on the way to digitization is to adapt to new solutions.

„One barrier was the idea of another software solution to implement, an app that they have to install and learn right after they just got used to the one before. That is why we developed a digital system for recruiting in which the company has nothing to implement or install,” says Stefanescu.

All the recruiter has to do is tell Dora what he is looking for, for example an engineer specialized in Bucharest or an accountant. And Dora starts searching based on the employer’s criteria and asking the questions already defined for the interview. The employer then receives the interview and the candidate’s data and has a communication channel available at all times and decide if they pursue to that candidate or no.

”During this period, when recruitment activity is slow, we thought of getting Dora to talk to people. And he managed to talk to about 30,000 people in five days. We did a market research on how people see the current situation, how many are looking for work. We were surprised to find out that 70 percent of them are now looking for a job. We did the research in other countries, such as Belgium or Great Britain, where I noticed that the appreciation for the job they have is higher than in our country and many fewer are looking for another job,” says the head of Dora the Happy Recruiter.

The next step for the company is to digitize as much as possible the work of recruiters, which for companies will mean a significant cost reduction.” Changes are happening anyway; for example, there are employees who realize that they did not like the job they received or accepted and then look for a new job. And some companies have noticed that it is possible to work with fewer employees, that it is possible to work well from a distance, and these will lead to other changes,” says Stefanescu.

The same situation can be found in other states as well. On the migration of the labor force from one country to another, many people are wondering how they will be able to move due to restrictions, which will lead to areas with fewer staff than necessary. Recruiters will have to adapt to the new situation and find people in their area or work with fewer employees.

„Social media is the digital space where you can find people the easiest, there are 70-80 percent of all employees. And recruitment through social media will be developed more and more. People are using social media for anything these days, including shopping. The problem is with companies that do not yet have a presence on these platforms, especially since the people who contact them expect to be answered very quickly,” concludes Stefanescu.

Large survey of British, Belgian and Romanian people carried out by Happy Recruiter...

#FUTUREOFWORK EXCLUSIVE | Happy Recruiter survey: 2 out of 3 Romanians say their...