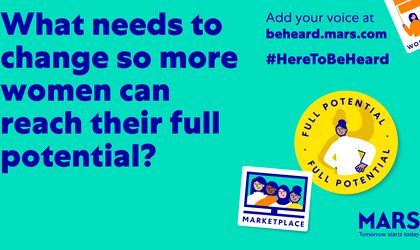 Mars, Incorporated today launched #HereToBeHeard, a new global crowdsourcing campaign that elevates the voices of women from all intersections – including race, age, sexuality, religion and ability – to help shape a more inclusive business environment and create a world where all women can thrive.

As part of the company’s Full Potential platform for action on gender equity in its workplaces, sourcing communities, and the marketplace, #HereToBeHeard asks women everywhere: “What needs to change so more women can reach their full potential?” The responses will inform the concrete actions Mars will take – both within its value chain and in broader society – to close the gender opportunity gap.

Victoria Mars, Mars Board Member and ambassador of Mars’ Full Potential program: “Women have played a powerful role in our history and leadership at Mars. But we have more to do. We’re striving to empower more women within our workplace, and across our extended value chain.

The magnitude and urgency of gender inequality in society demands more action. If global business doesn’t listen and step up now, then when? Business can have an outsized impact on driving change at scale. At Mars we’re seizing this opportunity to expand the conversation and drive action. The #HereToBeHeard movement is about ensuring that all women’s voices have a chance to be heard and translating what we hear into impact plans that advance gender equality.”

“Over the course of the last few years, we have been proud to see a growing number of women leaders in our management teams. The region Hungary/Czech Republic/Slovakia/Romania is proud to be part of this ongoing transformation and in our Mars Central Europe Leadership Team, 5 out 10 members are women. What is even more important is that we continue to work on understanding why the gender gap exists and how we can address it – our #HereToBeHeard campaign takes this approach to the broader society. ” – said Brian Ayling, CEO of Mars Central Europe.

Currently, women make up 51 percent of the world’s population and contribute $28 trillion to the global GDP, and yet so often their voices go unheard. Even before the COVID-19 crisis, the United Nations estimated it would take more than a century to close the gender opportunity gap. Now, the pandemic has set progress for gender equality back by 25 years. Its impact has been particularly devasting for women in minority groups who for far too long have been overlooked in the conversation.

The initial phase of #HeretoBeHeard, where women’s voices will be collected, will run through March; after which the submissions will be analyzed by the Oxford Future of Marketing Initiative (FOMI) at Oxford University’s Saïd Business School. The results will be shared with the world in a study by Oxford this summer and will inform the policies Mars can implement and advocate for in its commitment to unlock opportunities for women.

The data collection will also support the action plans of Mars’ Full Potential platform. Launched last year, the program aims to drive gender equality for all. By putting inclusivity and diversity at the heart of its efforts, Mars has: