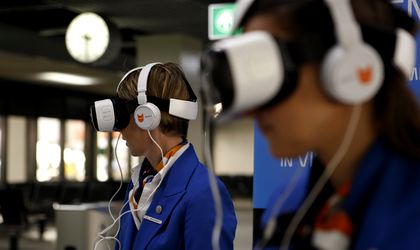 In the post-pandemic world, industries are increasingly moving towards innovation, including in the aviation sector. It is a trend that many companies have mastered, including KLM Royal Dutch. Last year in Seoul, the company unveiled the Flying V, the plane of the future. This year, the company’s focus is to take Virtual Reality (VR) to the next level. With VR technology, KLM employees are trained to do their job, from cleaning crews to cabin crew, baggage handlers to pilots and engine technicians.

Over the past 100 years, KLM’s entrepreneurial spirit and desire for innovation have played a pioneering role in the aviation industry. The company’s efforts focused on improving products, services and working methods for both customers and employees.

Virtual reality is one of the technologies currently used by the company to do this, mainly for employee training. With virtual reality, KLM prepares the cabin crew for emergency procedures such as extinguishing an on-board fire. Also, for pushing an aircraft or attaching a passenger bridge, the company uses the VR experience without the need for the physical presence of an aircraft. Also through VR, KLM trains cleaning crews in external stations when there is a new type of aircraft used on the route. For example, by showing the cleaning crew the Boeing 787 aircraft in virtual reality, they managed to clean the aircraft 15 minutes faster than forecasted and did so without any mistakes.

Pilots trained in the virtual cabin of KLM aircrafts

KLM pilots operating flights on Embraer 175 and 190 aircraft use virtual reality for learning Standard Operating Procedures or SOP’s for the specific aircraft type they are hired to fly. Part of the SOP workout is to explore is to explore the cockpit via touchscreens with an instructor in a classroom and by using posters for visual reference. Other elements of this training are done in a flight simulator.

To facilitate training, but also to reduce costs, KLM’s virtual reality experts have developed a virtual version of the Embraer E175 / E190 cockpit. The virtual cockpit is an exact copy of the aircraft, with all switches and selectable buttons. Thus, pilots prepare for various situations, including emergency procedures such as engine fires or evacuation of passengers. Because the VR model is based on the actual dimensions of the aircraft, pilots can already create muscle memory, which is of great importance in procedures that require rapid action.

KLM uses the Oculus Quest 2 for Business for the VR cockpit training and the HTC Vive Pro for flight safety training. The pushback training is done with Valve Index headsets.

“We will continue to develop the existing courses, for instance by adding a multi-player mode to the cockpit training. We are also looking into getting the VR cockpit training certified by EASA, which would then eventually replace some of the standard training components, such as classroom instruction and textbooks. Our ideas for the near future are to develop an Engine Run-up training for Engineering & Maintenance employees so they can learn in VR how to start airplane engines as part of the maintenance procedure and Airplane Post Evacuation training for cabin crew, where they learn the procedures for landing on water for example. We will also make some of the VR courses available for educational purposes at Intermediate and Higher Vocational Education institutions in the Netherlands,” declared Jae Grant Maloney, New Technology Consultant at KLM.

Video of pilots training in the virtual cockpit: https://youtu.be/czaEQD2vhBI

Video about making a bridge terminal to the plane in VR: https://youtu.be/Ajk0c4ionCs