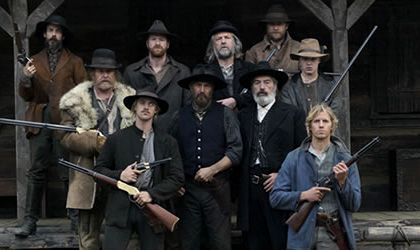 Three Romanian filmmakers, Şerban Porupcă, Adina Bucur and Dragoş Stanomir have been nominated to Primetime Emmy 2012 Awards for the mini-series “Hatfields & McCoys”, a production of History Channel in collaboration with Castel Film, made in Romania.

According to broadwaworld.com, the mini-series was produced by Leslie Greif’s Production Company, Thinkfactory Media, and Kevin Costner as producing partner, chronicles the bloody hostilities between two clans that escalated to the point of near war between two states. The Hatfield-McCoy saga begins with “Devil” Anse Hatfield and Randall McCoy. Close friends and comrades during the Civil War, they returned to their neighboring homes – Hatfield in West Virginia, McCoy just across the Tug River border in Kentucky – to increasing tensions, misunderstandings and resentments that soon exploded into all-out warfare between the two families. As hostilities grew, friends, neighbors and outside forces joined the fight, bringing the two states to the brink of another Civil War.

Their story also includes: a tempestuous love affair between Hatfield’s son and McCoy’s daughter, which had disastrous consequences; the execution of McCoy’s three young sons in retaliation for the Rasputin-like murder of Hatfield’s beloved brother; a New Year’s Massacre of the McCoy clan and burning of their home, which also sparked international headlines; a public clash between state governors; and ultimately the involvement of the United States Supreme Court.

The TV mini-series was successful in theUnited States, where the first episode registred an audience of 13.9 million viewers and was aired on May 28 (Memorial Day).

The making of the film took place in 2011, mostly in Castel Film Studios fromRomania, on locations in Arges andBrasov, over a period of 13 weeks, during which time Kevin Costner, the main actor, was seen in several locations.