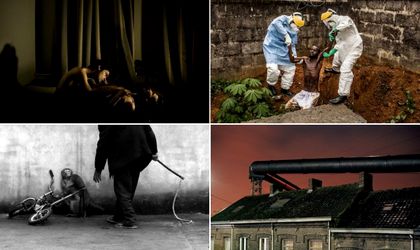 The World Press Photo 2015 exhibition, comprising 160 photos taken by over 40 photographers, was officially opened on Thursday, in the Bucharest University Square, according to Agerpres.

The exhibition is organized in Romania by Eidos Foundation. According to the organizers, it covers about 132 world locations and it is open until May 29. From May 16 to 24 there will be 10 days of film screenings, the organizers also said.

World Press Photo, the most prevailing photojournalism world show, visited by over 3.5 million people every year has touched down in Bucharest through the Eidos Foundation.

According to the foundation, 5,692 reporters and photographers with 131 countries have participated in the 2014 edition of the World Press Photo competition, the show bringing to the Romanian public the selection of the most valuable photo documentation from the 97,912 images on the contest’s book.

World Press Photo, the most important global exhibition of photojournalism, displayed in Romania