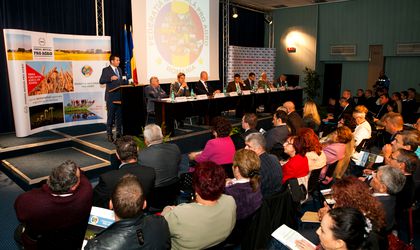 With the launch of the first agricultural mutual funds and a new National Program for Rural Development (NPRD) coming into force, next year should mark a milestone for the Romanian agribusiness sector, bringing about some much-awaited predictability for local farmers. The topic was discussed during the fourth edition of BR’s Focus on Agriculture event and the first national congress of the National Federation Pro Agro.

Some EUR 400 million will be available for Romania as part of the NPDR 2007-2014 program for risk management through mutual funds, said agriculture minister Daniel Constantin during the first national congress of the National Federation Pro Agro. The set up of such funds, which will take on the risks insurers do not cover in Romania, has been much awaited locally, especially in the context of climatic disasters such as last year’s drought.

Moreover, the need for agricultural mutual funds becomes even more pressing when considering that in Romania only 25 percent of the surfaces cultivated in 2012 were insured, according to data provided by Bogdan Pirvu, general director of Fata Asigurari.

While the model is a first for the Romanian market, it has a strong background in Western Europe. Present at the event, Joel Limouzin, president of the Fonds National Agricole de Mutualisation Sanitaire et Environnementale (FMSE) provided specific details on the way such a fund works in France. Offering compensation for economic losses generated by animal or plant diseases or environmental incidents, the fund enables risk-sharing between all production sectors. The underlying concept behind setting up such a fund is opting for “a sustainable compensation policy, rather than crisis management,” explained Limouzin.

The money for compensations comes from EU and national public funds (65 percent) and the members’ contribution (35 percent). The members’ contribution starts at EUR 20 per year for the fund’s general section and this increases for special sections which cover more specific and additional risks, he explained. Decisions on the contribution level, the assessment of losses and compensations are taken by a board which comprises representatives of the fund’s sections, trade unions, animal and plants health organizations, agricultural chambers and cooperatives. While the fund remains private and maintains an entirely private management, the state, through the agriculture and finance ministries, supervises its activity.

It is vital for Romania to learn from the experience other states such as France have with agricultural mutual funds in order to be able to skip unnecessary steps, commented Alex Jurconi, president of the National Federation Pro Agro which has already announced the establishment of such a fund.

Making farming investments less risky will be the immediate effect agricultural mutual funds will produce, but the long run benefit should be more predictability, he argued.

Indeed, more predictability for the local farming sector was the order of the day during the debates. Agriculture minister Daniel Constantin promised the NPDR for 2014-2020 will bring about just that. The future NPDR will feature 13 measures, down from the 24 measures through which EU funds for agribusiness investments are available at present. The focus will be on creating the right incentives for small farmers to evolve beyond the practice of subsistence farming, explained the minister.  In order for this to be achieved, getting farmers to set up and join cooperatives and other similar associations is crucial, said Constantin. Starting 2014, more specific measures to support the development of forms of associations such as cooperatives will follow, he went on. For example, farmers who cultivate less than five hectares of land could see their subsidy per hectare reduced unless they join a cooperative, he explained. Investment programs available through the NPDR will focus on beneficiaries with integrated production chains, thus further stimulating farmers to associate themselves.

When it comes to farmers’ associations, other European countries can once more provide Romanian farmers with a good example. Representatives of farmers’ associations from abroad, such as the Federation of Agricultural Producers Union from Poland (FBZPR), the Lithuanian Chamber of Agriculture, the Hungarian Chamber of Agriculture and the National Federation of Beef Producers from Poland pleaded the case for farmers joining forces in order to better take advantage of market opportunities.